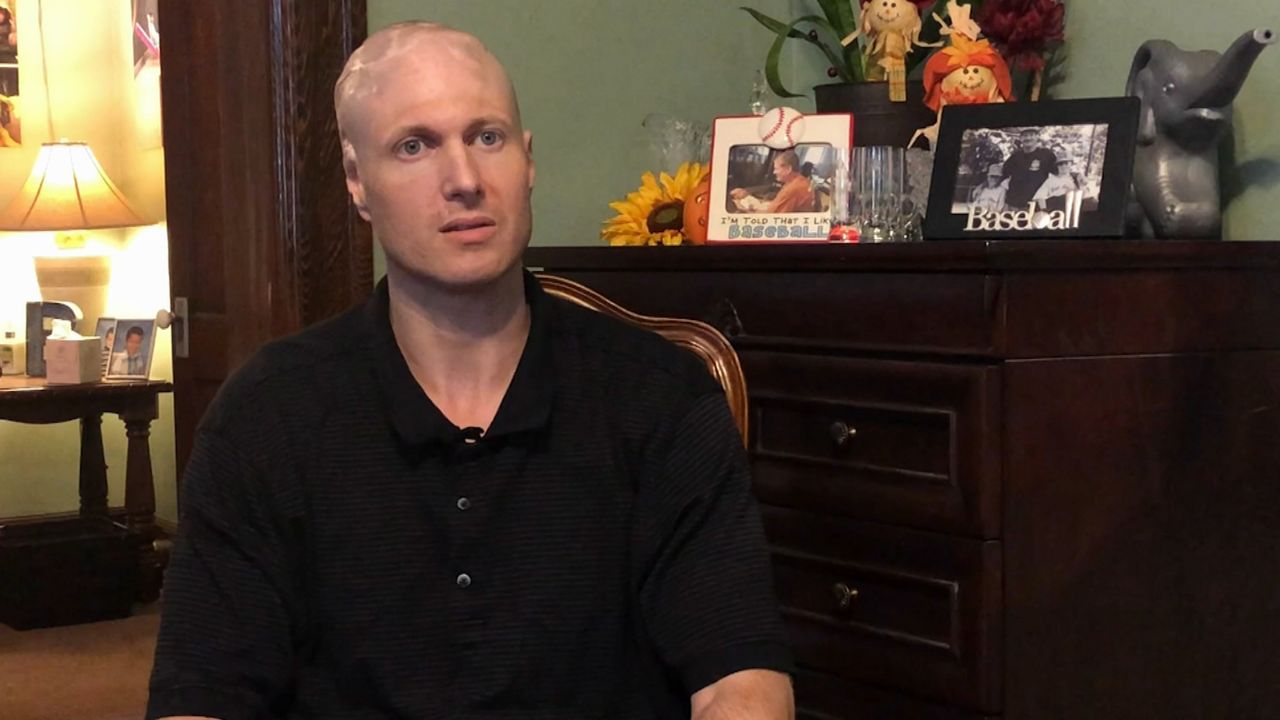 As a little kid, Tim Baginski survived a dog attack and was given pain killers each time he had surgery — eventually he got hooked. (NY1 Photo)

But like so many others, his drug use started with a legal prescription. He was given Percocet as a little kid after a dog attack left him with 496 staples in his head.

Years of surgeries followed, leaving him disfigured. Tim was given medication to deal with the physical pain.

And he followed the dosage rules, until he was about 16. That’s when a friend suggested that if he took twice the dose, he would feel high. That’s exactly what happened.

Baginski says he feels like he lost 20 years of his life to addiction, along with his dreams of playing major league baseball. He says that in his “prime, there was literally nobody that they had ever seen like me and they’re talking about major leagues. So I lost the sport thing that I loved so much.”

“If we look at drug addiction, as an illness, as a disease and have compassion, more than stigma and more than pointing finger[s], and you’re a moral failure, and you’re not good enough, that will absolutely help people to come forward,” Dr. Manassa Hany, medical director at Mount Sinai West’s Addiction Institute for outpatients said.

Doing so is important because the illness has deadly consequences. According to the city’s health department, someone in the five boroughs dies of a drug overdose every three hours.

And the numbers keep rising. In the third quarter of 2021, there were 709 drug overdose deaths. An almost 30% increase over the same period the year before. For those who survive, life can still be grim.

As Baginski battles through recovery, his father, Gene, just hopes he will be happy. Gene regrets he wasn’t able to help his son sooner, but says he missed the telltale signs.

“You see it in the friends. You won’t see it in your own kid. Because you’re blind with love. It’s your own. But you’ll see your son’s friend, and you’ll say ‘that kid’s using,’” he said.

Baginski was arrested in 2019 for selling drugs to an undercover cop and having a gun. After 244 days in jail, the judge offered him a break, probation and treatment while living at home with his parents on Staten Island.

As for many addicts, Tim’s recovery includes group therapy and a drug that reduces cravings. Tim was given Suboxone and says it saved his life.

Now sober, Tim found his way back to the sport he loves, playing in a recreational league near his house. His family is happy to have him back.

“He’s starting to act human again. So I have him back. It’s good to see my son doing good,” his dad said.

As Tim continues his recovery, his advice for others is simple: “Find the positives, do good things. If you do good things, good things will happen. You know what I mean? It’s just that simple.”

Piecing his life back together — one day at a time.