An analysis of the states with the highest and lowest COVID-19 vaccination rates to date shows a stark partisan divide.


The 20 states with the highest rates of residents who have received at least one vaccine dose all went to Joe Biden in last year’s presidential election, while 19 of the 21 states with the lowest vaccination rates supported Donald Trump.

Vaccine hesitancy among Republicans — many with legitimate questions, others influenced by misinformation — has been a hot topic on cable news and social media for months, but the data are bearing out those concerns.

As of Monday, Vermont had at least partially vaccinated the highest percentage of its residents, at 61.9%, followed by Maine (60.6%) and Hawaii (58.8%), according to data from the Centers for Disease Control and Prevention. The six New England states ranked among the top seven nationwide.

The national average is 46%. 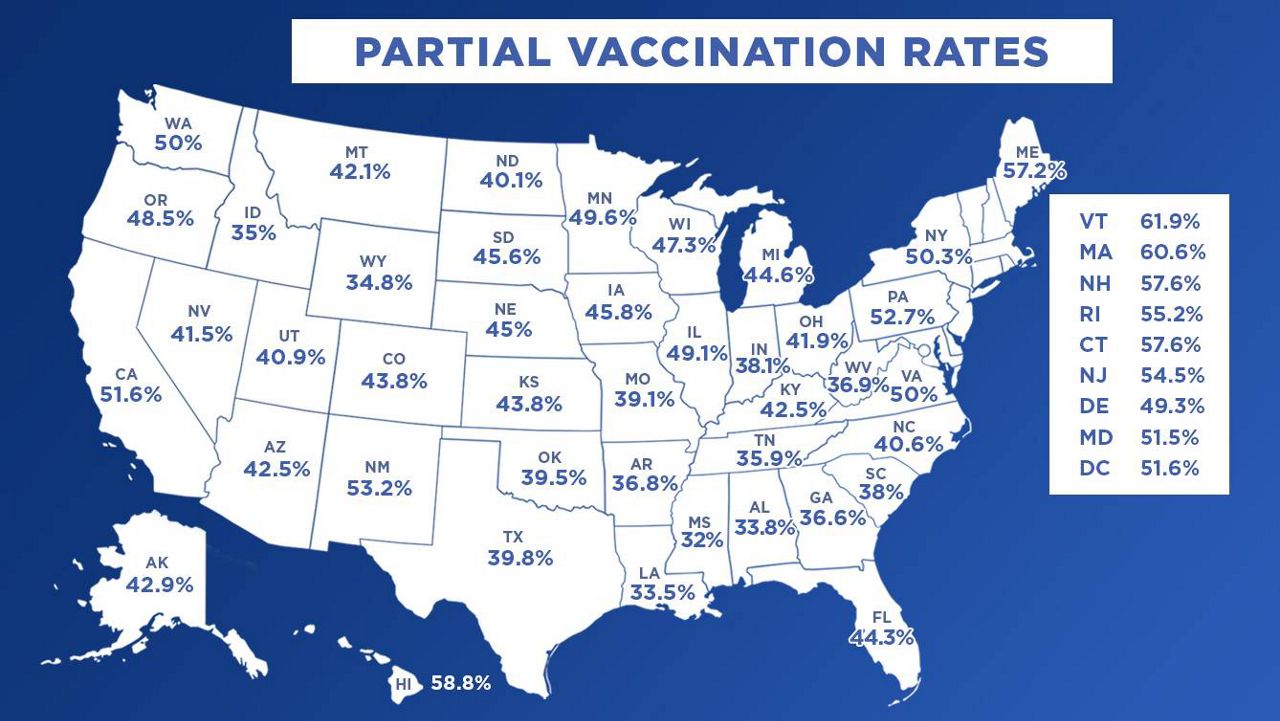 The percentage of people who have received at least one vaccine dose in each state as of Monday, according to the CDC

A study published last month by researchers at University of California San Diego’s Rady School of Management found that Republicans grew more skeptical of a potential COVID-19 vaccine — as well as other inoculation, including the flu shot. Republicans also consistently viewed the coronavirus to be less threatening than Democrats, the study said. The researchers said one potential reason for the disparities is that Republicans and Democrats reported consuming information from different sources.

“We now know that political affiliation is an important predictor of how communities respond to public health concerns,” the study’s authors wrote. “If we understand which areas and communities where vaccine hesitancy may be rising, it can help inform effective communication and health interventions.”

However, while the rate of vaccinations in the U.S. has fallen steadily over the past month, vaccine hesitancy among both the general public and Republicans appears to be dropping. Thirty-two percent of Republicans in an Associated Press-NORC Center for Public Affairs Research poll released Tuesday said they probably or definitely won’t get vaccinated, down from 44% in January.

President Joe Biden has set a goal for 70% of American adults to receive at least one vaccine dose by July 4. Currently that number is at 58.5%.

Five states — Connecticut, Hawaii, Massachusetts, New Hampshire and Vermont —  already have surpassed the 70% threshold, while Maine was on the cusp Wednesday. Fifteen other states have already administered at least one dose to 60%-70% of its adults.

The Biden administration, meanwhile, has announced a series of new initiatives to try to meet the 70% goal, including partnering with Uber and Lyft to provide free rides to and form vaccination sites, and having retail pharmacies and community colleges team up to vaccinate students, staff and nearby residents.

The White House also has changed how vaccine doses are allocated by redistributing more to states where demand is greater.

Federal officials also have been trying to enlist the help of people whom the vaccine hesitant, including Republicans, might be more likely to trust, including faith and community leaders, doctors, and celebrities.

“There's a lot of information that's flowing out there,” White House press secretary Jen Psaki said Tuesday. “And it's not all that misinformation is malintent, and we don't always see it that way.  What our focus, though, is on … is empowering and engaging local voices ...  ensuring that accurate information is coming not just through paid channels or even earned media channels, but also through local, trusted voices. And that is what we have seen is the most effective in breaking through.”