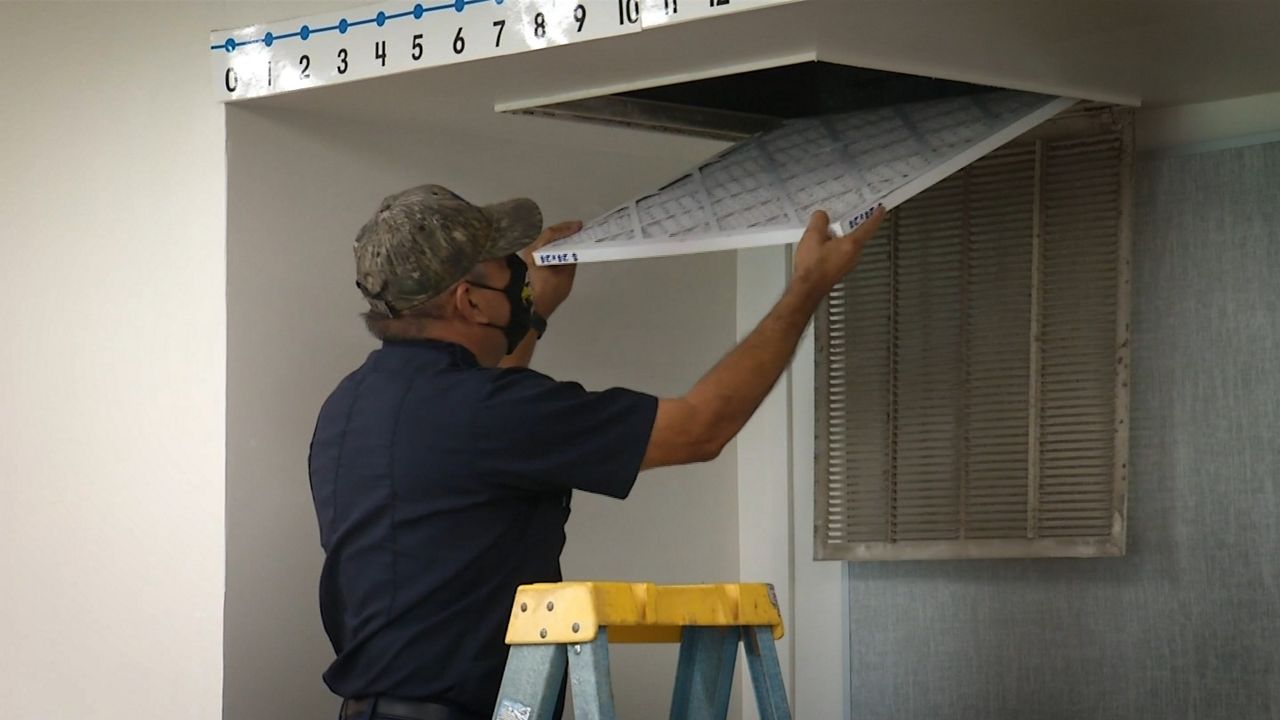 Coronavirus in the Classroom: How Air Flow May be Key to Safely Reopen Schools

As more is understood about how the coronavirus spreads, greater attention is being paid to the air inside schools. National Health Reporter Erin Billups takes a look at the latest recommendations and why it matters.

The indoor air quality of educational institutions has come into laser focus, because we now know that the coronavirus can transmit through aerosols.

“When we talk about aerosol spread and such, it acts like a gas, it floats,” said Dr. Michael Phillips, Chief of Epidemiology at NYU Langone Health.

But many scientists and engineers including those in the American Society of Heating, Refrigerating and Air-Conditioning Engineers (ASHRAE), have been calling on health agencies to make ventilation and filtration a higher priority. In late August, as many schools around the country were already starting the new school year, the CDC updated its schools reopening guidance with more detailed ventilation recommendations.

“The current pandemic is shining a spotlight on ventilation, but it's something that's been an issue for some time,” said Corey Metzger, Head of Schools Team for the ASHRAE Epidemic Task Force. “But what we do know is that improved indoor air quality has a positive impact on student performance. It reduces absenteeism. It can improve cognitive function.”

ASHRAE standards for filtration ask schools to upgrade their heating, ventilation and AC systems to MERV 13 filters, which are more likely to catch particles that could carry coronavirus. Similar to the filtration level used in hospitals.

“It probably is in the range that we capture 90 percent or better of those particles with the MERV 13 filter, whereas with a MERV 6 to 8 filter, we might be at 40 percent more or less capture effectiveness with those levels of filter efficiency.”

Mickey LeRoy, a healthcare project manager at architecture firm GBBN recognizes it’s a heavy lift for schools. “It's unrealistic to think that a school is going to be able to make the kind of capital decisions to upgrade that building to meet a health care standard. But more realistic would be what can they do incrementally?”

The ASHRAE standard says air in a classroom should be refreshed fully with outdoor air about two to three times an hour depending on the room size and number of people in it, which is estimated to remove at least 95 percent of airborne contaminants.

Experts say the easiest way to do that is by opening the windows.

“You have 10 classrooms all in a row and you have one super spreader and one of those classrooms. The air is flowing from the corridor through the classroom. Now, you're sort of minimizing your exposure risk for the people in the room, but also the people that are all in those other classrooms,” said Phillips.

Temperature, humidity and weather all complicate that option.

ASHRAE also recommends flushing the school buildings with fresh air for two hours before it opens and again for two hours after it closes.

For facilities without operating windows or fully functioning HVAC systems, ASHRAE suggests using portable HEPA filters, and says even fans can be used as a stopgap.

“So in those cases, looking at trying to position fans strategically to pull air in one end of the room and maybe out the other. Or get a fan that's moving air at least into the space from outside,” said Metzger.

“That's actually how we brought our hospital that was designed in the 50s, up to the same level of safety as our hospital was designed in 2005,” said Phillips, pointing to NYU Langone’s Tisch building where fans with HEPA filters were installed to create negative pressure and increase air exchanges in the rooms.

If none of those options successfully increase air exchanges, experts say rooms with poor ventilation should not be used.