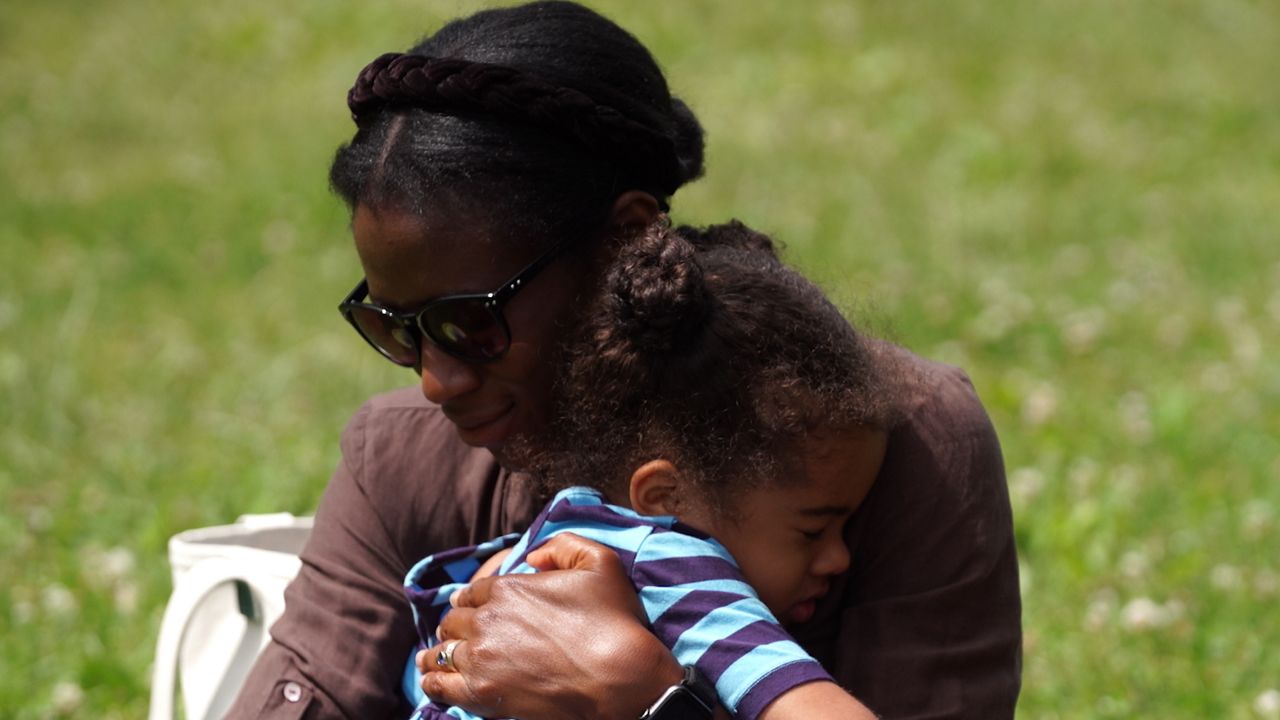 Parents and the Pandemic: Coping with the Stress of COVID-19

This story is the second installment of a four-part Exploring Your Health series delving into the mental health impact of current crises on families and communities across the country. For part 1, click the link below:

In the first part of this series we took a look at the impact of the coronavirus through the eyes of four-year-old Ruby. In part two, we are focusing on her parents.

Things intensified for Camille Hunt when her mother, who lives in Florida, got sick with COVID-19. Hunt lives in New York. “I was just really afraid. There was a couple days where I broke down and I just cried.”

Hunt’s mom is recovering at home, the worst of the illness behind her.

But even before that, for Hunt and her husband Peppe, the daily inconveniences and uncertainty were wearing thin.

“I've taken conference calls in the bathroom,” said Hunt. “I mean, there's like bathroom tile behind my head and I'm sitting on the toilet because that's the only quiet place in my house.”

Hunt says for her, living in an area hit hard by coronavirus carried additional stressors, a heavy toll on her mental load. “One thing that I will never forget about the last four months of my life has been the absolute assault on the senses. You know, like from April [it] was the sirens, knowing that that's going to pick someone up who's gonna go to the hospital and potentially be intubated, it was just awful. Late May, June, it was the helicopters, you know, George Floyd and the protests, which I was 100 percent for. But the low flying helicopters all night long was like another thing. I would be thinking, oh, my God, there's like a bunch of people getting beat by police batons right now.”

With record job loss, social unrest, economic uncertainty, and the complexities that often arise within families, Duke psychologist Timothy Strauman says it’s safe to say many may be dealing with something known as toxic stress.

“History, I think, will tell just how extraordinary this is, and just how stressful it is, and particularly for people who live in communities where they were already bearing a disproportionate burden of what was happening with COVID. You know, more people losing jobs, more difficulty accessing health care, things that were already there that got exacerbated,” said Strauman.  “And then, you know, the police brutality events, sort of highlighted the fundamental inequities. I think people are justifiably upset and scared.”

Large-scale disasters in the past have been followed by spikes in risky behavior – evidence that people are grappling with chronic stress. The month following the September 11 attacks, one in 10 adults in the New York City area showed signs of PTSD. A small study of hurricane Katrina evacuees found more than 38 percent with moderate PTSD, 24 percent with severe symptoms.

The constant barrage of stressors can also lead to worsening health.

“A substantial portion of the brain that is not the part that we think about in terms of rationality and higher-level thinking, it's emotion, it's motivation. It's, you know, protect, when you see a danger, it raises levels, stress hormones. It keeps us from sleeping,” said Strauman. “It does a lot of things that just make it easier to get sick in general and certainly easier to become anxious or having panic attacks, start using alcohol or drugs more.”

As families prepare for a new school year full of uncertainty, Strauman says it is important to set proper expectations, and acceptance even, that the current events are unprecedented, and things are not likely to get back to “normal” anytime soon.

“It's going to be a long time before people feel safe, before they have the economic resources that they need. There's going to be a lot of work to be done after the economy starts to pick up again,” said Strauman. “The history books tell us what happens in terms of mental health, suicide rates, substance use, what economists now call death deaths of despair. We are going to be vulnerable to that and we can prevent it.”

On an individual level, Strauman says there are internal checks to see if you’re ok. “There are things people can do each day. One is just sort of taking the time to recognize what's happening and give yourself a breather. Another one is just look at the ways that you're coping; are you using alcohol, are you doing other things that are maybe not optimal ways of coping with the additional stress?”

Not everyone can get a therapist, but most can buddy up. Experts say having a trusted person who you can share worries, stresses, and pains with is tremendously helpful in maintaining mental health. It helps to buffer against the chaos many of us feel we’re living in.

“Look out to the people around you and see how they're hurting and what you can do to help them, because that's enormously helpful for our mental health as well. A lot of this is going to be people just being aware of how extraordinary circumstances are, taking care of themselves and looking for opportunities to take care of people around them, even in the smallest ways.”

Beyond increased assistance from public health programs, Strauman said employers should work to do more to help their workforces heal. The same could be said of community and religious organizations.

Hunt has started taking more time for herself, meditating, exercising, and finding ways to explain to Ruby how the coronavirus is forcing the world to change, she hopes for the better.

“There just can't be as much pressure you know, so that a person feels like if they don't go in, they're going to be looked down upon or not get a promotion [at work],” said Hunt. “Parents and just people in general, I think just need to be given a little bit more room for life happening, you know, because even little things can throw you off a little bit. And this is a big thing.”