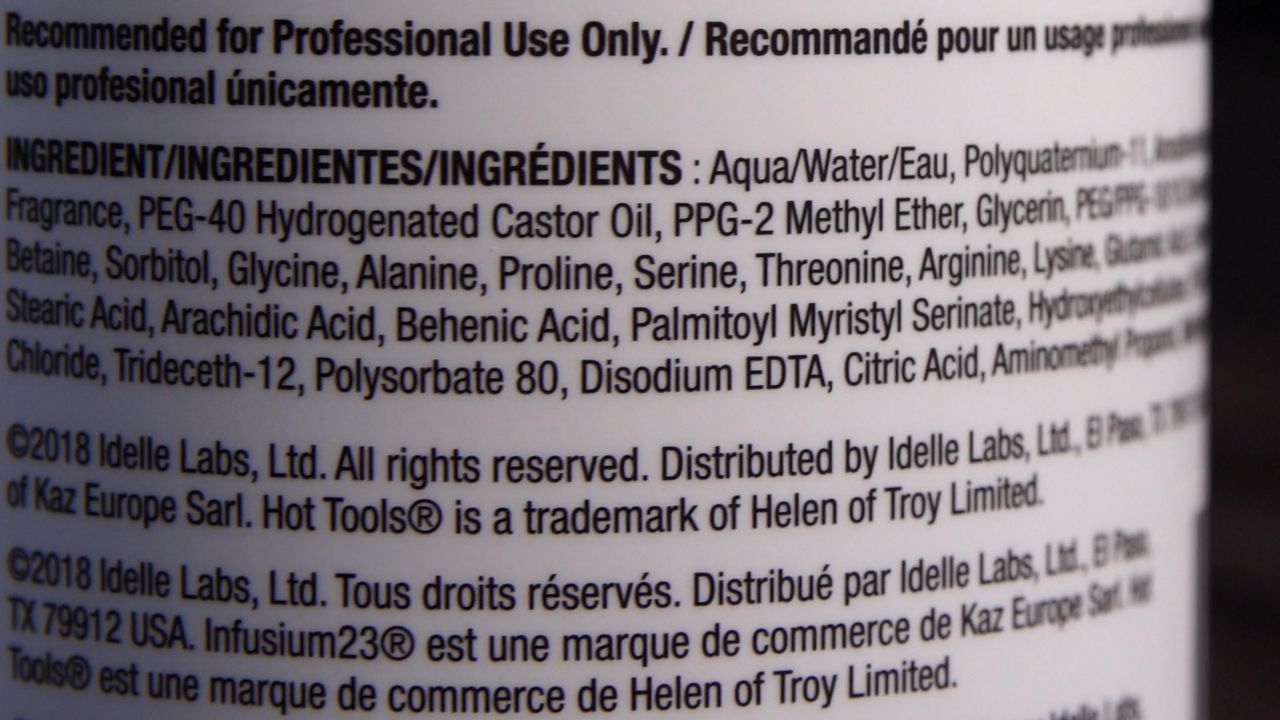 This story is the second installment of a three-part Exploring Your Health episode delving into the potentially harmful chemicals found in many popular beauty products, and the health risks associated with them. All three parts are available now:

Gina LaBeaud was basically raised in a beauty shop.

“My sister, my grandmother were all beauticians. So I grew up with a hot comb as soon as my hair was long enough to hot comb,” said LaBeaud. “I distinctly remember my hair got so long, my mom permed it for the first time.” She was seven years old. LaBeaud recently started working with the LA-based advocacy organization “Black Women for Wellness.” She focuses on reproductive and environmental justice. Through the organization, she works to build awareness around exposure risks.

For LaBeaud, it’s personal. ”I'm concerned that Black women are dying the most of just giving birth. Like that is frightening to me. I could have a child, but I'm scared and I've been exposed to these chemicals. And I do have fibroids. And my mom did have breast cancer and mental illness. So it just feels like the odds are stacked against me,” said LaBeaud. Silent Spring Institute in Boston was founded over 25 years ago to research the links between the environment and women's health with a particular focus on breast cancer.

“I think a lot of people, when they think about cancer in particular and breast cancer specifically, usually think that it's related purely to genetics. They might be surprised to realize that probably the majority of breast cancer cases have some relationship with the environment and that can include chemical exposures,” said Robin Dodson, Research Scientist at Silent Spring Institute.

Through their work with community groups Silent Spring Institute researchers decided to look into the products Black women use.

“Black women face a greater burden of uterine fibroids, for example, or preterm birth. They reach menarche or have their first period at an earlier age than other women. And so there must be some reason for that,” said Dodson. “We know that the exposures are not the same, meaning that these chemicals are not uniformly distributed in our society.”

Many of the chemicals found were not listed on the product containers, or were shielded by the term “fragrance”. The scalp is especially porous, but endocrine disrupting chemicals also enter the body by inhaling the scents.

“As they get into our bloodstreams, they act a lot like hormones. And so anywhere where there might be kind of a receptor where the estrogen hormone might bind it, it's possible that these also might act in that way,” said Dodson. “So over time, if we're always kind of turning on these hormones or initiating these events, that heightens your body to potentially alter, just gradually, what's going on so that we might end up with something like breast cancer later on, or maybe you're just more susceptible to getting uterine fibroids.”

Dodson said, genetics also play a role in whether these chemical exposures lead to disease. “So some people may be more susceptible because of their genetics.”

Researchers believe the impact is likely cumulative, meaning the more a person uses these endocrine disrupting products and the more often they use them, the greater the risk of developing health problems.

A 2019 National Institutes of Health funded study from the University of North Carolina, Chapel Hill supports the work of scientists like Dodson and James-Todd. Using data from more than 47 thousand women of all ethnicities, researchers found that Black women who use permanent hair dye, every five to eight weeks, have a 60 percent higher risk of developing breast cancer. Those who use hair straighteners regularly were 30 percent more likely to develop breast cancer.

The fact remains, though, that many women of color still feel pressure to straighten their hair, in ways that help to make life easier.

“I felt at a young age, that my hair wasn’t good hair. And that had to be manipulated, so I can look pretty and be accepted by my peers, by my family, by my community,” said LaBeaud. Black Women for Wellness is now working with Silent Spring Institute to continue the research, because right now the burden of proof, that many beauty products marketed to women of color are toxic - rests on the consumer.

So what can we do as consumers? More on that in the next installment.