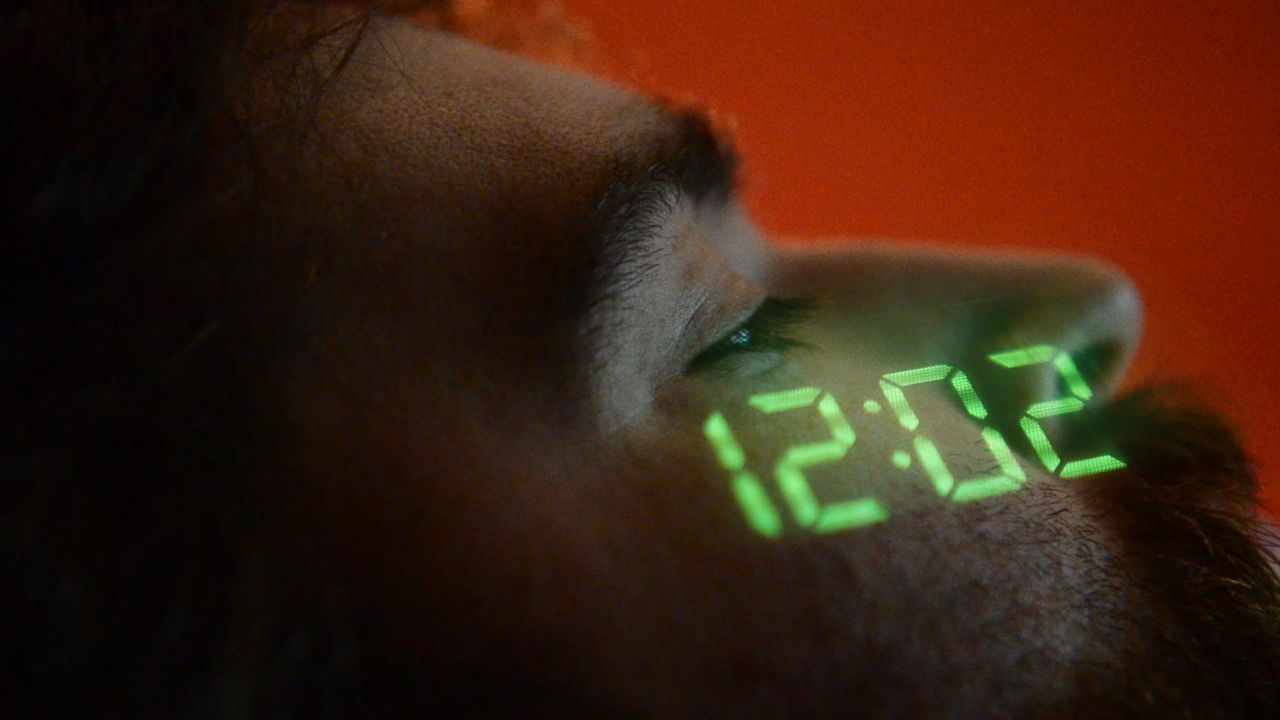 New York is Not Getting Enough Sleep. The Solution May Include Teddy Bears.

So many of us spend our days in pursuit of a good night… a good night’s sleep, that is. Or at least that’s what it seems like. We don’t sleep enough, and then we jump start our morning with a strong cup of coffee. The National Sleep Foundation knows why that is. Its 2018 poll found that just 10 percent of respondents place sleep at the top of their daily activities. Only one in three get the recommended seven to eight hours of sleep regularly.

Dr. Ana Krieger, director of Weill Cornell Medicine’s Center for Sleep Medicine, says compared to two generations ago, people are sleeping a lot less. “I think more or less two hours less of sleep. We are having about 6.9 hours, 6.7 hours.”

Krieger doesn’t believe the trend of sleeping less is intentional. She says it is a by-product of our increasingly tech-centered lifestyles. “There was a lot of changes that happened because [of] the modernization in artificial light, the access to information 24/7 has just made us feel that we were entitled to just stay up because the computer is up. But, unfortunately, we don't work like that. The body is not meant to be awake 24/7.”

Researchers at Albert Einstein College of Medicine are exploring whether educating children about sleep within their pre-kindergarten curriculum will help them perform better in school. Karen Bonuck, PhD, is the early childhood expert leading the study, which is funded by the National Institutes of Health.

“The parents receive a one-hour workshop about why their children need sleep. It goes through the phases of sleep, the benefits of sleep. The teachers learn how to deliver a curriculum to children. Then the children learn the curriculum. It's two weeks, or four days per week, 40 minutes per day.”

Tania Pennaneach is the head teacher of a Head Start class of three-year olds in White Plains, NY. She says she has definitely seen a difference in the children’s behavior since starting the program. “The kids get it. I feel like, in the less than two weeks, they already know eight o’clock is bedtime, healthy snacks, they know the routine for bed. So, when our children do walk in here and they get a good night's sleep, you can see it in the way they're playing. We have a calm classroom.” Twenty-three Head Start programs in New York State are participating in the study, which is based on the Sweet Dreamzzz program. “They're really the foundation for everything that we do. So, Sweet Dreamzzz is a nonprofit. They're the nation's only sleep health education nonprofit geared to young kids,” said Bonuck.

Founded in the mid 1990s in Detroit, Michigan, Sweet Dreamzzz mainly works with lower income families. Program Director Ann Raftery says the non-profit sees its work as a way to help narrow the achievement gap between rich and poor.

“Let's give them that leg up by at least helping them with sleep, because sleep is free,” said Raftery. “We help reach parents where they're at and help strategize with them on certain challenges.” She hopes the program not only helps the kids, but changes the way the whole family views sleep.

During a parents’ seminar at Samuel Gompers Elementary School in Detroit, Raftery explained why it’s so important for kids to have a regular sleep routine. “So, just like that speeding car on the highway has to slow down before it can stop, we have to take our busy, busy, kids and slow them down before they’ll be able to sleep. Ok?”

She asked attendees if they are able to get the recommended 8 hours of sleep. Jacquelyn Whitely, a mother of two boys, says daily, she only gets about four hours of sleep during the week.

Raftery says the program often counsels parents like Whitely on how they might be able to get more sleep, even if they’re bound by odd work shifts. “It's one thing to say, well your child should get more sleep and here's a routine. No, we have to talk to them and meet them where they're at and say well, what could work for you if you're working the shift and you have to go pick up your kids?”

Whitely works the assembly line at one of Detroit’s car manufacturing plants. She says she is getting more out of the Sweet Dreamzzz curriculum for herself than for her kids. “My kids, they're fine. They have their rule saying 8:00 bedtime. But mine, I don't know the last time I got some good sleep. I don't get any sleep. I work 4pm to 2:30 in the morning.”

In May, the World Health Organization formally recognized burnout as an occupational phenomenon within its International Classification of Diseases (ICD-11). Many are familiar with the struggle to get sufficient sleep while balancing all of life’s responsibilities.

Part of the reason so few Americans are getting a full eight hours of sleep is because many are dealing with untreated sleep disorders, including sleep apnea, insomnia, and sleep disordered breathing, like snoring. Drinking alcohol and caffeine too late are also common sleep disruptors, add to that blue light from electronic devices which signals the body to stay awake.

In the 2019 Improving Sleep report written with the help of Dr. Krieger, researchers point out that there are regional differences to how well the American population is sleeping. States that consistently report poor sleep are often states that have higher rates of obesity. Race and ethnicity and access to mental and medical care also play a role in how sleep-healthy a region is.

According to a survey conducted by the United Health Foundation, New York ranks among the top 20 states where adults get the least amount of sleep. 36.7 percent of respondents in the state say they don’t sleep enough. WHY SLEEP IS CRUCIAL

It is only in the last seven years or so that sleep researchers have discovered why it’s so important for us to get good sleep. Essentially, during the multiple cycles of sleep, the brain is systematically cleaned. This process involves the recently discovered glymphatic system.

“We believe it's just clearing out some toxins that are circulating,” said Dr. Krieger. At the same time, connections made during the day, memories, things we learned are sorted and what’s not needed is pruned away.”

Not getting proper sleep may interrupt that process. “Sleep is a critical function of the body,” said Krieger, "because it's such a regulatory system, this process of sleep allows us to improve our mood, to regulate our metabolism, to regulate our emotions.”

This process is really important for the developing brains of children. “University of Michigan studied and concluded that our program brought an additional 30 minutes of sleep to preschoolers each weeknight. So that's really significant,” said Raftery. “There's a lot of research out there that shows how that affects a child's behavior and cognitive ability.”

About 200 of the parents in the program took part in a survey - more than two-thirds of them underestimated how much sleep kids need. These parents assumed children just need eight hours, like adults. “Only about 23 percent knew the correct answer, which is on average [children need] about 12 hours,” said Raftery.

The Stokes family is one of more than 60,000 to participate in the program. When Joseph and Renee had their first child, Arhianna, they had no issues getting her to sleep. Their second child Joey has autism spectrum disorder, with food and sensory sensitivities. For him, bedtime was a struggle.

“The communication piece was a big barrier for a very long time. Just trying to teach him how to say I'm tired,” said Renee.

Then their youngest, Lily, was taught the sleep curriculum at school. “I feel like it's reinforced. At school it's a helpful component,” said Renee. “Lily had to take care of a dog she named, she played with it at school and then we bring it home and it's here and she can put it to bed.” Soon, Joey wanted to take part in the routine. The charts and stickers were a real draw. The Stokes say it’s completely changed the nighttime dynamic in their home. Joey and Lily are well rested and better behaved, giving Arhianna time with her parents after they go to sleep. And it allows for Renee and Joseph to get more alone time as a couple. “We watched a movie last night!” said Joseph.

THE FUTURE OF SLEEP

Ultimately, researchers like Bonuck would like to see standardization of sleep education in all school curriculums. Already, she has worked to add a few chapters on sleep to the latest edition of the Caring for Our Children manual, which provides guidelines for running early child care and education programs. The manual is commissioned by several federal agencies.

It would take a huge societal shift to move sleep to the top of most adults’ priority lists. It is the sort of culture change that may just rest in the hands of younger generations, if they are taught the importance of sleep from an early age.