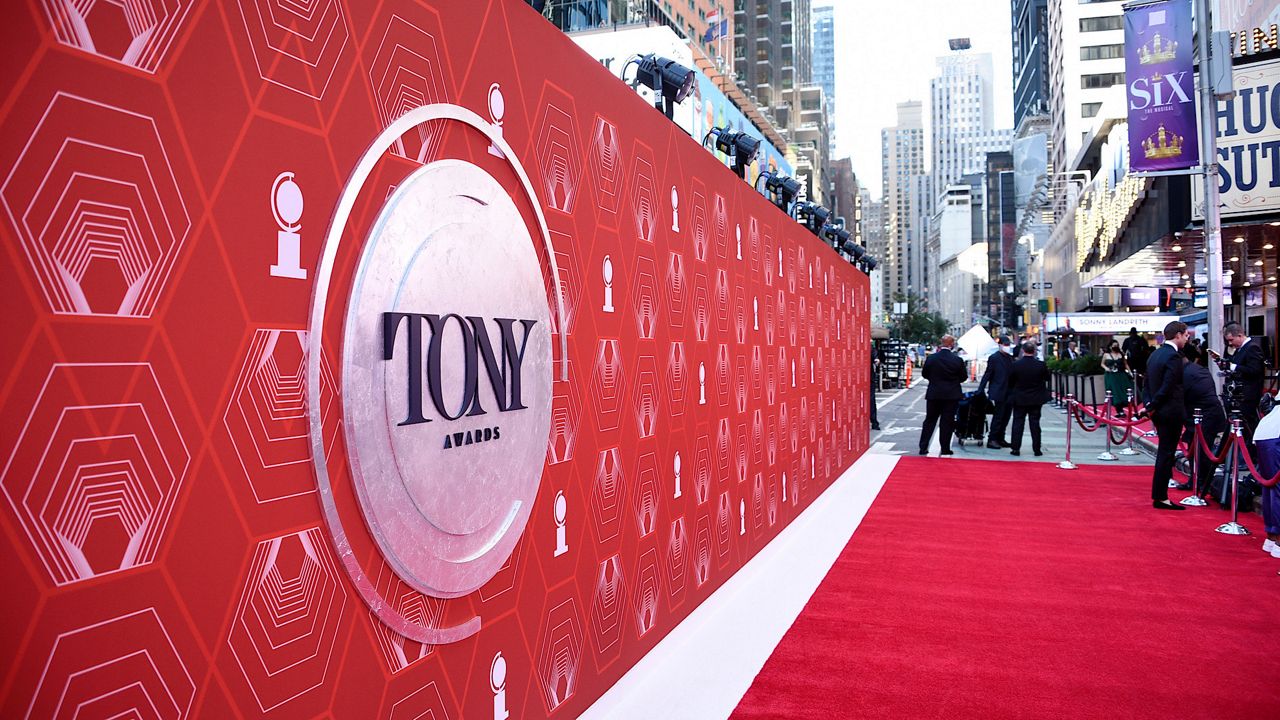 "It was a day I feared would never come. it got dark there for a while, and it's still dark but we're coming out into the light again," said McDonald on the red carpet.

"Moulin Rouge: The Musical" was the big winner of the night amassing 10 Tonys including the biggest award, Best Musical. Danny Burstein won the Tony for Best Actor in a Featured Role in a Musical, for his electric performance as the Moulin Rouge emcee, Harold Zeigler. Not only was this his first win after eighteen Broadway shows and seven nominations, but the win coming at a very poignant time for Burstein.

"My wife passed away in December of ALS and you all showed up for us," Burstein shared as part of his acceptance speech.

Aaron Tveit won Best Actor for his role in "Moulin Rouge: The Musical."

The eligibility window for nominees was shortened due to the pandemic induced Broadway shutdown last year. As a result Tveit was the only nominee in his category. Garnering at least sixty percent of the votes in order to take home the award.

Adrienne Warren took home the award for Best Actress in a Musical for her show stopping portrayal of Tina Turner in "Tina: The Tina Turner Musical".

"It is the ending of a very long epic journey for me and it's a highlight of my life and my career that I will never forget, no matter what happens tonight. And it's also an incredible moment in theater history. We've all been through what we've been through and we're here," said Warren on the red carpet.

Lauren Patten of "Jagged Little Pill," gave a call to action during her acceptance speech for her Best Actress in a featured role in a musical award.

"I want to thank my Trans and Non-Binary colleagues who have engaged with me in difficult conversations and have joined me in dialogue about my character Jo. I believe that the future of the change that we need to see on Broadway comes from these conversations," Patten said as part of her acceptance speech.

"A Soldier’s Play" won Best Revival of a Play. Director Kenny Leon accepting on behalf of the playwright Charles Fuller.

"To Shakespeare, know this, to Ibsen, to Chekhov to Shaw, they're all at the table. But the table got to be bigger," said Leon as part of his acceptance speech.

"Slave Play," which made history for the most ever nominations for a play, went home empty handed. "The Inheritance" nabbing the award for Best Play.

"This is the 74th Tony Awards, and yet I am only the first Latinx writer to win in this category. I say that not to elicit your applause but to highlight the fact that the Latinx community is underrepresented in American theater," Lopez said as part of his acceptance speech.

The night saw a number of special performances including Jennifer Holliday, who brought the audience to their feet with a rousing performance of “And I’m Telling You I'm Not Going” from "Dream Girls".

To mark the momentous celebration, some of Broadway’s favorite leading duos reunited on stage, including Adam Pascal and Anthony Rapp from "Rent," Audra McDonald and Brian Stokes Mitchell from "Ragtime" and Kristin Chenoweth and Idina Menzel from "Wicked".

A number of special Tony Awards were given out recognizing the Broadway Advocacy Coalition, David Byrne’s "American Utopia," and "Freestyle Love Supreme," who closed out the night with a performance.