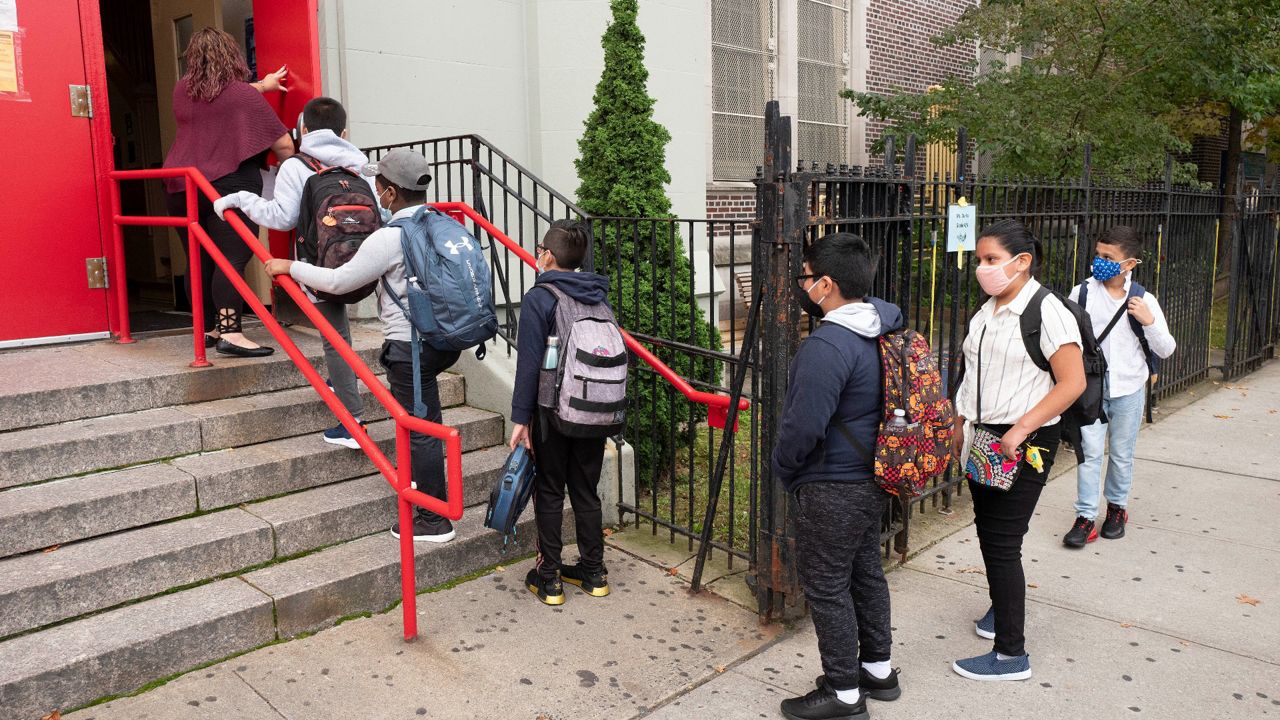 A teacher leads her students into PS 179 elementary school in the Kensington neighborhood, Tuesday, Sept. 29, 2020, in the Brooklyn borough of New York. (AP Photo/Mark Lennihan)

Gov. Kathy Hochul has made it official: city public schools will need to cap class sizes next year.

“My top priority has been to make sure that the children who were so adversely affected by this disconnect from normal life — they’re suffering now, and smaller classes will give them more individualized attention,” Hochul said.

“I’m feeling really really happy for the parents and the students and the teachers of New York City,” United Federation of Teachers President Michael Mulgrew said. “This is decades, decades we’ve been trying to get this done.”

And it’s a setback for Mayor Adams and Schools Chancellor David Banks who had pushed back on the bill — saying it was an unfunded mandate.

“Nobody’s against smaller class sizes. We were always in support of lower class sizes, the challenge was always how do you pay for it,” Banks said.

Smaller class sizes have long been popular with parents and educators, and some studies show it can boost student performance.

Hochul made one tweak to the bill, extending the time the city has to phase in the smaller class sizes by one year, to 2028.

On Inside City Hall Thursday, Banks noted enrollment in city schools has sharply declined, sending class sizes down during the pandemic. He said the city would work with the union and the state to implement the bill and make sure the city has enough resources.

Michael Mulgrew, president of the United Federation of Teachers, says the smaller class sizes during the pandemic showed schools what can be possible.

“What we found over the last two years is that teachers all over the city have said I’m getting to do so much more with my students because we do have smaller class sizes right now. But that’s the reason why we should be doing this right now — I don’t know if we’ll ever have an opportunity to set it up this way, where we have a lot of room in schools,” Mulgrew said.