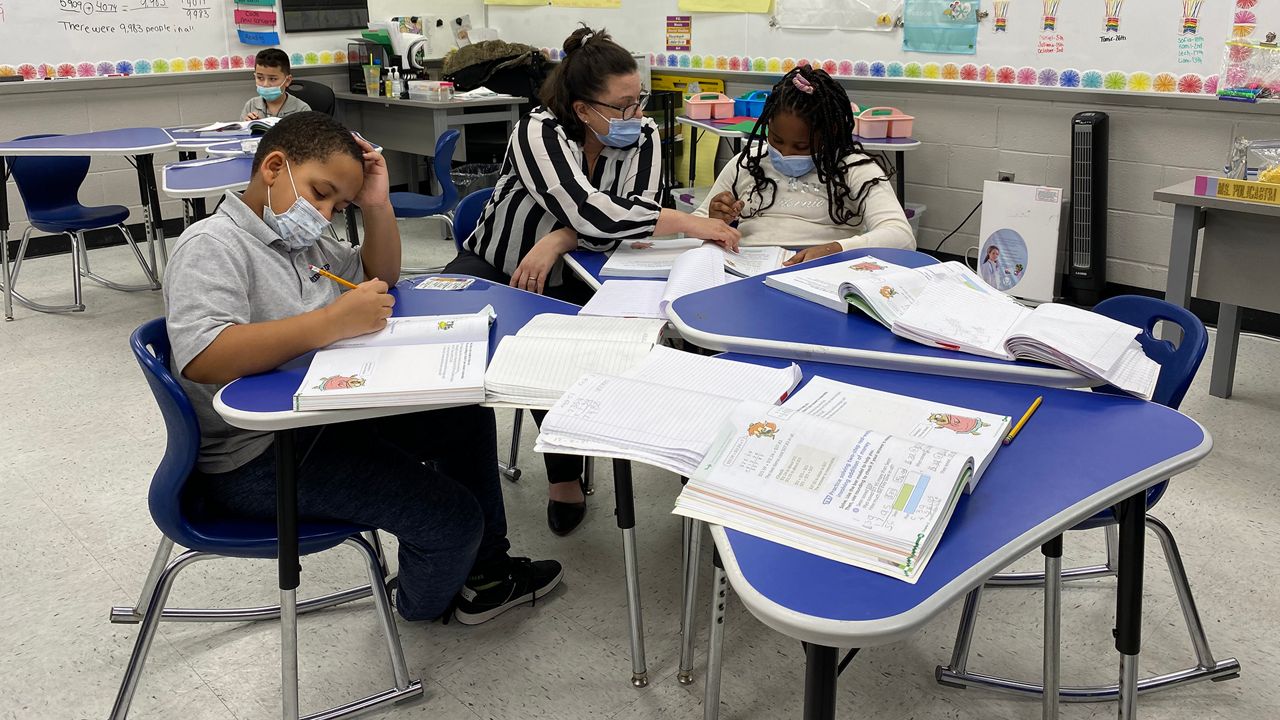 As city eyes new schools for students with dyslexia, one charter school is already serving them

Mayor Eric Adams has pledged to better support students with reading disorders like dyslexia, and Schools Chancellor David Banks has said he aims to open schools specifically for those children. But one public charter school on Staten Island is already catering to the needs of children with dyslexia.

At Bridge Preparatory Charter School, students participate in exercises like breaking down a word and bridging it back together.

“Can you read this word?” the teacher asks a child at the smart board.

It’s an approach aimed at helping struggling readers, and that’s who this elementary school was built for: children with dyslexia and other language-based learning needs.

Not every child here has a reading disorder like dyslexia. The school is open to all. But its lottery gives preference to children with Individualized Education Plans that note they’re struggling to read. More than 60% of the school’s students have an IEP.

“All of our classes are integrated co-taught classes, students with IEPs and students without IEPs learning together, the way it should be in public schools,” Castanza said.

The school uses the Orton-Gillingham approach to teach reading, which breaks reading and writing into smaller pieces.

The method encourages children to use their senses, tapping and tracing letters as they go.

“She’ll put a letter on the smart board,” student Joseph Chiareolo said. “So if it’ll be A, we’ll do A, apple, ah, and then we’ll do the sounds for the letters, and we’ll trace them.”

Other schools use these techniques in teaching reading, but at Bridge Prep, students have a separate, 45-minute daily class devoted to Orton Gillingham.

The school doesn't have a kindergarten, so all of its students come from other schools, where typically, they were struggling.

Adina Sussman said before she came to the school for second grade, she had difficulty reading.

“It was really frustrating, and I needed a lot of help, and I had to get pulled out, and I wasn’t a fan of it,” Adina said.

Now, she gets that help alongside her classmates, and her reading has taken off.

Last month, Schools Chancellor David Banks told Albany lawmakers he was hoping to open a traditional public school for children with dyslexia in each borough.

They might find some inspiration for how to do so right on Staten Island.

“The advocate in me is ecstatic that more kids in this city are going to have an opportunity to go to a school that meets their needs. I don’t know what that school’s going to look like. If it looks like here, they're going to be in a great place,” Castanza said.

Castanza does have some advice. The school was founded in part because Staten Island parents of children with dyslexia often had no public school options and ended up sending their kids to special private schools at the city's expense. Those parents didn't want their children having to attend a school separate from their neighborhood peers.

"That’s not what our community wanted. Kids in our community, parents in the community, they want to go to a school like their peers, but just have their needs met," he said.

To that end, Bridge Prep isn't designed to be strictly a school for children with dyslexia. Instead, Castanza described it as "a school here where kids with dyslexia can be successful."