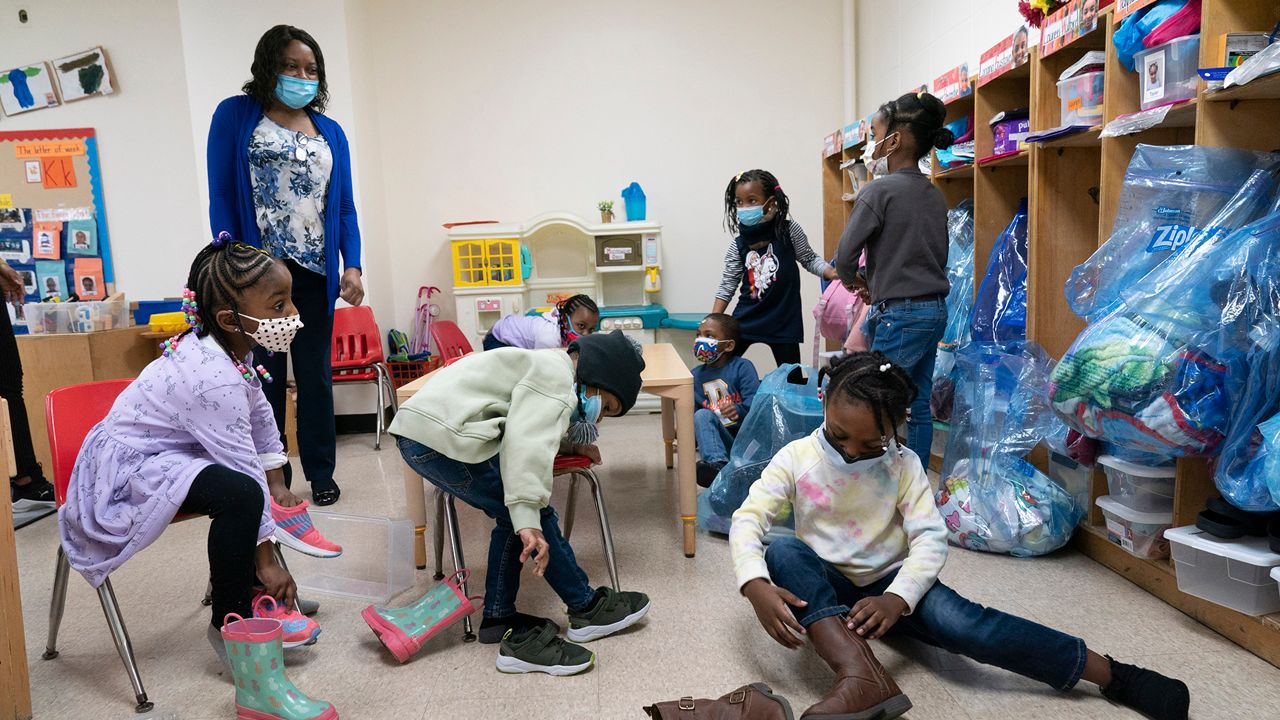 In this Wednesday, March 24, 2021, file photo, Pre-K students arrive for the school day at Phyl's Academy, in the Brooklyn borough of New York. New York City will require all of its municipal workers — including teachers and police officers — to get coronavirus vaccines by mid-September or face weekly COVID-19 testing, Mayor Bill de Blasio announced Monday. (AP Photo/Mark Lennihan, Pool, File)

School staff split on mandate for vaccination or weekly testing

When school starts this September, educators will have to get vaccinated or get tested.

“On Sept. 13, which is the first full day of school, every single city employee will be expected to be either vaccinated or be tested weekly. This means everybody,” Mayor Bill de Blasio said at his daily briefing Monday.

For some educators, that’s a welcome development.

“Our job is to help children, and the most fundamental way we can help them is by not hurting them, and in their families and or even ourselves or each other,” said Arthur Goldstein, a teacher at Francis Lewis High School in Queens, and formerly the school’s union chapter leader.

The teachers’ union is on board with this new mandate, with a spokesperson saying the option for weekly testing “still allows for personal choice.”

“Last year, we were ready to strike to protect our lives and lives of our students,” Goldstein recalled. “Well, that's something worth fighting for. It's not worth fighting for the opportunity to infect them or to die.”

School social worker Justin Spiro has been a vocal advocate for ending remote learning. He said the vaccine mandate will help ensure that happens. He recalled his high school students telling him they learned nothing and had been unhappy during the months of remote learning.

“We can never do that again. So if the vaccine mandate is one way to assure that there'll be fewer quarantines — hopefully no quarantines — next year, then I'm all for it,” Spiro said.

But not everyone is on board. A group called New York Teachers for Choice has amassed more than 25,000 signatures on a petition opposing vaccine mandates for city school staff.

Garrett Ramirez is a paraprofessional at a Queens high school and a member of the group’s steering committee.

But de Blasio argued doing so is the city’s right.

“This is our right as an employer. It is about protecting the workforce, their health and safety, and the people they serve,” he said.

So far, at least 60% of city education department employees have been vaccinated. That number does not include those vaccinated outside the five boroughs.