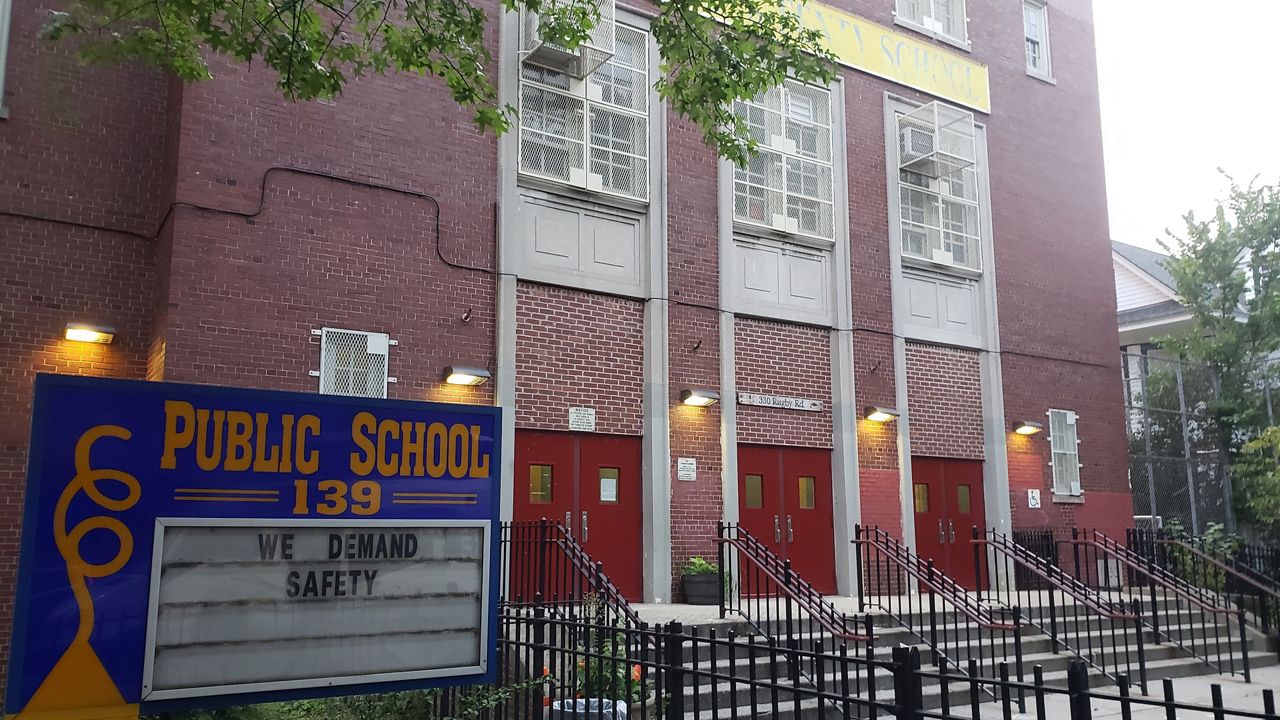 The outside of P.S. 139 in Flatbush on September 15, 2020. The school is closing due to two positive coronavirus cases, education officials say. Dan Rivoli/NY1.

NEW YORK — One day before remote learning begins — and less than a week before students are set to return to school in person — a Brooklyn school will close for at least 24 hours Wednesday after two staffers tested positive for coronavirus, the city Education Department confirmed.

The department said the two cases may be unrelated. The city is conducting contact tracing, to try and prevent further spread of the virus.

It’s not confirmed when and how the employees contracted the virus. Education officials did not confirm if the staffers who tested positive were teachers.

This closure comes after the department announced Friday that P.S. 811 in the Bronx was closed temporarily due to two positive cases. The school reopened Monday after what the Education Department described as a deep clean and investigation.

More than 50 Education Department employees have tested positive for the coronavirus since last Wednesday, when staff reported back to school to prepare for the academic year.

The full list of schools that have seen positive coronavirus cases since teachers began reporting to buildings again can be found at the bottom of this story.

Megan Jonynas, a music teacher and UFT official at P.S. 139, said the second positive case has shaken her faith in the city’s protocols.

“Even though all of us are following all of the rules, all of the protocols, everything we’re supposed to be doing, the protocols that have been put in place by the city and the DOE are not following through for us. So mainly, the testing and trace has been a problem,” she said. “We all agreed to come back because we were promised things would be clean, things would be disinfected, testing and tracing would be in place. Yet, none of these things so far have come out to be true.”

Some parents of P.S. 139 students didn’t blame the school, instead calling out the city.

"I'm pretty disappointed in not our school, but in the system at large and in the mayor,” said Meredith Jacks, a parent of a P.S. 139 student. “I think there's been a lot of wishful thinking, under-preparation, underfunding, and just a lack of seriousness about what it will take to make this return to school possible."

“They are bending over backwards and doing everything, night and day, to get the school ready for us, but they need resources,” parent Laurie Davidson said. ‘They need staff for the blended learning, they need custodial staff.”

Teachers at P.S. 139 refused to work inside the building Monday after the first positive test. They also said they needed more spending on school cleaning, better ventilation, and increased staffing for the school's blended learning program.

They also demanded more transparency from the city about safety protocols, adding there have been problems receiving working thermometers and social distancing floor decals.

"This building is not safe. Two bathrooms, all students and staff," one staff member at P.S. 139 said.

A similar day of action was held Monday at at least five other schools, including the Murry Bergtraum High School For Business Careers in Lower Manhattan.

Before the closure, the Education Department said the custodial staff at P.S. 139 is fully trained, the building is cleaned nightly, and its windows provide adequate natural ventilation.

Teachers started reporting to schools last week to prepare for the start of classes. Remote classes will start on September 16, and students are scheduled to begin in-person classes September 21.

Mayor Bill de Blasio delayed the start of the school year, which was originally set for September 10, after teachers threatened to strike, citing concerns schools would not be ready in time.

The head of the teachers’ union — who was instrumental in hammering out the deal for the delay of the school year — says he does not expect schools will actually open next week.

United Federation of Teachers (UFT) President Michael Mulgrew told NY1 on Tuesday that the lack of staffing and problems with building ventilation have created obstacles with starting in-person learning.

He also says issues with some of the online programs are causing tensions to rise amongst teachers.

"Teachers are getting quite irate. They're like, 'We're supposed to start checking with our students on Wednesday, and the portfolios when we go into the city's system, there is no information inside of it.' So this is why you're seeing teachers more and more out on sidewalks across the city. They're sitting, they're trying to do their work, they're trying to plan, but they're getting very frustrated and angry,” said Mulgrew.

Mulgrew said the union's next steps will be laid out Tuesday or Wednesday after he sees whether each school has created a checklist on how to handle safety precautions for the year.

The city will shut down classrooms, or even entire schools, if students or staff test positive for COVID-19, but the exact action the city will take in response depends on the situation. The school closures so far were confirmed before students report in person and did not meet benchmarks that would necessitate a longer shutdown.

If there is one confirmed case at a school, the city will close the student or staff member’s classroom during the investigation and transition to remote learning — and the classroom will remain closed for 14 days, with students and staff in close contact with the positive case self-quarantining for that time. If there are two or more cases within the same classroom, the city will follow the same procedure.

But if there are two or more confirmed cases of coronavirus among children in different classrooms, the city will close the entire building during the investigation, with all children shifting to remote learning. After the investigation, the classrooms of each confirmed case will remain closed and quarantined, and additional school members will be quarantined based on where the exposure was in the school.

If there are two cases in the school that an investigation determines are linked together by circumstances outside of school — such as two siblings or children who carpool together testing positive — the school will also be closed during the investigation, but will reopen after, with just the relevant classrooms remaining closed.

If there are two or more cases not linked to one another but investigators can determine the exposure happened outside of the school, the school will close during the investigation but reopen after, with relevant classrooms staying closed.

And finally, if there are two cases in different classrooms and the city cannot determine any link other than attending the same school, the entire school will close during the investigation and remain closed for 14 days after.

Should the city’s infection rate reach a seven-day average of 3 percent during the fall semester, schools would close and students would resume remote learning full time.

Temporary school closures due to diseases have happened before. In 2009, several schools were shuttered as the H1N1 flu strain spread in the city.

This story includes reporting from Jillian Jorgensen and Dan Rivoli.

Below is a full list of the schools with positive coronavirus cases, as of September 14, 2020: