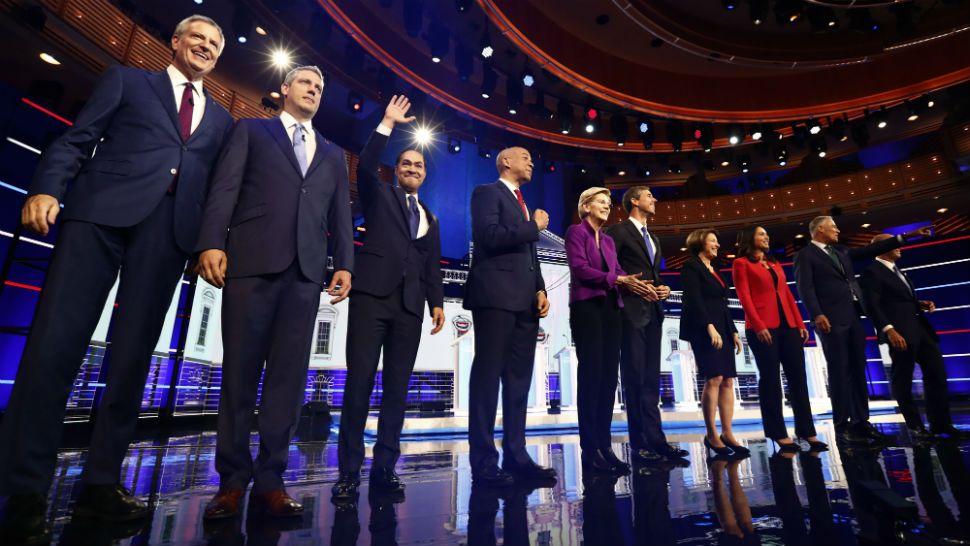 Candidates Clash Over The Issues in First DNC Debate

MIAMI, Fla. — While many expected one of the most recognized names on the stage during the Democratic National Convention's first debate to make a bigger impression, U.S. Sen. Elizabeth Warren saw challenges from fellow candidates Beto O'Rourke, Julian Castro, Bill DeBlasio and Washington Gov. Jay Inslee as they got into verbal matches to outshine each other.

Between the candidates trying to steal the limelight, they touched on many issues that Americans care about during the NBC-hosted debate that is set in Miami.

The 10 candidates on stage were asked which one would abolish private insurance and go with a government-run universal health care system.

U.S. Sen. Elizabeth Warren and New York Mayor Bill de Blasio were the only two to raise their hands.

U.S. Sen. Amy Klobuchar said she did not want to kick people off their private insurance plans if it is working for them, adding that since President Donald Trump, health care costs have gone up.

Warren said that she has signed on to Vermont Sen. Bernie Sanders' (who will be appearing on Thursday's debate) plan of putting people on a Medicare For All plan and then eliminating private plans that offered similar coverage.

Pointing out that families go broke due to health care costs, Warren asserted that the Medicare For All plan solves problems that plague many Americans.

Former Texas Rep. Beto O'Rourke, meanwhile, explained his support for a plan known as "Medicare for America" and not "Medicare for All," and wanting to make sure women can make decisions about the health care of their own body.

"Medicare for America" stipulates that if a person cannot afford medical care with his or her current plan, that person would be enrolled into Medicare, adding that if a person is happy with their current medical care plan, they can keep it. That claim echoes a campaign promise by a then-U.S. Sen. Barack Obama made during his 2008 presidential campaign.

However, when O'Rourke was pressed on if he wanted to replace private insurance, his response triggered several clashes between the candidates.

When O'Rourke started to shoot back that Americans are not happy with their coverage could select Medicare, de Blasio asked him why he was defending private insurance.

Washington Gov. Jay Inslee said he is the only candidate who has passed a law protecting a woman's right in reproductive health in health insurance and passed a public option.

Then Klobuchar jumped in, saying that all three women on the stage have done more to defend a woman's right to choose than any of the men on stage.

She added the public option to use Medicare or Medicaid without insurance companies will see more people getting coverage.

Former housing secretary Julian Castro believes in "reproductive justice" for everyone, including the trans community and for women who do not have the right for an abortion in certain states.

New Jersey Sen. Corey Booker mentioned the opioid crisis that is impacting his state and other states like Florida, and said the drug companies that make the drugs should be held criminally responsible for the crisis.

He wants those companies to pay for the "solutions that are working" but did not mention what those solutions are.

When asked if she would still implement changes that might stifle the current strong economy, Warren answered that the economy is only great for the "1 percent" and the drug companies, for example, but not for those trying to get a prescription filled.

"When you've got a government, when you've got an economy that does great for those with money, and isn't doing great for everyone else, that is corruption, pure and simple. We need to call it out, we need to attack it head-on," she said.

Later, Klobuchar sidestepped a question about free education and said that not everyone is sharing in the prosperity of the economy.

O'Rourke, a former Texas congressman, was made to answer the original question that was asked of him before he sidestepped it, which was: Would he support a 70 percent individual marginal tax rate?

He said that he would support a tax rate and a tax code that is fair to everyone, but would not answer the question directly.

When asked about the role of corporations and not breaking them up, Booker replied there is a serious problem in corporate consolation and there is an economy that is hurting small businesses that does not allow them to compete.

Rep. Tulsi Gabbard of Hawaii, who enlisted into the Army National Guard after 9/11, said she would invest tax dollars into such things as healthcare and a green economy.

Warren said that there needs to be a green technology to help grow new jobs, and "green energy is the way to go," but those jobs have to be created in the U.S. and American companies need to be the leaders and owners of green-manufacturing jobs.

Gov. Jay Inslee of Washington says plans are great, but he is a governor with a track record. He says he is proud to stand up for unions and wants to increase wages.

He also blasted McDonald's CEO for making "2,100 times more than the people slinging hash at McDonald's."

Inslee also took a jab at the president.

"Donald Trump is simply wrong. He says wind turbines cause cancer. We know they cause jobs," he declared as he pushed for clean-energy jobs.

When asked about wealth inequality and the pay gap between wealthy and the poor, which is especially large in his city, de Blasio said New York has fought to raise the minimum wage to $15 per hour and to put money back in the hands of the people, with paid sick days.

He then called on his fellow candidates and his party to "be bold" and embrace an unabashedly progressive agenda.

Warren called for government to treat gun violence as a national health emergency, tackled with research. She suggested banning "the weapons of war" and do research on what can be done to stop the shootings.

However, she was quick to point out that the guns used in crimes are different from those used by responsible gun owners and collectors.

Booker, meanwhile, said that people should have a license to own a gun the way they need a license to drive, adding that he claims he can hear gunshots in his New Jersey neighborhood.

Congressman Tim Ryan offered a different take to the gun issue, such as the government starting to do something about the trauma for the kids dealing with school shootings.

He also said he would like to see schools have a mental health counselor to help a student to deal with stress or bullying before he or she takes a step to become a school shooter.

Asked for his take on the topic, O'Rourke says there should be a universal background check for gun purchases and a ban on assault weapons, saying those two topics are things that both Democrats and Republicans agree with.

On Iran and current tensions in the Middle East, Booker was firm when he said it was a mistake to pull out of the 2015 nuclear accord.

Under that deal, Iran agreed to limit its enrichment of uranium and would submit to U.N. inspections in exchange for the lifting of economic sanctions.

However, in 2018, President Donald Trump pulled the U.S. out of the agreement and imposed stronger sanctions to pressure Iran for a better deal.

It was imperfect but a good day for that moment, says Klobuchar. She says Trump promised a better deal, but did not deliver.

Trump made Americans less safe than they were before he became president, she declared.

Calling on her military service and experience, Gabbard said a war with Iran would cost more lives and be an even longer conflict.

Asked about her "red line," she said if there was an attack on U.S. troops, there would need to be a response.

However, she says Trump and his "chickenhawk" cabinet are creating a situation that might provoke a war, and the president needs to swallow his pride and get back into the deal.

When finally given the opportunity to weigh in on his signature issue, Inslee said America is in a climate crisis.

He said as governor of Washington, he has passed a 100-percent clean electrical grid bill and that his state's progress is a gold standard that is putting people to work, and claimed he is the only candidate who is making climate change a top issue.

O'Rourke, meanwhile, put forth his goal to free Americans of fossil fuels. Ryan followed by pointing out the Democratic Party has a problem in not connecting to the working class, calling them "forgotten workers" who would benefit from green jobs.

John Delaney, the former Maryland representative, talked about how he was the only one who introduced a carbon-tax bill in Congress that had support from both parties.

The stage was not the only place where political followers tuned into as the spin room gave interesting insights to the DNC debate on Wednesday night.

The Spin Room — where Republican and Democratic leaders give their impressions of the debate as well as counterpoints to what was said on stage — in the Ziff Opera House in Miami certainly presented a lot of interesting takeaways.