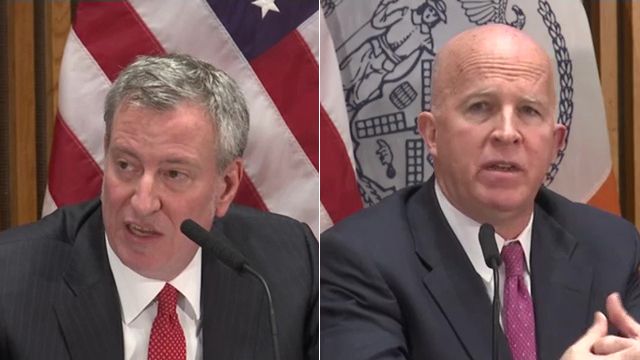 Mayor, commissioner say disciplinary records do not give true picture of NYPD

NYPD Commissioner James O'Neill says the media should start focusing less on the bad apples in the police department and more on the improvements at the NYPD.

"There's little attention paid to the positive changes in policing in general and in this police department in particular, no matter how effective they may be," O'Neill said.

BuzzFeed revealed that 319 police employees who lied under oath, assaulted innocent people and committed other misconduct were given probation and allowed to stay on the force even though they could have been fired.

O'Neill emphasized that bad officers are often kicked off the force.

"Since 2014, there have been 362 officers that have been terminated or left with disciplinary proceedings pending. One hundred and ninety-nine of them were forced out or terminated," O'Neill said.

BuzzFeed reported that from 2011 through 2015, at least 50 NYPD employees lied on official reports or under oath. Another 38 were found guilty at department trials of excessive force, fighting or firing their gun unnecessarily. Fifty-seven were guilty of driving under the influence.

In each of these cases, the police commissioners at the time, Ray Kelly and then Bill Bratton gave the officers probation.

"You need to judge by their leadership, which has been resolute and fair throughout," de Blasio said. "And I have been in the discussions and heard each of them speak about the decisions that they made and why they made them. I think they call them as they see them."

The mayor and police commissioner say the are bothered by the perception that officers are not reprimanded when they do something wrong. They say they take discipline very seriously.

Both de Blasio and O'Neill said they have lobbied lawmakers in Albany to change the state law that keeps police disciplinary records secret.

"We need to get real about this," de Blasio said. "This disclosure is something the public is demanding and they have a right to."

"We need for it to be more transparent," O'Neill said. "And I couldn't agree with you more."

Overhauling the law will not be easy, though. The powerful police unions have long opposed any changes.