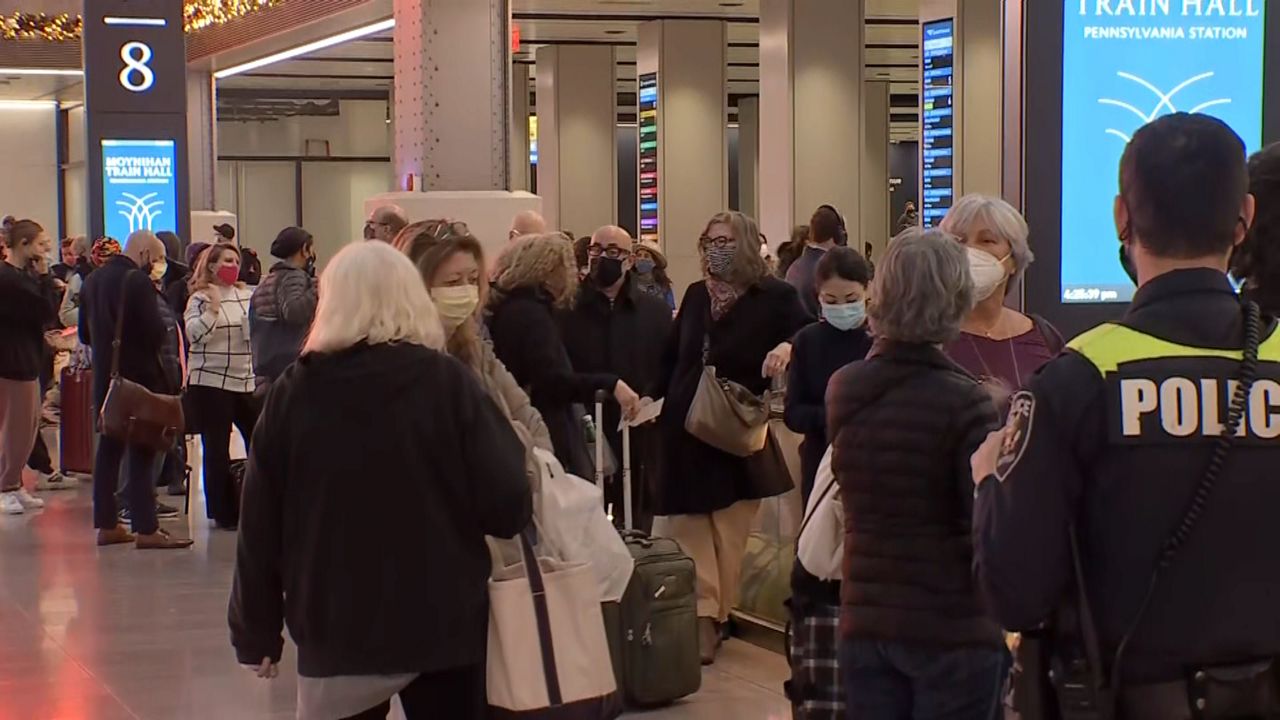 Moynihan Train Hall in Manhattan on Nov. 22, 2021, filled with people getting an early start on Thanksgiving travel. NY1/Dan Rivoli.

NEW YORK — Many travelers at Moynihan Train Hall on Monday evening were getting a head start on their Thanksgiving treks — a smart move, as it is expected to get much busier through the week as millions of Americans head out to see friends and family for the first time in over a year.

Tatiana Glover was one of them.

"I haven’t seen my aunt in in like a year-and-a-half now," Glover said. "So I’m really excited."

“I haven’t hugged her in a really long time," Glover said. "I got COVID tested, I’m vaccinated, I did all the precautions just to make sure that it’s a fun time but we’re still safe.”

Sue Sodoma of Rochester said she was planning a drive down to Atlanta to see her sister’s family.

"The last couple of years we haven’t been able to travel, so we decided to take a chance," Sodoma said. "I know gas prices are higher this year, but family is important and you never know what the future has in store."

Even rising gas prices — an average of $3.56 a gallon in New York — could be little deterrence for the determined holiday motorist.

"It’s going to be tough for a lot of drivers," said Robert Sinclair, a spokesman for AAA Northeast. "But having said that, I think with so much pent-up demand and wanderlust, that a lot of drivers will throw caution to the wind and spend whatever it takes to take that driving trip.”

Airports will also be busy, though Brett Snyder, a blogger at Cranky Flier, said the spike in oil prices came too late for people to switch their travel plans and leave their cars at home.

“For this year, it'll probably be pretty similar to what we’ve seen in the pre-pandemic years, when it comes to number of people traveling," Snyder said. "It’s gonna be crowded, flights will be full — all of that will be the same."

Luke Hughes, who flew in from Los Angeles last week, beat the rush to reunite with his family in New York.

“It was good, everything was on time, it wasn’t too packed," Hughes said.

And his mother, Karen Hughes, took Amtrak down from Boston.

"It’s been such a long time," Karen Hughes said. "In between we haven’t spent Thanksgiving together in a long time.”