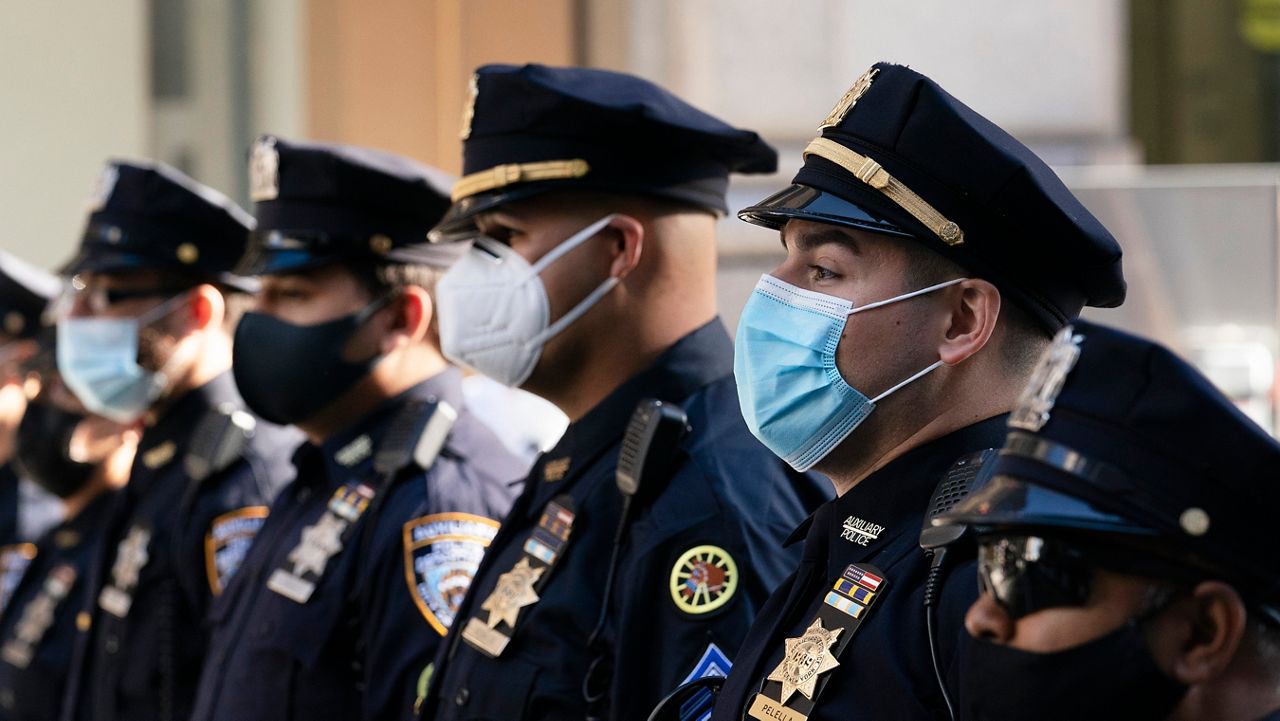 Asked if police officers should be subject to the same mandate as city health care workers, the mayor did not rule it out Thursday. (AP Photo/Mark Lennihan, File)

With low vaccination rate, could NYPD be next to face a mandate?

NEW YORK — Since the start of the pandemic, thousands of workers in the city's uniformed services have been infected with COVID-19, including more than 11,000 in the NYPD alone.

Thursday, it was suggested to Mayor Bill de Blasio that many of them believe they don’t need the vaccine, having acquired sufficient antibodies.

“This is in the category of, ‘Give me a bleeping break,’” the mayor said. “When did everyone get a medical degree? You know, I'm sick of everyone armchair-saying that they know more than the doctors.”

The comments were part of an abrupt change in tone this week from the mayor, who's voiced frustration at New Yorkers who still refuse to get vaccinated.

Wednesday, he announced city health care workers will soon have to submit to weekly COVID-19 testing if they can’t show proof of vaccination.

Asked if police officers should be subject to the same mandate, he did not rule it out Thursday.

The NYPD can’t say what percentage of its officers are vaccinated, only that the department itself administered the vaccine to 43% of service members. The FDNY, meanwhile, has a roughly 55% overall vaccination rate.

In a statement earlier this week, an NYPD spokesperson said: “Our newest internal messaging focuses on addressing rumors, misinformation and concerns with vaccination. While we have stopped short of compelling uniformed officers to be vaccinated by rule - which would likely face lengthy legal challenges - we have focused our efforts on strong education and encouragement.”

But the statement also noted that those officers previously infected have a far lower likelihood of re-contracting the disease. That’s not been part of the messaging from City Hall, which is strongly encouraging all residents to get vaccinated, regardless of whether they were previously infected.

The mayor said while antibodies have an impact, it pales in comparison to vaccination.

“It was fine for a while for people to hang back, and they wanted more information and they wanted to see how it went,” he said. “I think we have a pretty good sample size — 150 million people got vaccinated. What, do you need more to be convinced?”