NYC metro area office occupancy on the rise, but still below 20%

NEW YORK — The sounds of spring are back in Bryant Park, with lawnmowers cutting the grass and even office workers gabbing over lunch in the sun.

However, the largest green space in Midtown, Manhattan, normally fills with office workers this time of year: 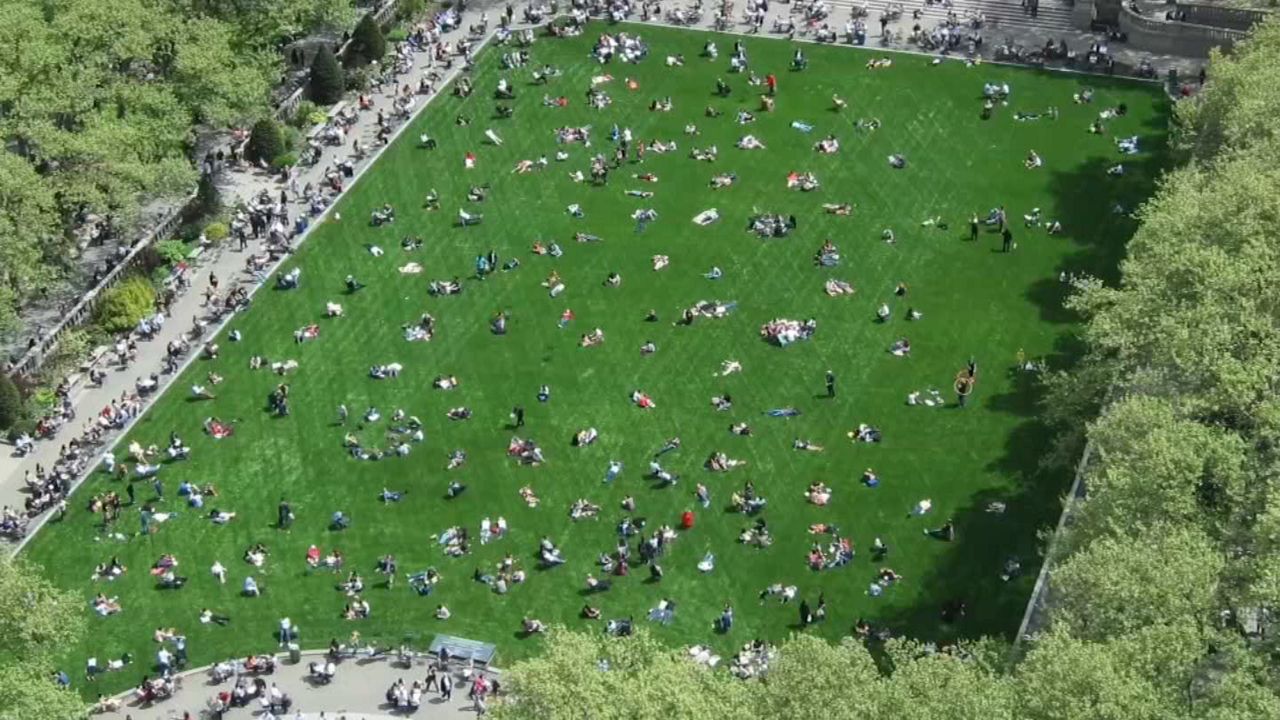 (A typical crowded afternoon in Bryant Park in previous years.)

“Right now, it’s empty," said Phil Perry, who has worked in the area for decades. Perry who works in banking explained that in "years past, on a nice sunny day like this, you wouldn’t see a square inch of open lawn. It’d be blanket to blanket with people playing Hacky Sack, frisbee, the whole nine yards. Right now, I’d say you’re at 20% of what’s the norm.”

Perry says his office is at 50% capacity, with people alternating each week working from the office and at home.

“It’s more productive, being back in the office," he said.

That and vaccines, experts say, are driving up the return to offices and occupancy rates.

Kastle Systems, which manages security at 275 buildings in New York City, says its data shows office occupancy started dropping in March 2020. During the week of April 15, 2020, it hit the low of 4.3% of pre-coronavirus pandemic levels. It worked its way back to 10% in July and 16% in October.

The winter holidays dropped it back below 10%, but it climbed since then. As of Wednesday, it was back up to 17% of pre-pandemic levels.

Still, New York and San Fransisco are the two major cities in the country with the lowest occupancy rates. Nationwide, the average office occupancy is 27% of pre-pandemic levels.

“New York, when you look across major markets across the United States, has been amongst the very slowest to return to the office, which I think we can explain by how hard the pandemic hit New York at the beginning,” said Mark Ein, the chairman of Kastle Systems.

San Fransisco is the lowest, he says, because the large tech sector there was already prepared to go remote and can more easily embrace it than other industries.

Ein believes the numbers will increase as many working-age people are fully vaccinated after Memorial Day, and tick up steadily over the summer with a giant jump again Labor Day.

"We can see the light at the end of the tunnel," said Brian Soto, Time Equities Inc.’s Director of Acquisitions and Asset Management.

Soto agreed office workers will return in bulk in September to the roughly 1 million square feet of New York City commercial space Time Equities Inc. owns and manages, but says he expects a bump after the July 4th holiday as well.

“We’re seeing more deals happen. We’re seeing more tours happen,” Soto said. “My head of sales and leasing, she has said she has not seen this much activity since the spring of 2019, so we’re very encouraged.”

Workers like Perry know it’s just a matter of time before things start to fill up at Bryant Park and in their offices.

Most NY1 spoke with agreed: there will now always be a component of working from home that didn’t exist before the pandemic.

But a psychologist we spoke with while he was taking his lunch in the park was focused on the positive:

“Just seeing people enjoy each other again... we’re in Bryant Park. It’s like, the grass is greener. I don’t know, it’s like the trees are just, like, smiling at you," Dr. Jairo Gonzalez said. "We're back and we'll thrive."