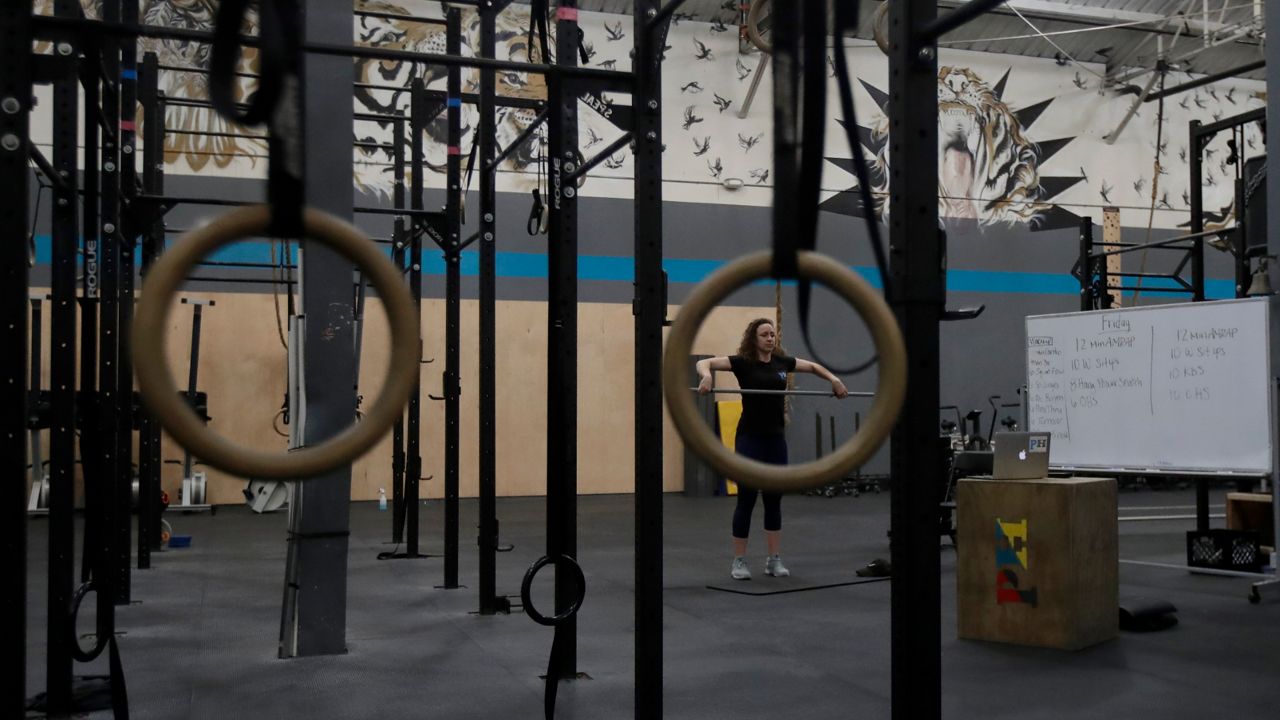 Alexis Garrod, CrossFit Potrero Hill partner and head coach, demonstrates an exercise to participants while instructing a class over Zoom in an empty gym, which closed for shelter-in-place orders over COVID-19 concerns, in San Francisco, Friday, April 24, 2020. (AP Photo/Jeff Chiu)

Hachadoorian said each day his gym in Long Island City sits empty brings him closer to the possibility his business may not survive the pandemic.

“There’s been a lot of sleepless nights,“ said Hachadoorian.

He’s getting by with some outdoor classes, but because he owes at least $50,000 in back rent, it’s not enough.

Gyms across the state had expected to be back in business a few weeks ago under Phase Four of the state's reopening, but Governor Cuomo decided to exclude them, because of fears the gyms would enable the coronavirus to spread.

Hachadoorian and about 1,500 other gym owners across the state have joined a $500 million class-action lawsuit against the state. They argue, considering the state allowed tattoo parlors, tanning salons and health spas to reopen, the governor’s reopening plan is unequal, random and arbitrary, and violated their due process.

“Give us the guidelines. I think any gym owner would follow them because we want to do the responsible thing. We want to be socially responsible. We want to help the people in our community to work out and be healthy,” said Hachadoorian.

Some gym owners who joined the suit argue that they are essential businesses during the pandemic.

“Everything that is going on outside that is causing more anxiety and depression right now, they need it even more now," says Michele Gretano, co-owner of CrossFit Bridge and Tunnel.

A spokesperson for the governor told NY1 that Cuomo's his action regarding gyms and fitness centers was legal and was intended to and did curb the COVID infection rate and that most New Yorkers support the governor’s reopening plan.

“If we beat the virus then he shouldn’t have any emergency powers, he should let businesses open and let everyone earn a living,“ said the attorney representing the gym owners, James Mermigis.

A hearing is set for next week. A ruling in the gym owners’ favor could allow them to reopen right away. A ruling against them will mean more waiting and more uncertainty.

“The positive mindset is being, you know, slowing being pulled away,“ said Hachadoorian.