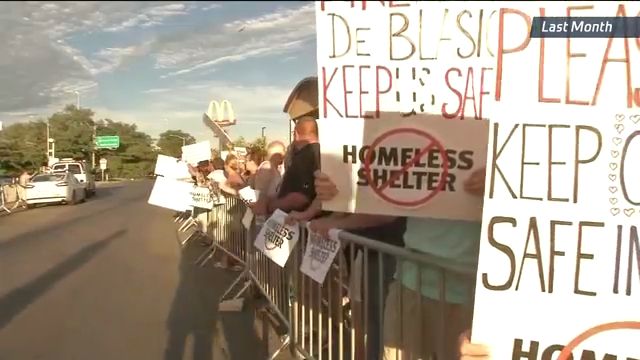 The Department of Homeless Services says negotiations to convert a Queens hotel  into a homeless shelter are ongoing. This comes after the Holiday Inn Express in Maspeth tweeted last night saying it’s confirming “the hotel will not be converting to a shelter as suggested.” The 110-bed shelter was expected to open October 1st, but the proposal is facing strong opposition from many residents who are concerned it would bring crime to their neighborhood.

Last week, Queens Council Member Elizabeth Crowley filed a lawsuit against the City, saying its plan to convert the hotel is illegal. Crowley says New York State law requires that adult families who become homeless be placed in shelter facilities that have kitchens. The Holiday Inn Express rooms, she says, do not. Crowley also argues the hotel is located within close proximity to three existing shelters. The City meanwhile says there is a need for the facility in the area and it is following all requirements.

Similar debates are happening elsewhere in the City. In Bedford-Stuyvesant last week, residents voiced their concerns about a proposed drop-in center for the homeless during a town hall meeting. The center would be located on Bedford Avenue and Halsey Street – just three blocks away from the already existing Bedford Armory Shelter.  The building would hold 50 beds. In response, one Bedford-Stuyvesant resident said “Communities of political power don’t get these kinds of shelters placed in their area.” All of this comes as homelessness hits near record levels. An estimated 59,200 people are expected to sleep in a City shelter tonight.

What do you say? What is your reaction to the growing number of New Yorkers living without homes? Do you approve of the City’s push to create more shelters? Would you welcome a shelter in your neighborhood? If you live in one of the communities where these shelters are proposed, do you support or oppose these plans?

Thanks for sharing your thoughts with us tonight. Personally, I am torn as to what I think about the Maspeth shelter. While I can understand the community’s concerns, we are in the midst of a very serious homeless crisis in the City. We do need more facilities to house those living without homes and if not Maspeth, where?

Sadly, I don’t really believe that any neighborhood would welcome a shelter with open arms. However, this is fact of life in our City: we need shelters and we need more of them.

Your thoughts posted below.

T Minus 2 years before DeBlasio is gone

I would like to know if many of the homeless are actually NYC residents, or are they from NJ and Connecticut seeking NYC shelter and benefits?

As far as I know, NJ and CT do not have a law that says shelters must be provided to homeless, or am I mistaken?

This is too much. They are trying to open a "drop in" center in Ozone Park also that the community is fighting. Mayor DiBlasio has to stop trying to put a band-aide on an open wound. The only people benefiting from all these shelters are the "non-profits" that are getting paid millions of our taxpayers dollars. When will the real issues of affordable rents be addressed?

Three loud and hearty cheers for the middle class, hard-working, tax-paying, home-owning middle class New Yorkers in Maspeth!  DeBlasio and his predecessor, Bloomberg, saw the middle class as patsies to use and abuse and squeeze every last drop of blood from.  This preposterous buffoon who poses as "Progressive" had better come to grips that we middle class citizens of New York City are the ones who do the work and pay the taxes - income, property and every other kind of tax that is imposed on New Yorkers.  You can't just come and stick a bunch of derelicts in our midst and walk away.  Put them in Park Slope or Williamsburg and see how that goes down.


as a formerly homeless person these people are  perfect example of those with the NIMBY effect.  They will always call the police to harass you, but then will fight against helping us Merritt in Flatiron

It's not a homeless problem. It's a brainless problem. De Blasio needs a consultant to tie his shoes. Solving homelessness is beyond his capabilities.

I live next door to a homeless shelter in Hell’s kitchen for many years.

There are at least 3 nights a week that the police, fire department or ambulances are called to this block.

There was a stabbing a couple of months ago in the shelter and the perpetrator ran into a restaurant across the street.

The block was closed and press were everywhere.

There has to be homeless shelters but no one wants them next door.

if i have to live next to one then other people must as well.

Maspeth get over yourself!! its your turn!!

I give DeBlasio a F-.  He wants to have it all ways.  He's in bed with developers and also wants to look like a hero when it comes to the homeless.  Turn one of those sky-high, needle-thin EMPTY monstrosities into a homeless shelter.

The problem isn't the homeless, the problem is the hotel shelters themselves having a bad track record of violence, infestations and murder. They are dumping grounds. If the city provided safer shelters with on-site security and started building affordable housing  instead of million dollar condos,  we wouldn't be having this issue. The 104 precinct is 3 miles away from this holiday inn shelter site. Maspeth would have 2 shelters within 15 blocks and no precinct.
Tara, Queens

It is totally unfair that residents assume that homelessness will bring crime ect. These are New Yorkers! How can resident not allow a shelter for people to open? And why wont the city grow some courage and ignore these people! Its unfair and discriminatory! What should be done with them? keep them in the street cause YOU dont want a shelter near you. UNFAIR simply! shame on the african american community to rally against the homeless cause they dont want a shelter, these are OUR people! New Yorkers need to get off there high horse and have some compassion. If a shelter can be built the city should do it! we all need housing! Theres deep discrimination against those that have not. They would rather our children be exposed to homeless people sleeping on the street, where should they shower, and use the bathroom. Its Unfair! Lawrence Canarsie

As a middle class  city worker & I feel like I'm one step away from the street! Homelessness is a huge problem in the city & it is because Bloomberg set programs in place to make this city affordable only for the rich! Mayor DeBlasio  needs to stand on the premise of his campaign & recognize that the only way to get a handle on this situation is by making housing affordable to fit the salaries of the average resident. There is a "particular race" who control the real estate market, they have been knocking on doors & buying all the properties in our neighborhood. Then comes gentrification & we are pushed out !HOMELESS!  Why is city hall allowing this! There's your real answer.

Our politicians don't have the capacity to solve Homelessness. We need  a new political system.

The mayor and his administration are doing a great job to try to end homelessness.

Homelessness can come at any given time to anyone, and there should be somewhere for people to go for shelter rather than sleeping outside.

A lot of homeless people cannot maintain an apartment for several reasons such as their mental illness and drug addiction.  These same people are also inappropriate for supported housing programs. Some of them have been like this most of their lives with no family or support. Hence being homeless is their reality. So keeping them sheltered is the most humane thing to do and it is only right. More policing and monitoring is one way of ensuring that people in the shelters are behaving appropriately.   Equality for all regardless of race, color, religion or socioeconomic background.

The current administration is a lazy one. When a community does not fight to block homeless shelters the city will continue to convert buildings in same areas leading to an over saturation of folks needing support services.

Years ago we had boarding houses and the SRO style hotels that single people would flock to . Now that these no longer exist these people have nowhere to go for stable housing.

My advice is to keep fighting the city take them to task let's finally work on a solution that will work for all.