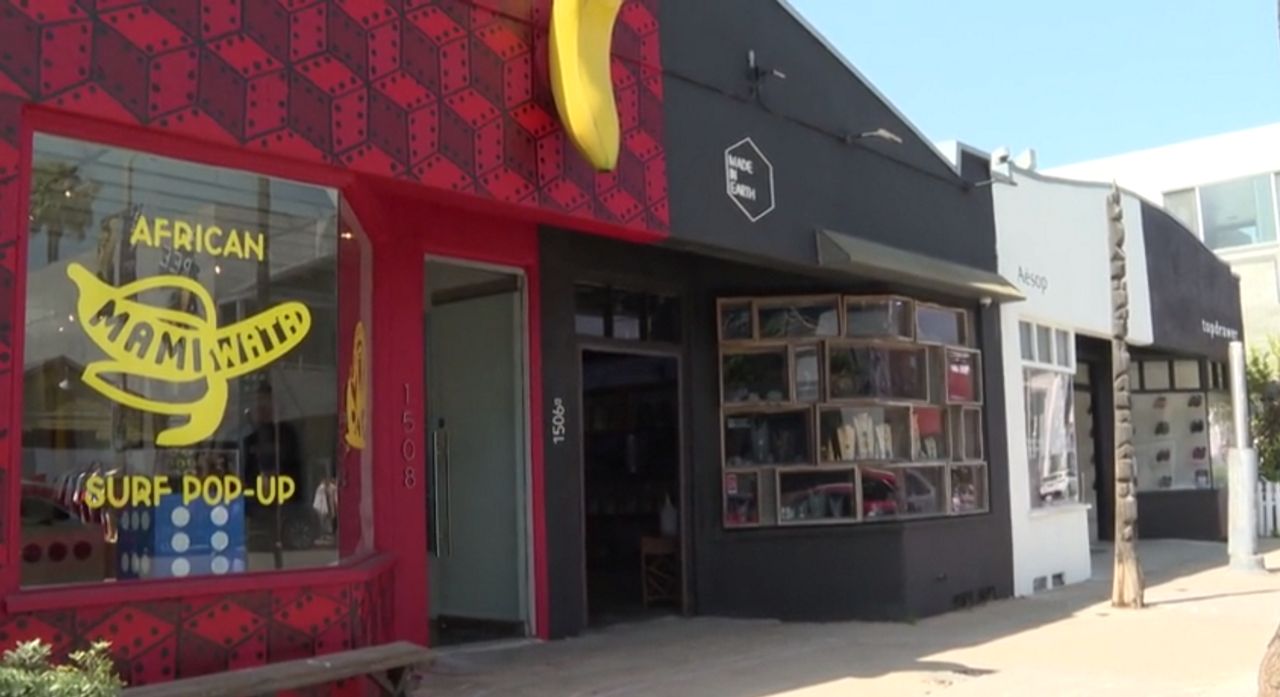 LOS ANGELES — Surf shops and Southern California go together like sand and beaches. But there’s a new surf shop like no other, and it’s in Venice Beach.

Mami Wata is the first African surf shop in the country. Selema Masekela is a surfer and has stepped into a wetsuit many times.

“I was thinking about it the other day. Thousands and thousands of times,” Masekela said.

But Masekela has done something for the first time. He’s opened a surf shop in Southern California, the country’s first African surf shop.

After catching a few waves at one of his local surf spots he smiled proudly and said, “To be able to have Africa enter the chat, so to speak, in what surf culture looks like and expand the landscape of what it looks like, that really was the motivation for the store.”

The store is called Mami Wata, and it’s on Abbot Kinney Boulevard in Venice Beach. It’s named after an African water spirit.

From the clothes to the surfboards, the products in the store are made in Africa. Whenever possible, Mami Wata products are made with local materials such as African cotton. According to Mami Wata, only 8% of the world’s cotton is African cotton.

“This store and our clothing is an opportunity to have a larger, modern day conversation about Africa as a continent, and not a country. And one that plays in the ocean with the same amount of passion as we have here in Southern California,” Masekela said.

A conversation that continues in San Clemente at the Surfing Heritage and Culture Center. An exhibit Masekela and Mami Wata helped put together. A collection that the center’s Jake Howard said will be up through the end of May.

“The stories, the art, culture, everything really stood out as something very special and very unique that we really haven’t seen in surfing — ever," Howard said.

Masekela said both the exhibit and the store are opportunities to learn. He was looking at several shirts on the racks in the bright store and said, “It is mind-boggling that people are shocked that people surf in Africa.”

He said he loves that the bright red facade and the banana on the outside of the store sort of draw people in. Masekela explained the banana above the front door is a sign of prosperity.

“Every time I see people walk by, watch them stop. And have to engage like, ‘What is that? I want to know more.’ And it’s rad.”

He said when people see the items with unique things such as dice with six all around them, “The design is so unique and when they learn where it comes from, I feel like they get discovery.”

It’s also an opportunity to fulfill a goal that started when Masekela was fired from a surf shop in Southern California when he was a teen. He thought he was let go because the store was slow, but Masekela said the manager called him a few months later and explained.

“We were forced to let you go because the owner said that your being Black didn’t fit the definition of a surf shop,” he recalled.

That crushing experience lit a fire in Masekela and took him on a path to make his way into the surf and snowboarding industry, creating his brand Alphanumeric, becoming an action sports host, and so many more accolades, to eventually opening Mami Wata in U.S.

“I feel immensely proud to be able to be in this moment where you walk into this store. You’re being presented with a perspective of surf culture that looks like me,” Masekela said as he pointed to himself.

Msasekela said he hopes the store will inspire others to share their surf cultures too. To learn more about the store or see their products, visit the Mami Wata website.