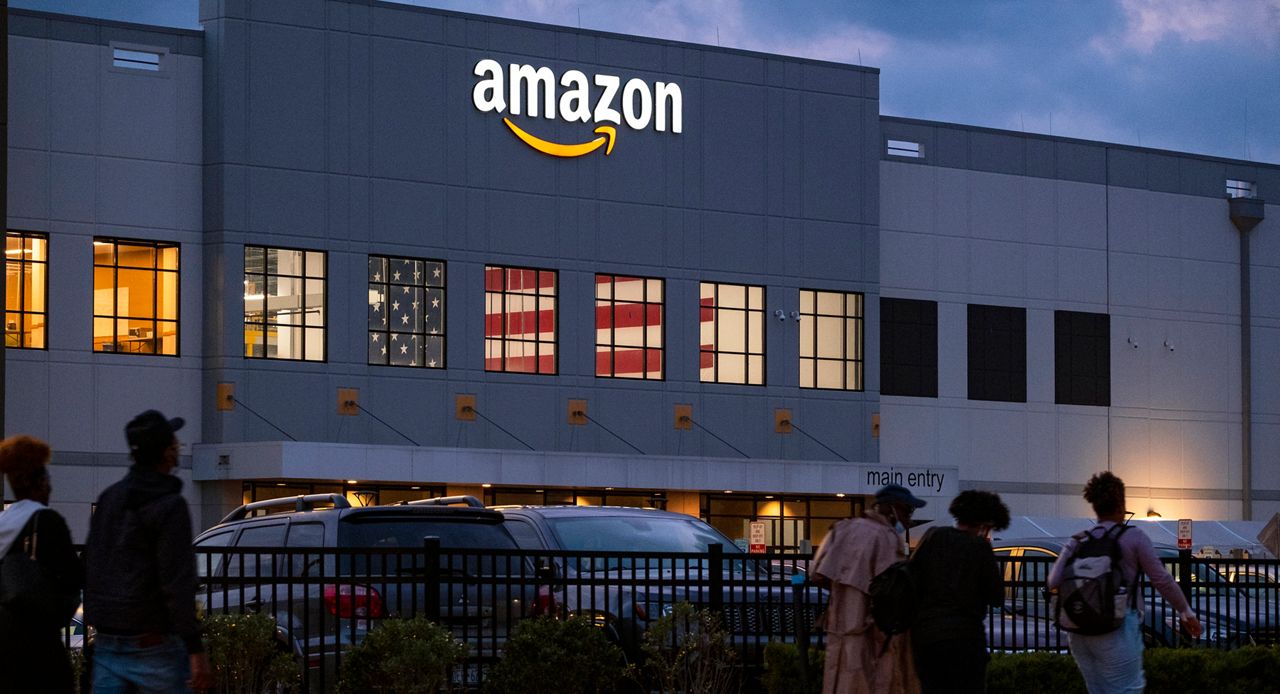 Dueling campaigns on Staten Island — a fight over unionizing Amazon

These days, Amazon worker Connor Spence is bringing his own materials to work.

“This is just a new piece of literature that some of the workers were asking for, information on whether or not Amazon is going to know how they vote in the election,” said Spence, holding a freshly printed stack of paper.

Amazon is legally barred from knowing how workers vote in the election.

Spence’s Staten Island apartment has become the de facto headquarters for the Amazon Labor Union — which is a group of current and former employees of an Amazon facility on Staten Island that is hoping to unionize thousands of workers.

These workers will vote later this month on whether they want the union. It’s the second warehouse-wide election for Amazon in the country.

Spence is one of the union’s leaders. NY1 tagged along on his commute to work, shortly before 7 a.m.

“We try to set up inside the break rooms and hand out literature and try to talk to people on their breaks,” Spence said.

NY1 has exclusively obtained video from inside the Staten Island facility, and it is clear this group of workers is up against one of America’s biggest corporations. At every turn, the company is trying to convince workers to vote no later this month.

Meanwhile, the Amazon Labor Union has a small table in the break room.

They are limited on where they can try to make their case to workers. Even when Spence puts a flier for the union up on the wall outside of that room, an Amazon representative takes it down.

They do as much as they can inside, trying to convince workers the union will be their advocate and voice.

“The universal thing everybody seems to resonate with is the pay. Because it’s expensive to live in New York and nobody thinks we’re compensated fairly for the value we create when you look at how profitable Amazon is and how profitable Jeff Bezos is,” Spence said.

On the outside, with less than two weeks to go before workers start voting, these organizers are hitting the phones, calling employees one by one, hoping they will vote yes.

Amazon’s case for workers to vote 'no'

Staten Island Amazon workers will head to the “polls,” so to speak, on March 25.

They will have to choose whether or not they want to be represented by the Amazon Labor Union.

For months, Amazon has been trying to — not so subtly — tell workers that unionization is the wrong choice.

Amazon has put up posters, held meetings with employees, and even started a website.

They argue a union is unnecessary, because they would rather address employees’ concerns directly. They tout their pay and benefits, like health care, paid time off or tuition reimbursement.

It is unclear how much Amazon has spent, so far, on its lobbying effort.

For other campaigns, it has paid anti-union consultants hundreds of thousands of dollars.

But it's clear the effort on Staten Island is significant.

For one, workers tell NY1 Amazon is bringing in groups of employees every day for captive audience sessions. NY1 obtained video of one from February.

“We are here to make sure that decision and your vote is an educated one. We’re here to present you with some facts today,” an Amazon representative says in the video.

Exclusive video from inside the warehouse shows Amazon’s message is plastered all over the wall, including banners that almost reach the ceiling.

Televisions in the building rotate through Amazon’s talking points.

And Amazon representatives have blasted text messages to employees, including criticizing the Amazon Labor Union for going door to door.

The signs and fliers direct employees to a website where Amazon lays out its case, claiming the labor union “wants to speak for” workers while Amazon wants “to speak with” them. “We are not anti-union,” it says. “We are pro-associate.”

An attorney for the Amazon Labor Union says the Amazon campaign is intimidating workers.

“Unfortunately, it’s normal for some employers to engage in an anti-union campaign,” says Seth Goldstein, an Amazon Labor Union attorney. “This is really on steroids, what they are doing.”

We reached out to Amazon about its campaign. No one would speak with us on camera to discuss it.

The company sent NY1 a statement regarding the informational sessions they have with employees:

“If the union vote passes, it will impact everyone at the site, which is why we host regular informational sessions and provide employees the opportunity to ask questions and learn about what this could mean for them and their day-to-day life working at Amazon.”