New York City’s economic recovery index posted another week of positive gains, as the index rose from 88 to 93 for the week ended Feb. 26. This is the highest overall score we have seen on the index since the start of the pandemic. Despite a bit of a slowdown in the home sales market and a slight dip in rental vacancies, COVID-19 hospitalizations continued to decrease, unemployment numbers are far below what they were over the same period in 2019, and restaurant reservations increased.

This morning, President Biden issued an executive order banning Russian oil imports to the U.S., amid surging gas prices nationwide. Like the rest of the country, New Yorkers are feeling pain at the pump, as gas prices jumped to $4.36 per gallon across New York state on Tuesday, almost 20 cents higher than the current national average, according to AAA data. Lawmakers are working to lift New York State gas tax to help provide some relief to consumers—Republican senators Peter Oberacker and Fred Akshar announced a New York Gas Tax Relief act, which would suspend gas tax until September 1, 2022 if passed. New York Democratic Assemblyman Angelo Santabarbara proposed similar legislation that would drop state gas tax for a year. 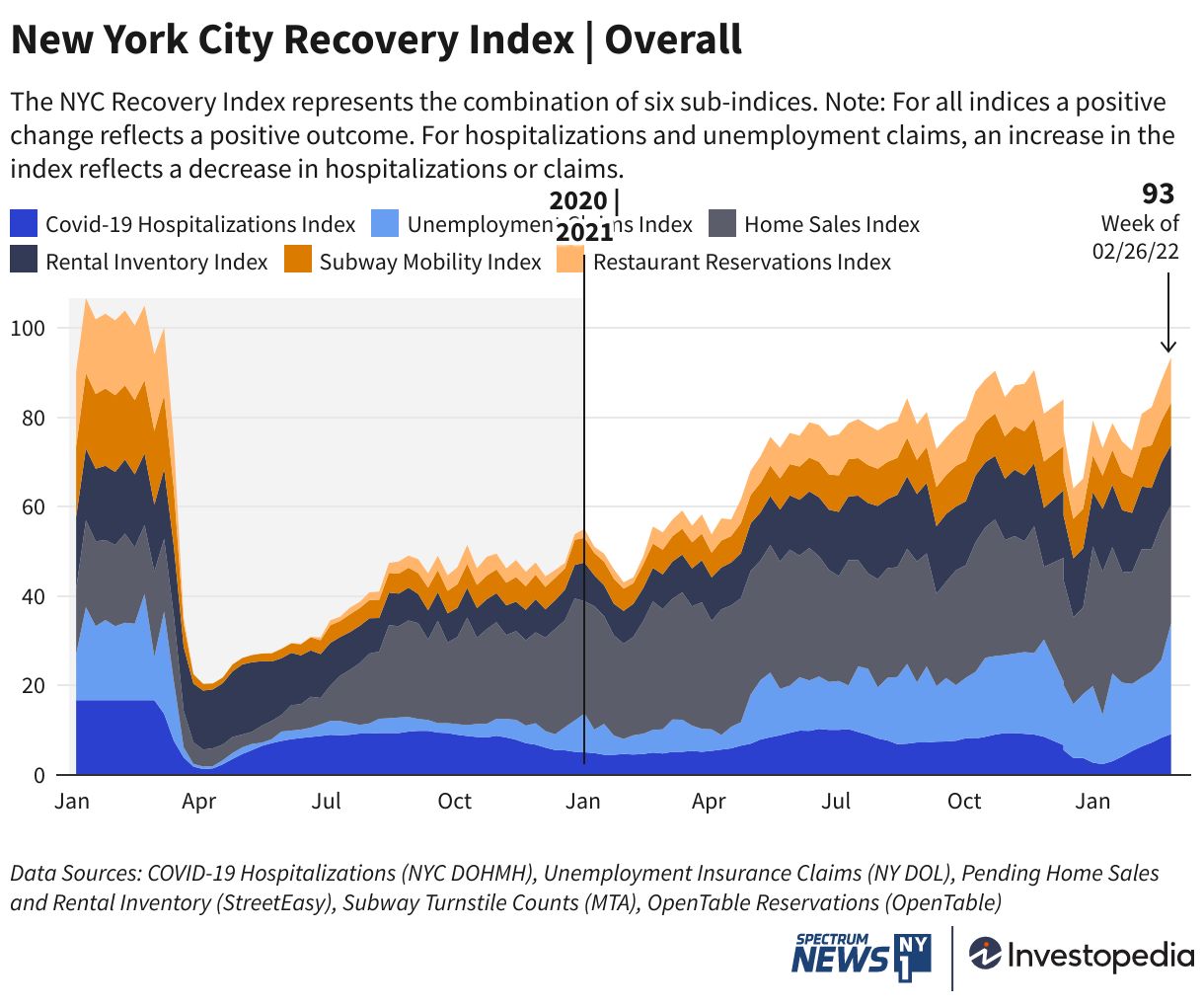 New York City’s recovery stands at a score of 93 out of 100, according to the New York City Recovery Index, a joint project between Investopedia and NY1. Nearly two years into the pandemic, NYC’s economic recovery is now 93% recovered. 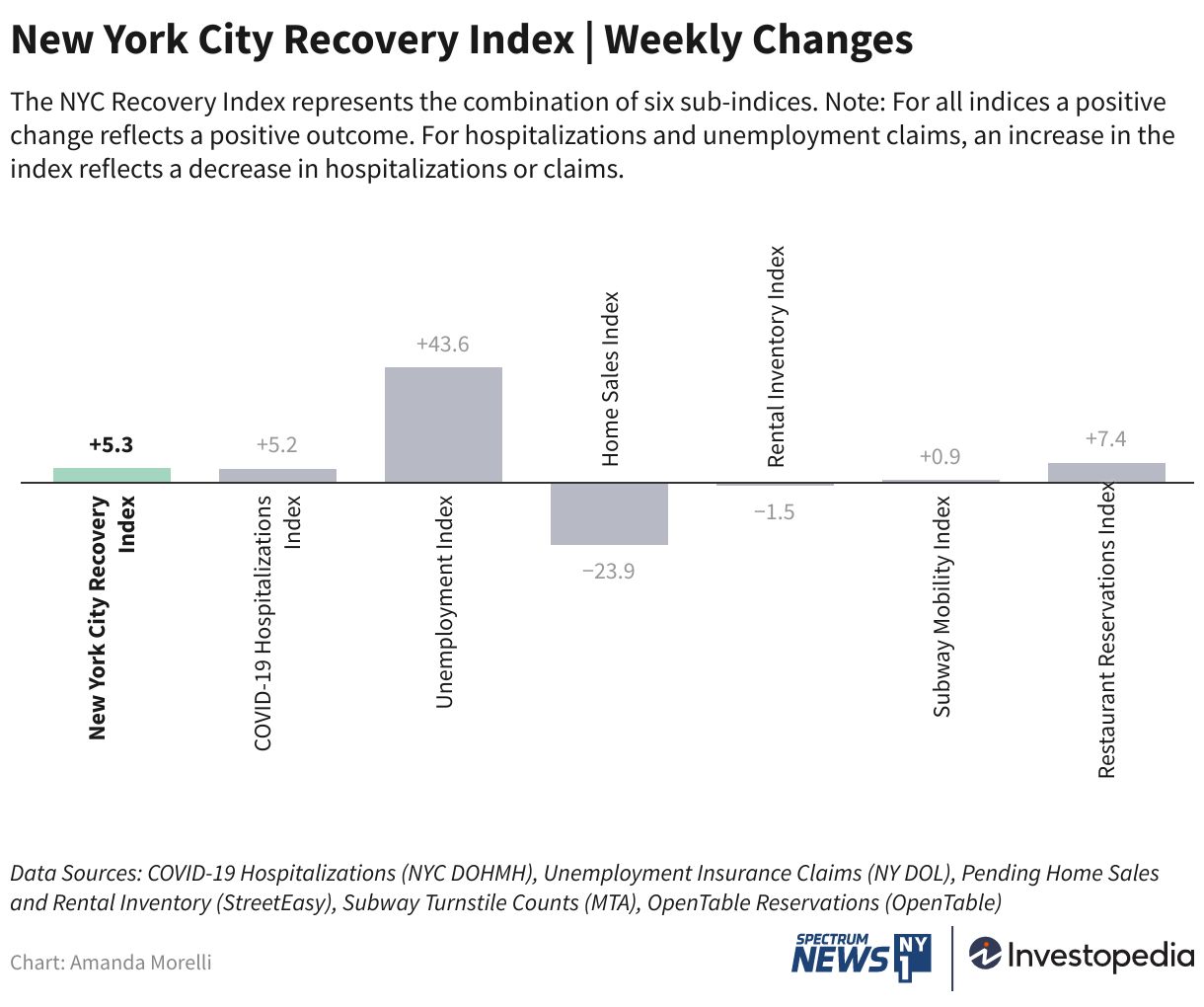 Of the declining COVID-19 cases in the area, the CDC continues to project 100% of new cases in the New York region (along with New Jersey, New York, Puerto Rico, and the U.S. Virgin Islands) are related to omicron. A total of 2,282,831 cases and 39,927 deaths were recorded in New York City as of Feb. 26, while 77.1% of New York State’s population has been fully vaccinated against COVID-19, according to NYC Health data.

Unemployment claims decreased from 5,410 to 5,320, or 90 claims, for the week of Feb. 26. The 2019 rolling average of claims over the same weeks in 2019 increased from 5,660 to 7,883, making the index measure score jump from 104 to a high of 148 for the week of Feb. 26—the best score of the measure since the start of the pandemic. City-wide UI claims are now 32% below 2019 levels, further proving that UI claims are stable and are not experiencing any pandemic-related impacts.

Pending home sales had a notable decline for the week ended Feb. 26, as the home sales index decreased from 183 to 159. Home sales declined week-over-week from 669 to 589 for the week of Feb. 26, compared to an increase in the rolling average over the same period in 2019, which weighed on the index. Despite the dip, home sales are still 59% higher than they were in 2019. By borough, Manhattan is back in the lead with a 69% increase in home sales compared to 2019 levels, with Brooklyn and Queens following behind at 65% and 20%, respectively.

The rental market had a slight dip for the week of Feb. 26, with 12,458 rentals on the market in New York City, which is 336 less than last week. The decline caused the rental measure index to drop from 82 to 80. Though the vacancy rate has not yet fully recovered, it is now more aligned with pre-pandemic levels than it has been over the past two years. The vacancy rate would need to get closer to about 1,000 vacancies or more to be considered fully recovered. Still, New York City experienced a surge in apartment rental prices in 2021. According to Apartment List, rents in New York rose 33 percent between January 2021 and January 2022. That’s almost double the national rate and the highest increase among the 100 largest American cities.

Subway ridership increased slightly as of Feb. 26, as the seven-day trailing average of riders is now down 43% below 2019 levels, from 44% below last week. Though the slight increase this week is not as great as the decline from two weeks ago, it still pushed ridership numbers closer to the benchmark of 40% below pre–pandemic averages. As of Feb. 26, the MTA reported a trailing seven-day average of 2.32 million riders.

Restaurant reservations had another significantly positive week as of Feb. 26, increasing from down 46% below 2019 levels last week, to 39 below this week. Restaurant reservations in New York City have now surpassed the threshold of 40% below pre-Omicron levels. Restaurants could experience seasonal gains as warmer weather comes over the next few months, similar to gains seen in spring and summer of last year, which pushed reservations to a high of 35% below pre-pandemic levels.