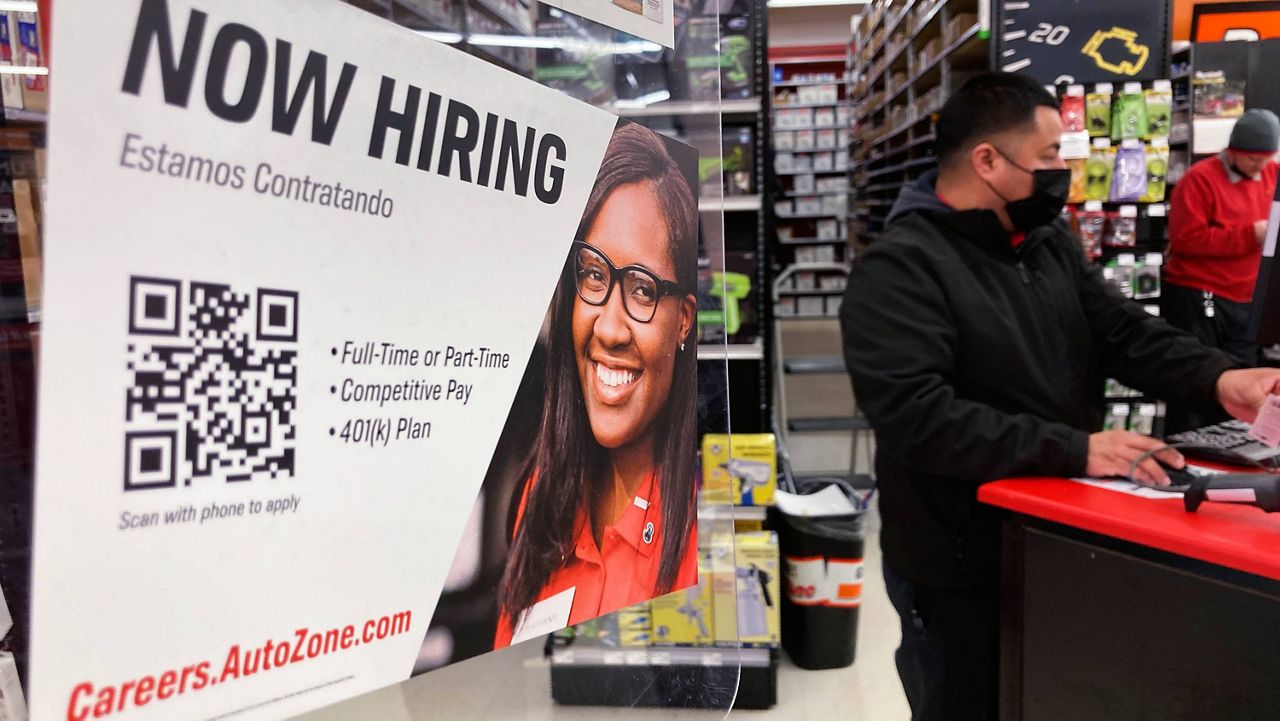 A hiring sign is displayed at a retail store in Buffalo Grove, Ill., on Feb. 10. (AP Photo/Nam Y. Huh)

U.S. employers added a robust 678,000 jobs in February, another gain that underscored the economy's solid health as the omicron wave fades and more Americans venture out to spend at restaurants, shops and hotels despite surging inflation.

The Labor Department's report Friday also showed that the unemployment rate dropped from 4% to 3.8%, extending a sharp drop in joblessness as the economy has rebounded from the pandemic recession.

"Today’s report shows that my plan to build an economy from the bottom up and the middle out is working to get America back to work," President Joe Biden said in a statement. "Since I took office, the economy has created 7.4 million jobs. That’s 7.4 million jobs providing families with dignity and a little more breathing room. We are building a better America."

"In February, the economy created 678,000 jobs, following the greatest year of job growth in American history and the fastest economic growth in almost 40 years," the president continued. "The unemployment rate ticked down to 3.8 percent."

"Our economy is strong," Labor Secretary Marty Walsh said in an interview with Spectrum News on Friday after the release of the numbers, citing the jobs added since Biden has taken office, strong wage growth and job increases across multiple sectors.

Walsh cited the wage growth as part of the reason why more Americans are returning to the labor force.

"I think it's important, I think people are definitely seeing wage growth and wage gain and jobs," Walsh said, but noted he would like to see more wage growth for women.

"We need to get more women back into the workforce," he said, adding: "In this country, we've spent so much time talking about pay equity, women should not be paid differently than men, they should be paid the same, if not more in some cases."

"With this recovery, it's time for us to have true equal pay in this country," Walsh added.

Biden celebrated the fact that February's support suggests that "more people are rejoining the labor force and finding jobs" amid the recovery from the pandemic and the fact that the U.S. saw job gains in multiple industries, including "leisure and hospitality, construction, retail, and manufacturing."

"In fact, last year has been the best year for manufacturing jobs and trucking jobs since 1994," he said. "We are making more and moving goods faster in America."

"This progress is the result of the new economic approach I talked about in the State of the Union — grow the economy from the bottom up and middle out," Biden added. "And it’s a result of our success combatting COVID-19 and moving forward safely."

The latest jobs data follows recent reports that have shown an economy maintaining strength as new COVID infections have plummeted since late January. Consumer spending has risen, spurred by higher wages and savings. Restaurant traffic has regained pre-pandemic levels, hotel reservations are up and far more Americans are flying than at the height of omicron.

Average hourly pay barely rose last month but has increased 5.1% in the past year, a sign that companies feel compelled to raise wages to attract and keep workers. Many employers, in turn, have been raising prices to offset their higher labor costs, a process that has fueled inflation.

"While we must tackle head on the challenge families are facing with rising costs, today’s report underscores that the United States is uniquely well positioned to deal with the challenge that inflation has posed across the world as we recover from the pandemic," Biden said.

Consumer inflation has reached its highest level since 1982, squeezing America's households and businesses, with price spikes especially high for such necessities as food, gasoline and rent. In response, the Federal Reserve is set to raise interest rates several times this year beginning later this month. Those increases will eventually mean higher borrowing rates for consumers and businesses, including for homes, autos and credit cards.

Secretary Walsh said that Biden is not running away from the issue of inflation, but rather is "dealing with it head-on," citing the president's plan he laid out in Tuesday's State of the Union Address.

"You can't deal with if you don't tackle and don't acknowledge it," Walsh said. "The president has done that."

Chair Jerome Powell said this week that he plans to propose that the Fed raise its benchmark short-term rate by a quarter-point when it meets in about two weeks. Powell has acknowledged that high inflation has proved more persistent and has spread more broadly than he and many economists had expected.

The Fed chair cautioned that if inflation failed to ease later this year as he expects, he would consider carrying out half-point increases at future central bank meetings. Larger hikes would raise the risk of weakening the economy or even tipping it into recession.

Powell also warned that Russia's invasion of Ukraine will lead to higher prices for gas as well as for such other commodities as aluminum, wheat and corn, thereby keeping inflation higher than it would otherwise have been. Oil prices, which have been soaring since war began more than a week ago, are critically important to the global economy.

For now, though, despite high inflation, the rapid fading of the omicron variant is likely to accelerate the U.S. economy and job growth. A survey by The Associated Press-NORC Center for Public Affairs Research found that Americans are now much less worried about COVID than they were in December and January. Mask mandates and other restrictions are ending. More companies are returning to pre-pandemic operations, including working in offices.

During the omicron wave, businesses barely wavered in their demand for workers. Job openings at the end of December reached near-record levels, with an average of 1.7 available positions for every unemployed person. Historically, there are usually more people out of work than there are jobs.

With many companies desperate for employees, layoffs have plunged. The number of people receiving unemployment aid fell two weeks ago to its lowest level since 1970.

Americans' concerns about inflation have eroded their optimism about the economy. The Conference Board's measure of consumer confidence slipped in February for a second straight month.

Still, other surveys show that Americans are increasingly satisfied with their own financial situations. And people clearly see that many jobs are available, the Conference Board's survey shows.

Looking to the future, as the country continues to reopen and drop COVID-19 restrictions, Walsh cautioned that every month's labor report might not show gains as large as February's report signaled.

"I think eventually, we're not gonna see 675,000 job gains, there's just not enough people, and not enough jobs in the United States for that," Walsh said, noting that around 90% of the jobs lost in March and April of 2020 have recovered, with the goal being getting the rest of those jobs back.

"Then we were also focused on: What does the future of work look like in the United States?" Walsh said. "How do we make sure that we're creating better pathways into better paying jobs for all Americans? That's quite honestly what we're going to be focusing on now in April and May and June, all the way through 2022."