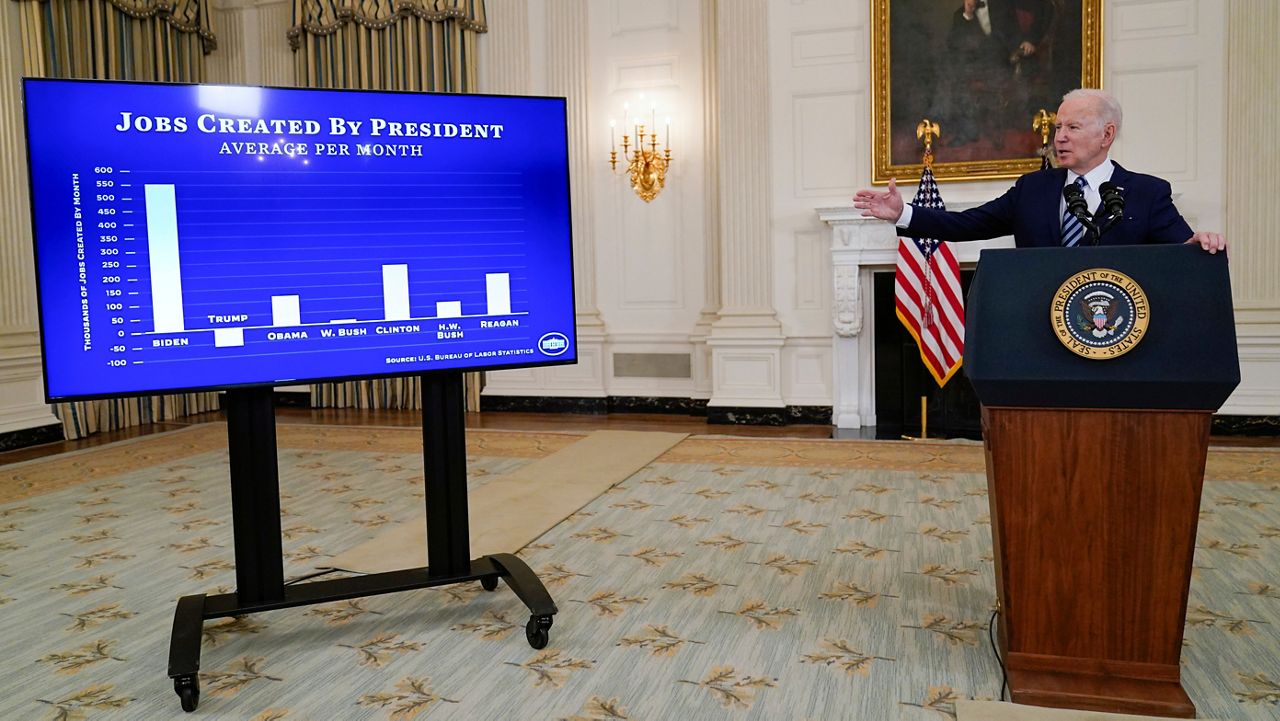 'America is back to work': U.S. economy adds robust 467,000 jobs in Jan. despite omicron surge

U.S. employers added a burst of 467,000 jobs in January despite a wave of omicron inflections that sickened millions of workers, kept many consumers at home and left businesses from restaurants to manufacturers short-staffed.

The Labor Department's report Friday also showed the unemployment rate ticked up from 3.9% to 4%. Estimated job growth for December was also revised much higher, from 199,000 to 510,000. All told, the U.S. added more 700,000 jobs in November and December, based on the revisions in Friday's report.

"We created 467,000 jobs in January. That’s more than 6.6 million jobs since I took office," President Joe Biden wrote on Twitter. "2021 was the greatest year of job creation under any president in history.

2021 was the greatest year of job creation under any president in history.

"Our country has taken everything that COVID has thrown at us and we've come back stronger," Biden said, adding: "America's job machine is going stronger than ever, fueling a strong recovery and opportunity for hard-working women and men across this great country."

"America is back to work," Biden said, saying that the strong numbers from January, as well as the revised figures in November and December reflected in Friday's report, are a sign of the "grit and resilience of the American people and American capitalism."

According to the Bureau of Labor Statistics, the leisure and hospitality sector continued to see growth in January (+151,000), as well as professional and business services (+86,000), retail trade (+61,000) and transportation and warehousing (+54,000).

In an interview with Spectrum News, Labor Secretary Marty Walsh credited a wage increase in the leisure and hospitality sector as a reason for why people are returning to work in those fields.

"I think that a lot of workers are saying, 'Wait a second, if we have the ability to earn more money working in these tough jobs, we're coming back,'" Walsh said. "I think that's one of the things we're seeing."

"We saw professional jobs, and in office jobs, some of the largest gains," he added. "We're seeing more people go back to the workplace."

Walsh also said that while "we didn't see as big of a gain in construction" in January's report, which was expected, "we're going to see those jobs pick up" as projects from President Biden's $1.2 trillion infrastructure bill start to pick up.

Labor force participation was also steady, rising to 62.2% in January, the highest such figure since March 2020; 1.4 million people entered the workforce in January, the largest increase since June 2020.

"This morning's report caps off my first year as president, and over that period, our economy created 6.6 million jobs," the president said. "If you can't remember any year when so many people went to work in this country, there's a reason: It never happened."

Biden touted "historic economic progress," saying the jobs growth comes "alongside the largest drop in unemployment rate in a single year on record, the largest reduction in childhood poverty every recorded in a single year and the strongest economic growth this country has seen in nearly 40 years."

The president credited his administration's efforts, including his Buy American push, as well as key economic legislation passed under his tenure, including the $1.9 trillion American Rescue Plan COVID relief bill, and the $1.2 trillion Bipartisan Infrastructure Bill.

"I know it hasn't been easy, I know that January was a very hard month for many Americans," Biden acknowledged. "I know that after almost two years, the physical and emotional weight of the pandemic has been incredibly difficult to bear for so many people."

"But here's the good news: We have the tools to save lives and to keep businesses open and keep schools open," Biden continued. "Keep workers on the job and sustain this historic economic comeback."

"Vaccination and boosters have proven incredibly effective" to that end, the president said, as well as the at-home COVID-19 tests mailed to millions of Americans nationwide, for free, and the tens of thousands of free testing sites nationwide and other treatments available to tackle the virus.

"And now we're seeing the difference our efforts have made, look at what's happened," Biden said. "Just in the past three weeks ... the COVID crisis has been cut in half, down in half in just three weeks. Still too many cases, still we have to be on alert, but to be clear, this is a dramatic decline."

Biden said that even with the "extraordinary news" from January's report and "historic progress" in the last year, "we've still got a lot of work to do," saying the U.S. needs to address rising consumer prices and praising the competitiveness bill that the House passed on Friday.

"We all know we're in competition with the world," Biden said after listing recent domestic manufacturing announcements from Intel, General Motors, Union Pacific Railroad and Ford. "These announcements are the drumbeat of a jobs resurgence unlike anything we've seen in our history."

"It didn't happen by chance," he said. "It's a result of the economic plan I put into action on day one, when I said it's gonna be 'Buy American.'"

Biden also discussed the need for competition for economic growth and reducing consumer prices, repeating his oft-used phrase that "capitalism without competition isn't capitalism, it's exploitation."

"Average people are getting clobbered" by rising consumer prices, Biden said, adding that his administration is working hard to bring down food and gasoline prices, but more needs to be done, calling for Congress to pass his Build Back Better plan to reduce child care and prescription drug costs.

Biden said the bill is necessary to help American families save money, as well as reduce costs and reduce the deficit. "We can keep coming together and invest in the backbone of America, the working class and the middle class folks. There's no limit to what we can achieve."

"We need to continue to work with with companies and corporations in America to get help see what people need to get to back to work as far as job training," Walsh told Spectrum News when asked what the U.S. needs to do going forward to continue these economic trends, adding that the U.S. also needs to continue to act on reducing consumer prices.

"We need to bring those pressures down," Walsh said. "We need to continue to work to create opportunities for Americans to make more money. And we need to we need to let people know in this country that we are working."

"And by the way, the middle class, when it does well, when the working class does well, everybody does well," Biden added. "Everything is better for the wealthy, the super wealthy and the slightly wealthy. Nobody gets hurt."

The strong hiring gain demonstrates the eagerness of many employers to hire even as the pandemic raged. Businesses appear to have seen the omicron wave as having, at most, a temporary impact on the economy and remain confident about longer-term growth.

At the same time, the magnitude of the job growth points to an economy in which high levels of hiring and spending, combined with supply shortages, are accelerating inflation, wiping out pay raises and intensifying pressure on households. Those factors will likely give the Federal Reserve leeway to raise interest rates, perhaps even faster than it had planned, to cool inflation. The Fed has already indicated that it will begin raising rates in March, and it could do so again at its next meeting in May.

A greater proportion of Americans are also now working or looking for work, the report showed, a trend that makes it easier for companies to find workers. It may suggest that concerns about long-term labor shortages have been overblown, at least in some industries.

The overall outlook for the job market remains bright, with openings near a record high, the pace of layoffs down and the unemployment rate having already reached a healthy level. The nation gained more jobs last year, adjusted for the size of the workforce, than in any year since 1978. The unemployment rate fell by nearly 3 percentage points — from 6.7% to 3.9% — the sharpest yearly decline on records. Much of that improvement represented a rebound from record job losses in 2020 that were driven by the pandemic recession.

Yet the economy’s strong growth and hiring gains were accompanied by the highest inflation in four decades, magnified by brisk consumer spending on furniture, electronics, appliances and other goods and vast infusions of federal aid that has now largely expired.

Snarled supply chains hampered the availability of many goods, especially new and used vehicles, forcing prices up sharply. Prices of food, energy and housing soared, too. High inflation has wiped out many Americans’ pay gains.

Omicron infections are likely slowing the economy in the January-March quarter, particularly compared with the rapid expansion in the final three months of 2021, when it grew at a robust 6.9% annual rate. Some analysts have forecast that growth will weaken to an annual rate as low as 1% in the first three months of this year.

One reason for the slowdown: Americans cut their spending in January as the spread of the coronavirus discouraged some people from eating out, traveling and going to movies and other entertainment venues.

Yet as omicron fades, there are signs that consumers are poised to spend again. Auto sales jumped in January after several months of declines. Carmakers have managed to slowly ramp up production. And Americans’ incomes rose at a solid pace last month, providing fuel for future spending.