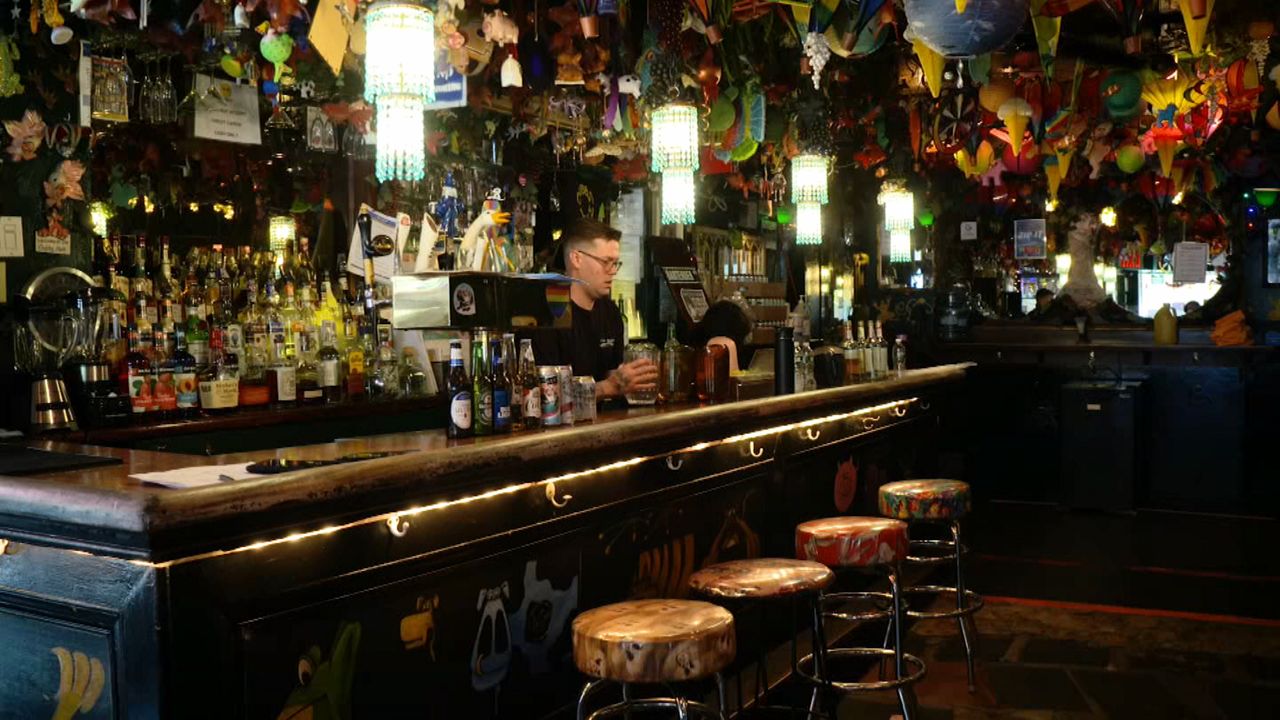 Cubbyhole, a fixture in the West Village for more than 27 years, is one of only lesbian bars left in New York City, according to The Lesbian Bar Project.

Cubbyhole, hit hard by the pandemic, is one of just three lesbian bars left in NYC

NEW YORK — For more than 27 years, Cubbyhole has been a fixture in the West Village, with its eclectic design and rainbow-covered ceilings.

But according to “The Lesbian Bar Project,” there are only three lesbian bars left in New York City, Cubbyhole being one of them.

The bar had to close — twice — during the coronavirus pandemic for months at a time. The other two lesbian bars in the city, Henrietta Hudson and Ginger’s, are also facing hardship. Ginger’s has yet to reopen altogether.

“There are only 21 lesbian bars left in America and we lost some during the pandemic,” said actress and comedian Lea DeLaria said.

DeLaria is the executive producer of “The Lesbian Bar Project,” which was created in order to raise awareness and raise desperately needed funds to help the remaining lesbian bars survive.

Both DeLaria and Cubbyhole owner Lisa Menichino gave their thoughts on why they think there are so few lesbian bars left.

“Well, first of all, women don't make the money that men make. So there's that economic reason,” said DeLaria.

“That's narrowing a little bit, but it's still there, especially, you know, women of color and there's a big gap. And so they tend to have more discretionary income to go out,” Menichino said. “The bar used to be the only place you can go really to meet romantically and to meet socially other lesbians or gay people. And then as technology advanced, you were able to meet people online. So the necessity of the bar sort of diminished a little bit. And then with the sort of assimilation of gay people, where we were able to get married and we were accepted by the broader society, you could come out at work, you can go to a straight bar and be out and you can meet people that way. So I think the need for the bar, for those kinds of reasons of meeting other people, like, it kind of diminished. And unfortunately it had this effect where a lot of lesbian bars disappeared.”

Over the last year, “The Lesbian Bar Project” raised over $117,000 and plans to continue its work.

Menichino says Cubbyhole is open to everyone and always will be, but keeping the “lesbian bar” distinction is important to make sure it is not erased.

“There's a thing when you walk into a gay bar as a gay person, that straight people I don't think understand at all; where you just go, ‘ah,’ because, you know, you're in your safe space,” DeLaria concluded. “If we lose these lesbian bars, where are we going to go for community? Where are we going to go, you know, to be together, to have our family?”