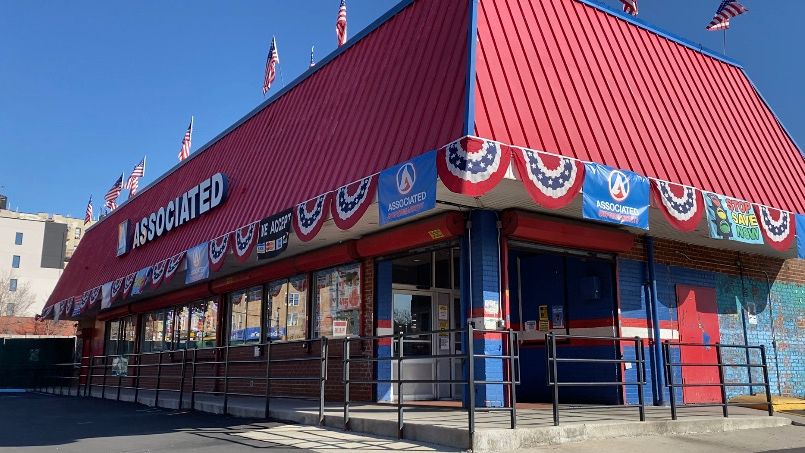 Associated Supermarket on Nostrand Avenue in Crown Heights. Residents fear if it is forced to vacate, the community will become a food desert. Alyssa Paolicelli/NY1.

Brooklynites Rally for Supermarket to Stay, Fear a Food Desert Without It

NEW YORK — Manny Tavares has been the manager of the Associated Supermarket on Nostrand Avenue in Crown Heights since it opened back in 1991.

The Staten Islander has immense pride in serving the Brooklyn community.

"We got a lot of cooks in the neighborhood," he said. "They come and tell me, 'I love the way you have all those spices and this and that, you don't find it nowhere else.'"

Tavares says if a customer doesn't find something they need, he tries to have it on the shelf by the time they return.

And throughout the coronavirus pandemic, he says he and his staff have tried to do everything they can to make their customers, especially seniors, feel safe.

"We bring them to the store if they can't come," Tavares said. "They call in their orders and we bring it to their house free of charge, whatever it is."

But earlier this week, Tavares and the rest of the employees at Associated found out the owner of the site would not extend the store's lease beyond the spring. The supermarket has been operating on a month-to-month lease since last summer. A spokesperson for the property owner, Midwood Investment and Development, said the end of May is its preferred timing for the supermarket to vacate the property.

Word about the supermarket being forced to close has been met with backlash from local residents. Alexander says without Associated, she'll have to travel far for groceries.

"We have to walk a long way, down on Church, Flatbush. We like it here. Here is nearer," Alexander said.

Tashema Persad has lived in the neighborhood for 20 years. She says she has a car, so she will be able to drive to find quality and affordable food, but she worries for those who don't.

"It is really upsetting. I have other means to get groceries, but I know that there are many other residents in this neighborhood who don't have other options," Persad said. "So it is upsetting that older individuals won't be able to get food."

Local residents say this is not the first time the site owner has tried to force out the supermarket. The community pushed back years ago and they say they plan to do it again.

A group gathered in the store's parking lot Saturday morning, collecting signatures for a petition and handing out flyers about an upcoming rally.

"If this goes away, it instantly becomes pretty much a food desert," explained Michael Hollingsworth, a member of the Crown Heights Tenant Union. "So we are out here today just trying to spread the word."

A rally in support of keeping the supermarket open is planned for next weekend.

In a statement, a spokesperson for Midwood Investment and Development said, "We've been in close touch with the store's owner, Mr. Espinal, for more than two years about our intention to change the use of this property and willingness to work with him through that process. We remain open to working with him toward a mutually agreeable path forward and look forward to continuing those discussions."