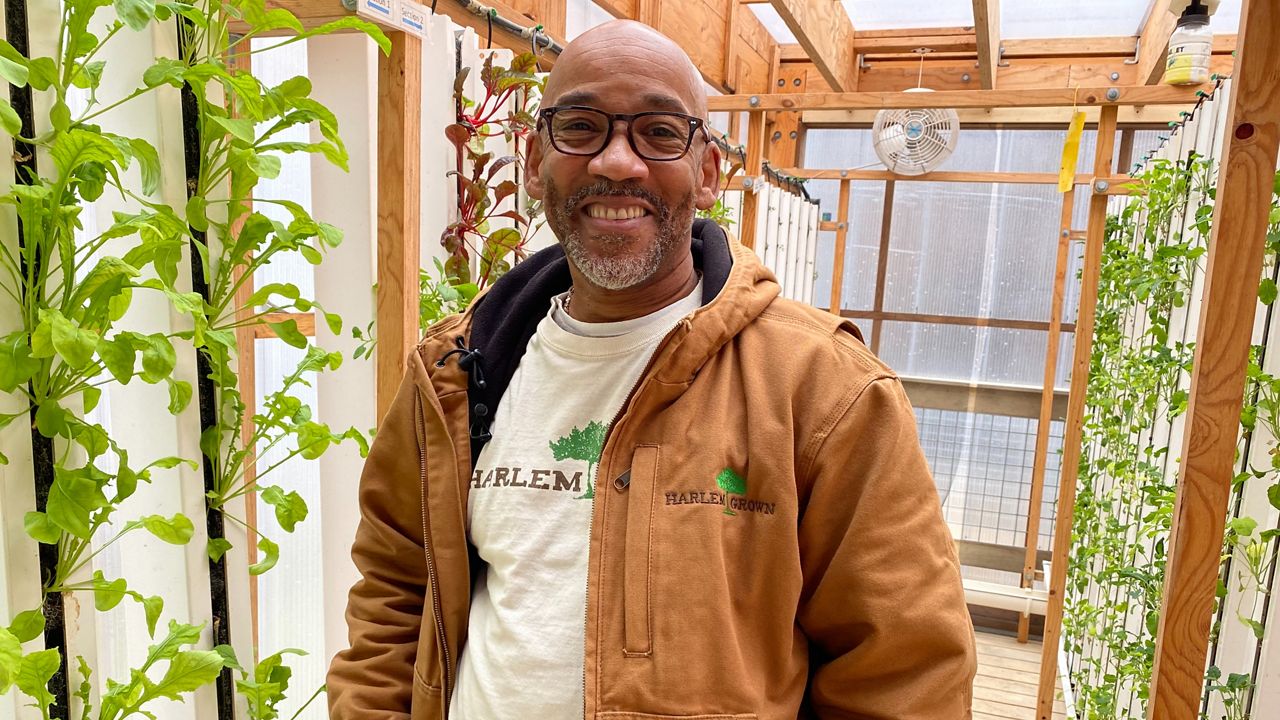 Tony Hillery, a food activist and the founder of Harlem Grown, use organic gardening to transform the lives of young people in Harlem. (Spectrum News NY1/Stephanie Simon)

NEW YORK — As I sample the delicious micro green growing up and down the walls of Harlem Grown's newest indoor garden I ask founder Tony Hillery, "do the kids sneak snacks?"

"Oh they don’t have to sneak. As we package it, we lose about 10% to their stomach," Hillery said with pride.

That is a lot of healthy snacking for the kids of Harlem Grown, which grows and distributes 6,000 pounds of free produce a year from 12 urban gardens here in Harlem.

"We set up farm stands, and we have farm fresh eggs everyday as well. We collect community compost and make our own fertilizer," said Hillery, who also teaches nutrition, agriculture, sustainability, life skills and more in schools and at the gardens.

Hillery is not a nutritionist, did not grow up on a farm, and does not have a background in political activist. A businessman who owned a successful fleet of limousines, Hillery took an interesting and unexpected journey to get here.

"In the short form, selfishly I had time and was looking to fill that time so I wandered into a school to volunteer,” said Hillery. “There just happened to be an empty space across the street from school. We cleaned it out. And little Naveah Seeley tugged on my sleeve and said 'why don't we plant something?'"

So a decade ago, frustrated by the lack of affordable healthy food options in Harlem, Hillery founded Harlem Grown with his first garden and school program on 134th Street.

"I was 52 pounds heavier than I am now," said Hillery walking through one of the gardens. "So I waddled into that school talking about healthy foods. Healthy nutrition. The hypocrisy in me is disgusting. But as I am going on this journey with these children, I subscribe and go vegan. I’m 62. Off medication. I never felt better in my life. So you are what you eat but it’s not as simple as that. Its access and affordability."

Mayor Adams, a proponent of the vegan diet, tapped Hillery to be on his transition team along with Karen Washington, a longtime advocate for urban agriculture and food justice who inspired Hillery and countless others.

"Especially for Black folks in agriculture, all we want is the ability to grow food, to have access to land, to have the same opportunity to have capital and to have the same things white people have. You know 98% of farmland in America is owned by white farmers, males," said Washington.

Harlem Grown's 151st Street garden is named for Washington. The newest location at a 127th Street location features the only solar powered, two-story vertical hydroponic garden in the country.

"That rainwater is pumped up and dripped. And we only water the root of the plant so we use 98% less water than we do outside," said Hillery.

Harlem Grown has reached 30,000 children over its decade of existence, but it’s only in six of 39 Harlem elementary schools. With the high concentration of homeless and domestic violence shelters, Hillery says he used to break down thinking about kids' hardships.

"I did in the beginning. I cried myself to sleep," said Hillary.

Now he says he focuses on what he can do. And he is still in touch with a thriving Nevaeh.

The kids are also fueled, by his faith in them and those delicious fruits and vegetables they grown.