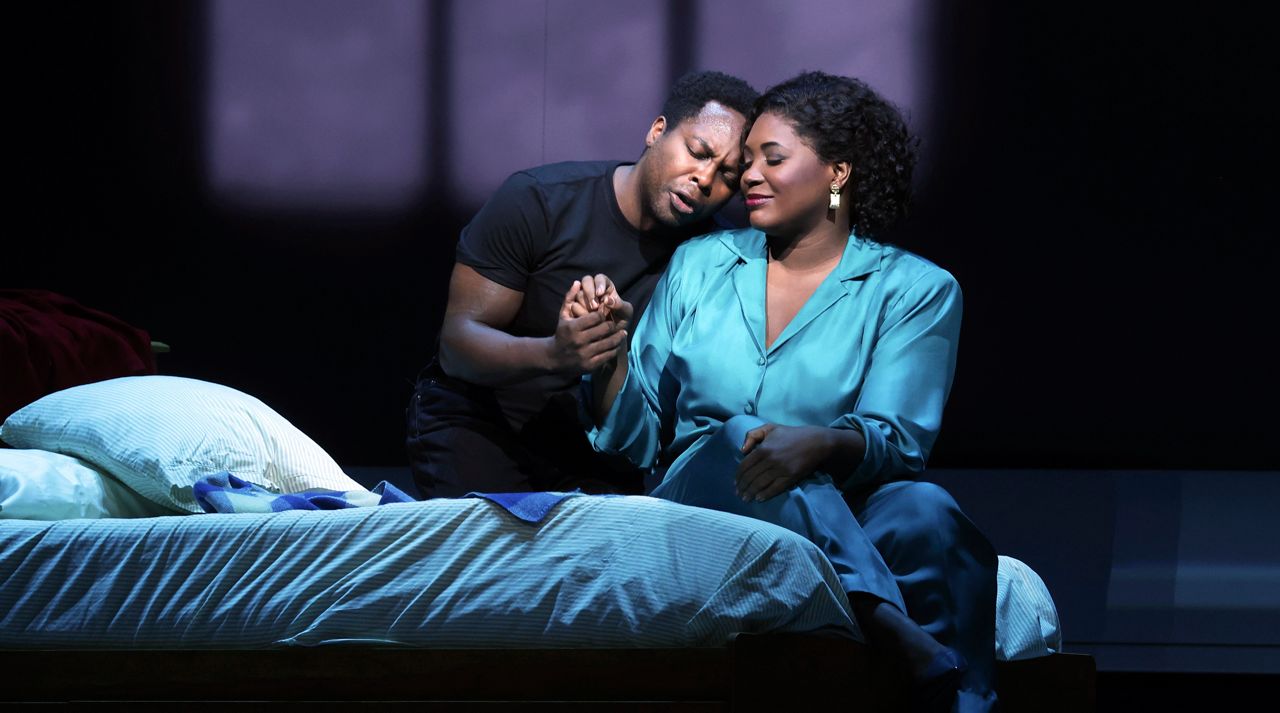 Will Liverman, left, and Angel Blue perform during a rehearsal of "Fire Shut Up in My Bones" at the Metropolitan Opera house, Friday, Sept. 24, 2021, in New York. (AP Photo/Jason DeCrow)

NEW YORK — Before the first note, Monday was a night filled with emotion and excitement as fans returned to the Metropolitan Opera after more than 18 months away.

But it was also historic because the opera performed was the first by an African American at the Met Opera in its 138-year history. “Fire Shut Up In My Bones” was composed by jazz musician Terence Blanchard.


“It means the world to me,” Blanchard said. “But it’s not just for me; it’s for all of the other people who wish they could have been here.”

As far as the genre, he says it’s opera infused with jazz.

“What I’m trying to do is, take the DNA of American jazz and bring it into this form and develop the opera based on that,” Blanchard said.

Many came to opening night to celebrate the milestone and the return of live performances to New York City.

“It’s historic. First of all, I grew up with Terence. I went to school with him at the New Orleans Center for Creative Arts. We’re actually distant relatives,” actor Wendell Pierce said.

“This is of course the first time a Black composer is premiering an opera here at the Metropolitan,” actor Laverne Cox said. “A few of my friends are singing here tonight and I’m just so excited to be here. Opening night at The Met is just really, really special.”

“This is the epitome of New York City. I mean, you’re looking right at it. This is just the greatest place to come in New York City,” actor Erich Bergen said. “I come here in the afternoon just to kind of walk around.”

For those walking around on opening night, it was a feeling that the future of the performing arts was being redefined.

“I think tonight is historic,” ticket-holder Angela Davis said. “I think with everything that’s going on in our country right now, this event, this presentation really sets a precedent about where we’re going.”

“The Met is always at the forefront of cultural development, especially in opera, but more broadly, too,” said opera singer and concert-goer Candice Hoyes. “So it’s just a kind of groundbreaking night in music.”

Unlike other opening nights, there was no official red carpet. Instead, the whole plaza was like a red carpet. Everyone stopped to take their own pictures.

Another first for The Met: the full opera was simulcast at Marcus Garvey Park in Harlem along with its usual simulcast in Times Square.

And it’s just the opening night: the Met has a robust schedule for this season and hopes to keep audiences entertained throughout.