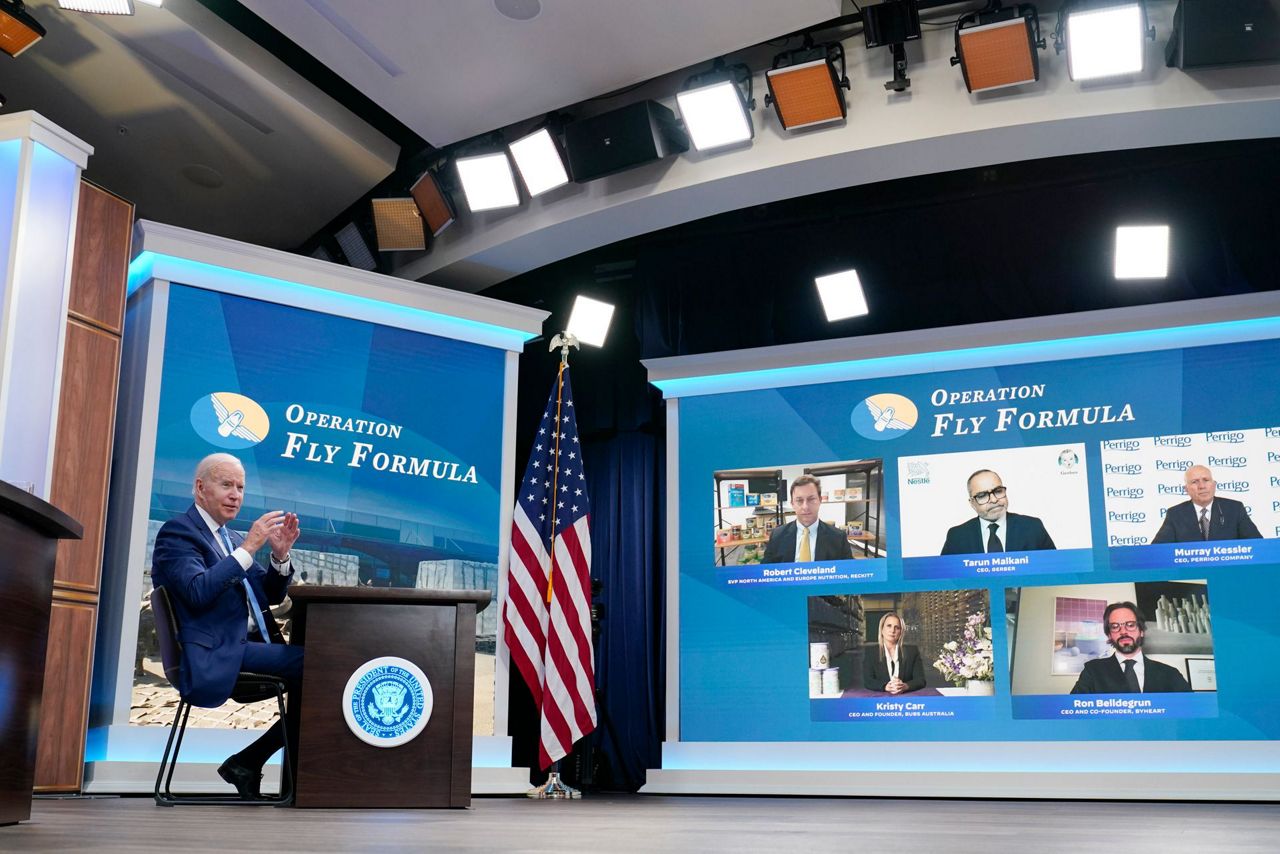 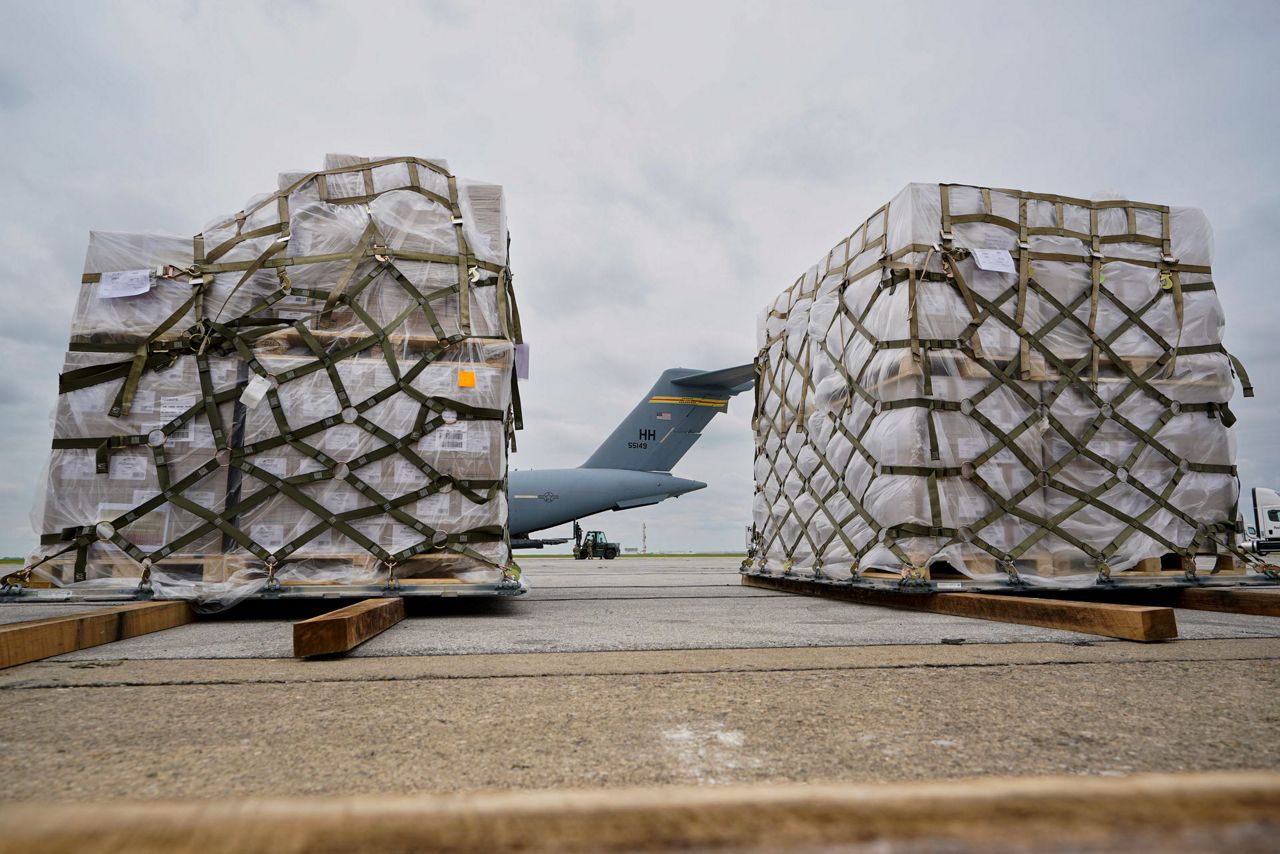 2 of 3
Pallets of baby formula wait to be transferred to a truck after arriving on an Air Force C-17 at the Indianapolis International Airport in Indianapolis, Sunday, May 22, 2022. The 132 pallets of Nestlé Health Science Alfamino Infant and Alfamino Junior formula arrived from Ramstein Air Base in Germany. (AP Photo/Michael Conroy) 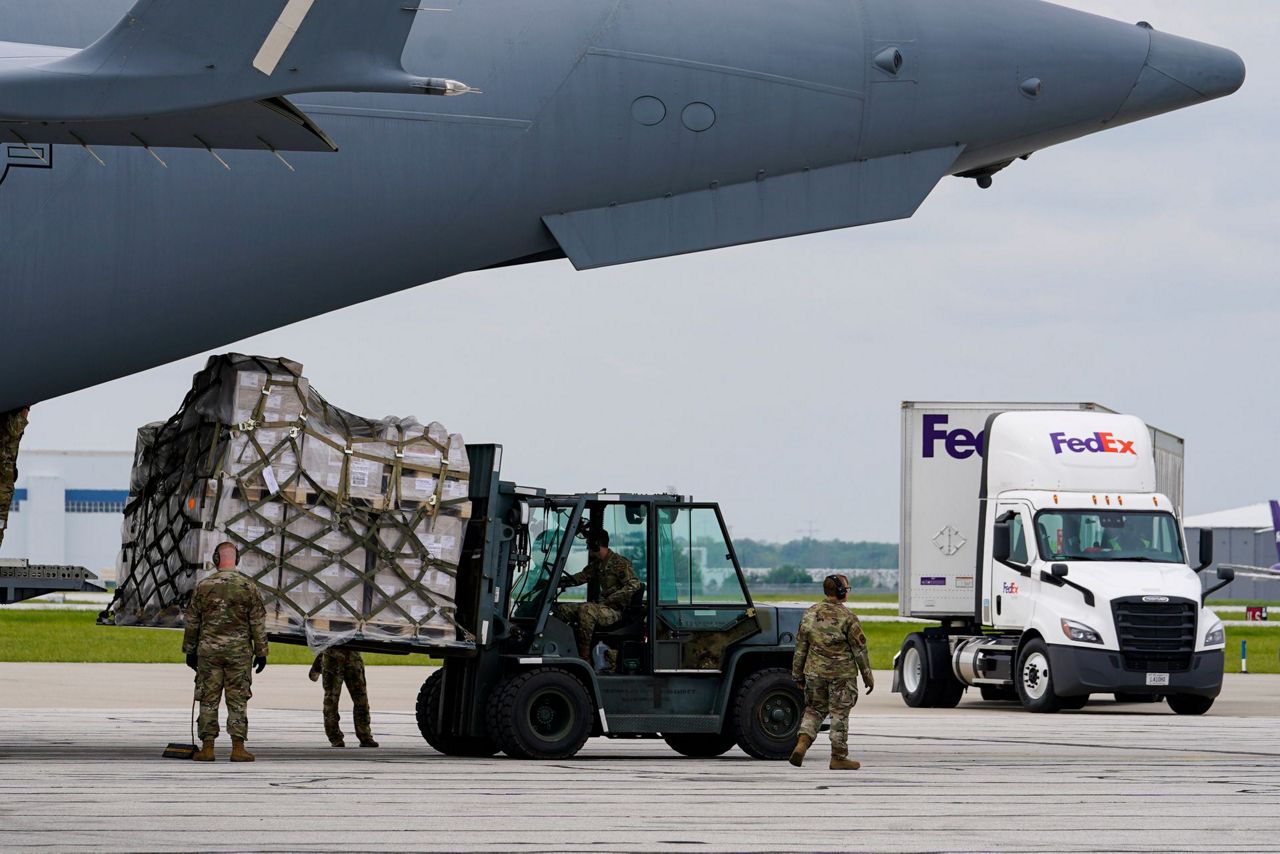 3 of 3
Pallets of baby formula are transfered to a truck after arriving on an Air Force C-17 at the Indianapolis International Airport in Indianapolis, Sunday, May 22, 2022. The 132 pallets of Nestlé Health Science Alfamino Infant and Alfamino Junior formula arrived from Ramstein Air Base in Germany. (AP Photo/Michael Conroy)

WASHINGTON (AP) — Abbott Nutrition has restarted production at the Michigan baby formula factory that has been closed for months due to contamination, the company said Saturday, taking a step toward easing a nationwide supply shortage expected to persist into the summer.

The February shutdown of the largest formula factory in the country led to the supply problems that have forced some parents to seek formula from food banks, friends and doctor's offices.

Abbott said it initially will prioritize production of its EleCare specialty formulas for infants with severe food allergies and digestive problems who have few other options for nutrition. The company said it will take about three weeks before new formula from the plant begins getting to consumers.

“We will ramp production as quickly as we can while meeting all requirements,” Abbott said in a statement.

The plant’s reopening is one of several federal actions that are expected to improve supplies in the weeks ahead. President Joe Biden’s administration has eased import rules for foreign manufacturers, airlifted formula from Europe and invoked federal emergency rules to prioritize U.S. production.

Abbott closed the Sturgis, Michigan, factory in February after the Food and Drug Administration began investigating four bacterial infections among infants who consumed powdered formula from the plant. Two of the babies died. The company continues to state that its products have not been directly linked to the infections, which involved different bacterial strains.

FDA inspectors eventually uncovered a host of violations at the plant, including bacterial contamination, a leaky roof and lax safety protocols. The FDA has faced intense scrutiny for taking months to close the plant and then negotiate its reopening. Agency leaders recently told Congress they had to enter a legally binding agreement with Abbott to assure all the problems were fixed.

Abbott’s February recall of several leading brands, including Similac, squeezed supplies that had already been strained by supply chain disruptions and stockpiling during COVID-19 shutdowns.

The shortage has been most dire for children with allergies, digestive problems and metabolic disorders who rely on specialty formulas. The Abbott factory is the only source of many of those products, providing nutrition to about 5,000 U.S. babies, according to federal officials.

Abbott is one of just four companies that produce about 90% of U.S. formula. The company’s recalls and shutdown triggered a cascade of effects: Retailers have limited customer purchasing to conserve supplies and parents have been told to switch brands to whatever formula is in stock.

FDA Commissioner Robert Califf recently told lawmakers it could be about two months before formula supplies return to normal levels. The agency has waived many of its regulatory requirements to accept more formula from the United Kingdom, Australia and other nations.

U.S. manufacturers, including Reckitt and Gerber, have also stepped up production, running plants 24/7 and sourcing more formula from alternate facilities.

The Associated Press Health and Science Department receives support from the Howard Hughes Medical Institute’s Department of Science Education. The AP is solely responsible for all content.