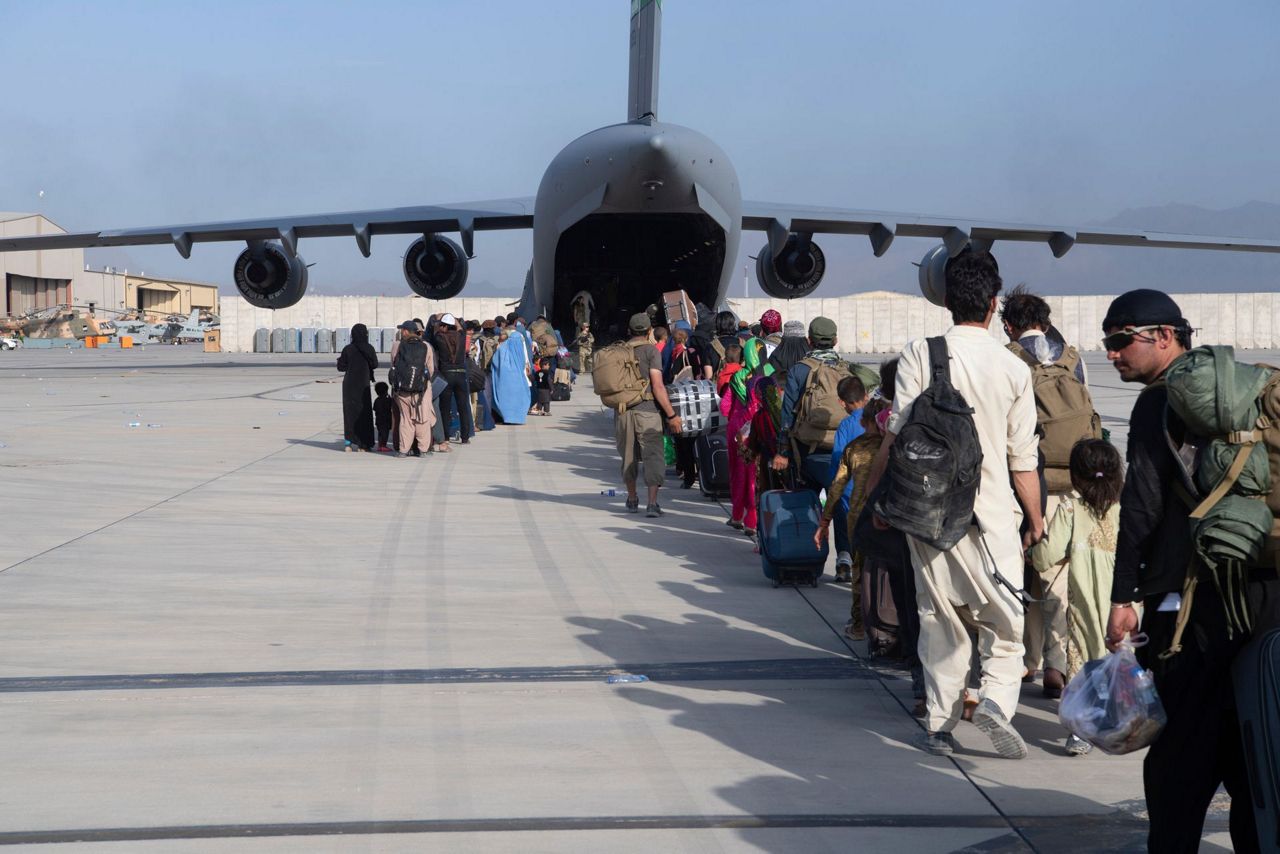 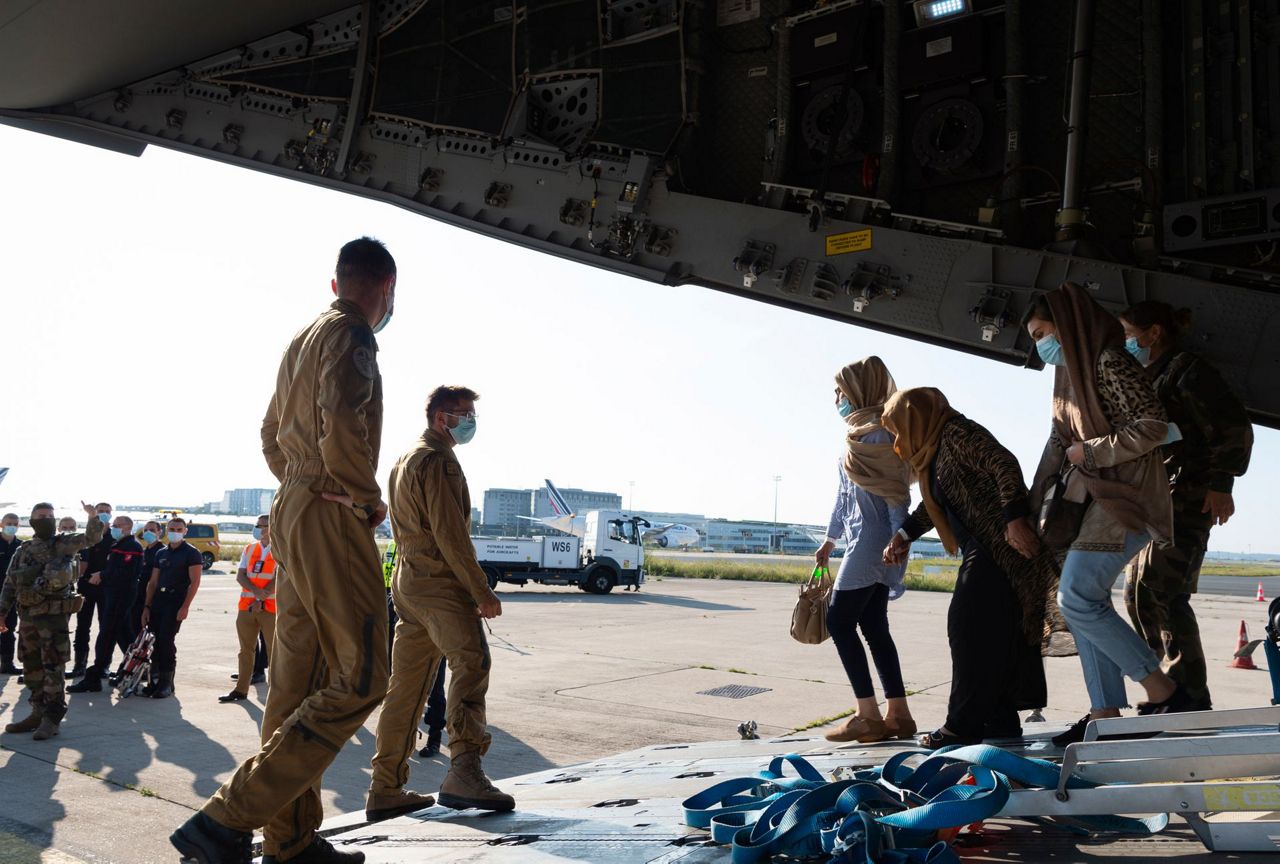 2 of 10
This photo provided by the French Army Thursday, Aug.26, 2021 shows Afghan refugees arriving in a military plane at Roissy airport, north of Paris, Wednesday, Aug.25, 2021. At least 1720 Afghans and a hundred French people have been evacuated by France since the beginning of the operation last week. French President Emmanuel Macron promised France would evacuate Afghans who worked for the country as well as activists and others under threat. (Eric Cadiou/Etat Major des Armees via AP) 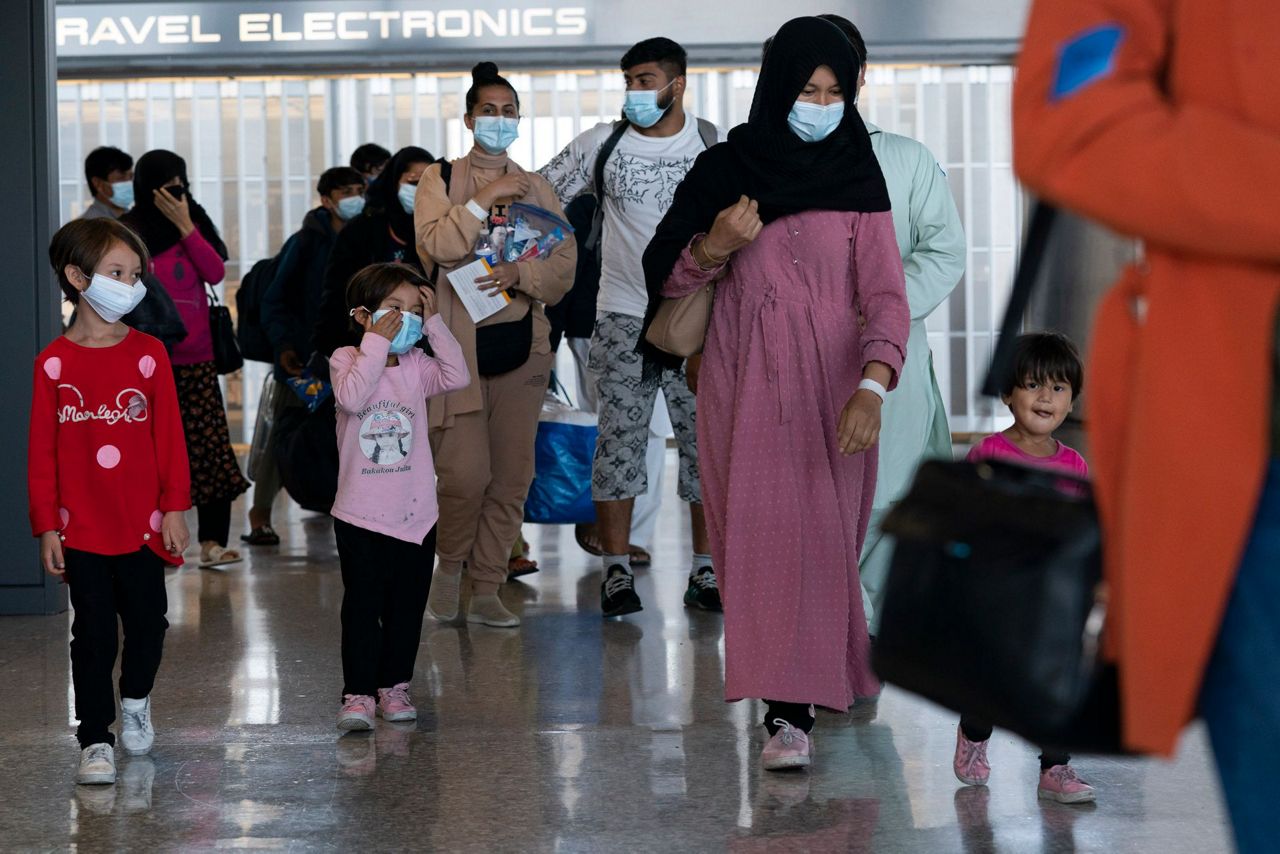 3 of 10
Families evacuated from Kabul, Afghanistan, walk through the terminal before boarding a bus after they arrived at Washington Dulles International Airport, in Chantilly, Va., on Wednesday, Aug. 25, 2021. (AP Photo/Jose Luis Magana) 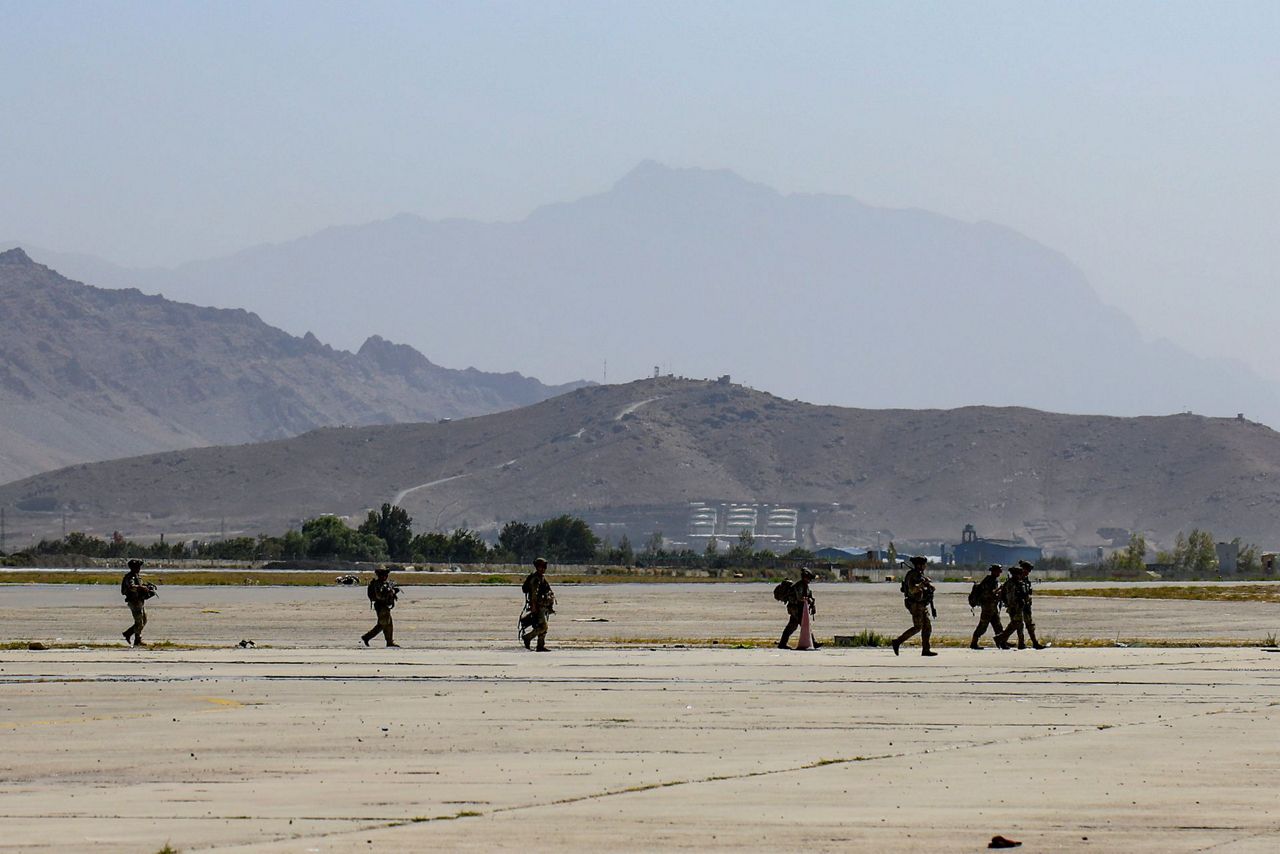 4 of 10
In this image provided by the U.S. Army, paratroopers assigned to the 1st Brigade Combat Team, 82nd Airborne Division conduct security operations as they continue to help facilitate the evacuation at Hamid Karzai International Airport in Kabul, Afghanistan on Wednesday, Aug 25, 2021. (Sgt. Jillian G. Hix/U.S. Army via AP) 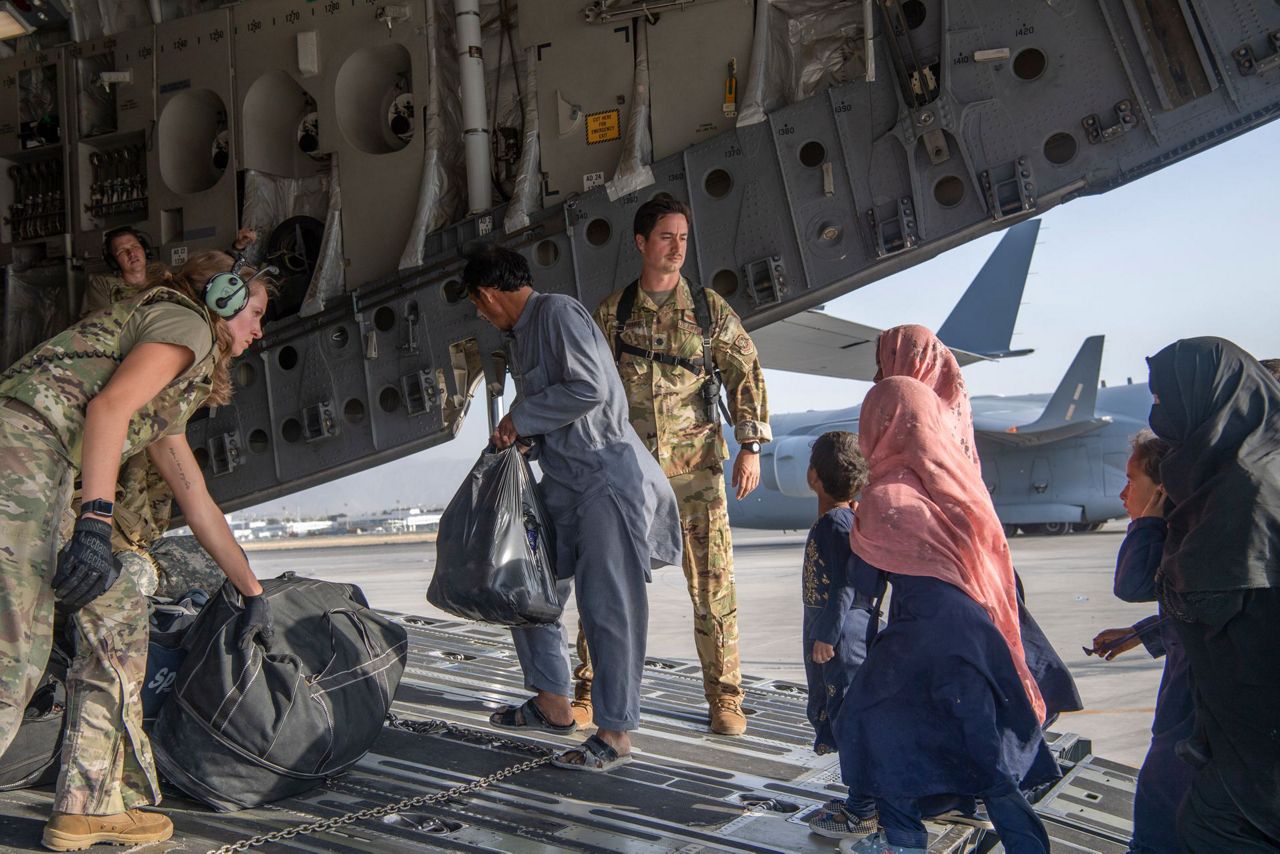 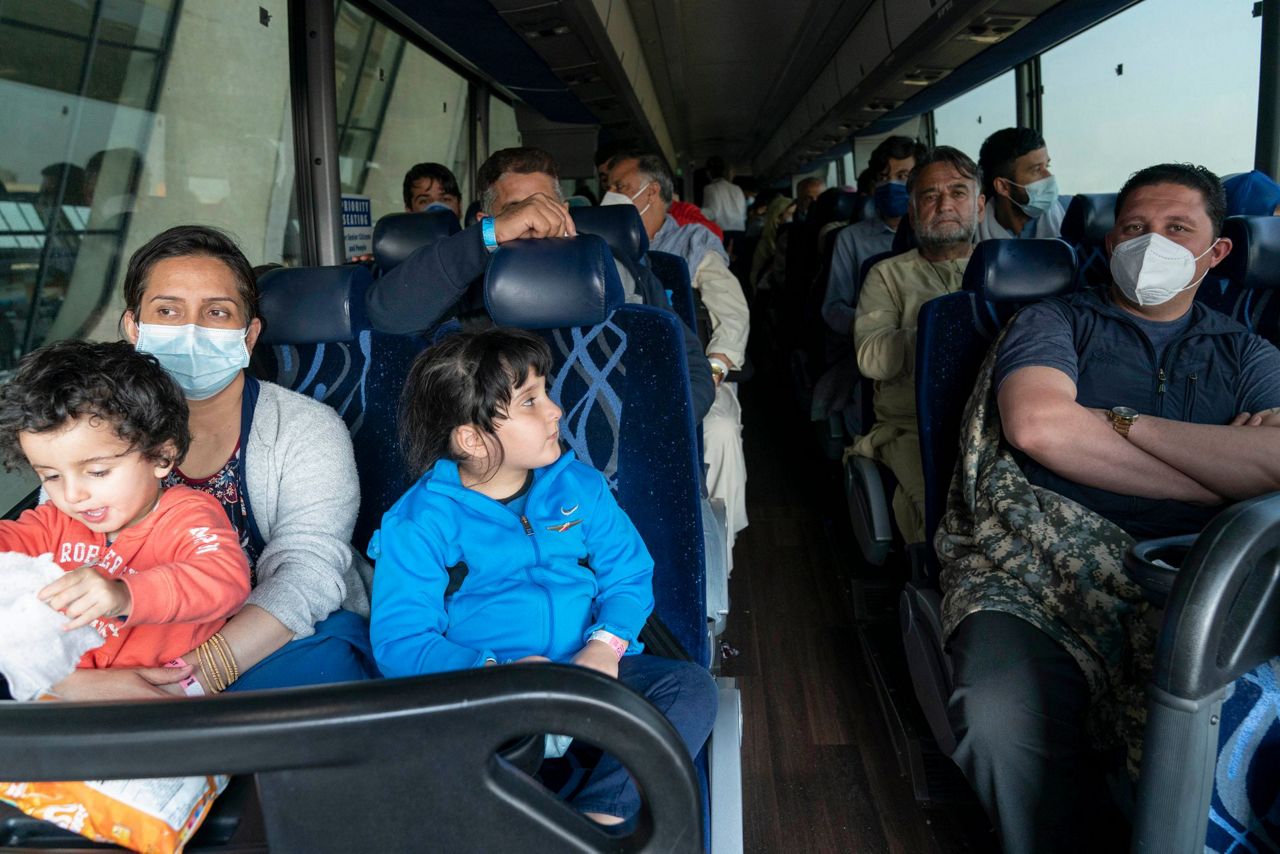 6 of 10
Families evacuated from Kabul, Afghanistan, wait inside a bus after they arrived at Washington Dulles International Airport, in Chantilly, Va., on Wednesday, Aug. 25, 2021. (AP Photo/Jose Luis Magana) 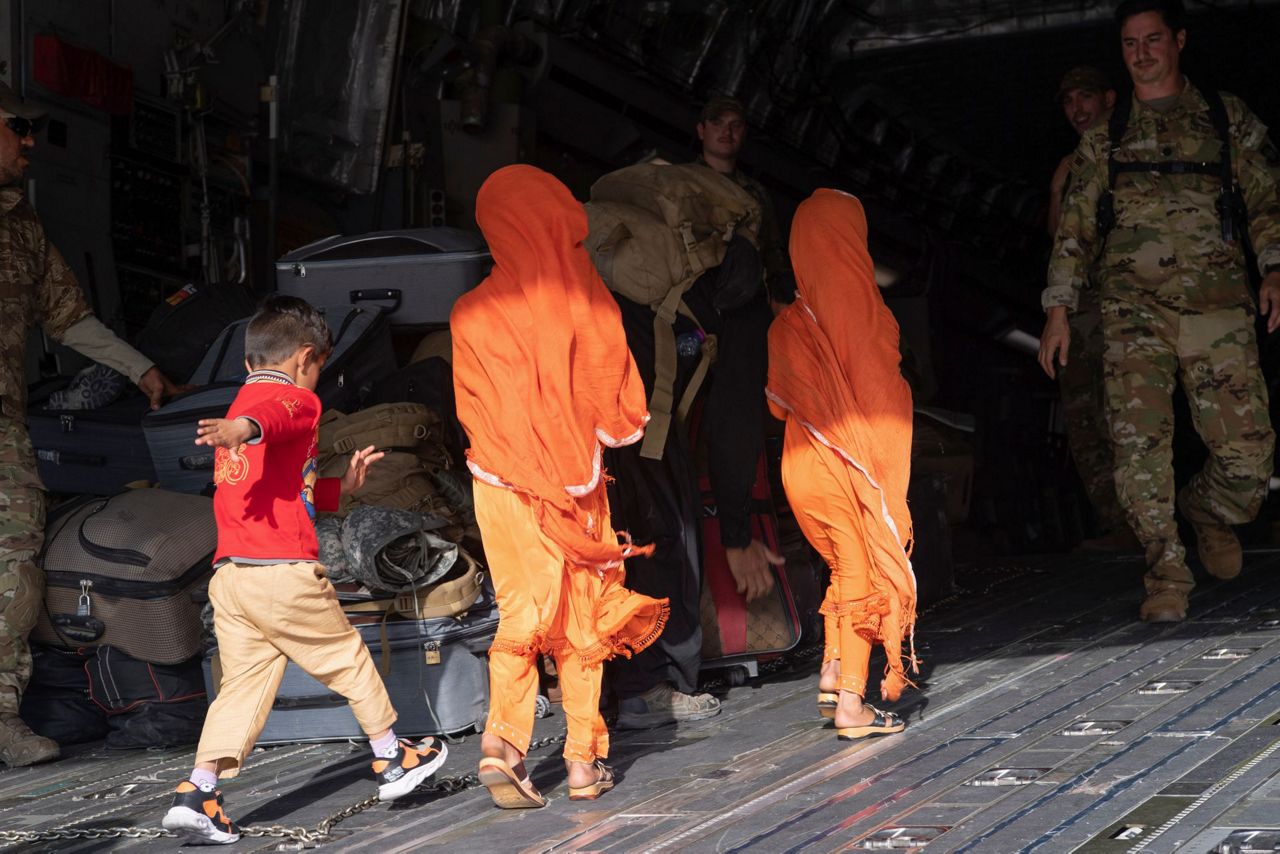 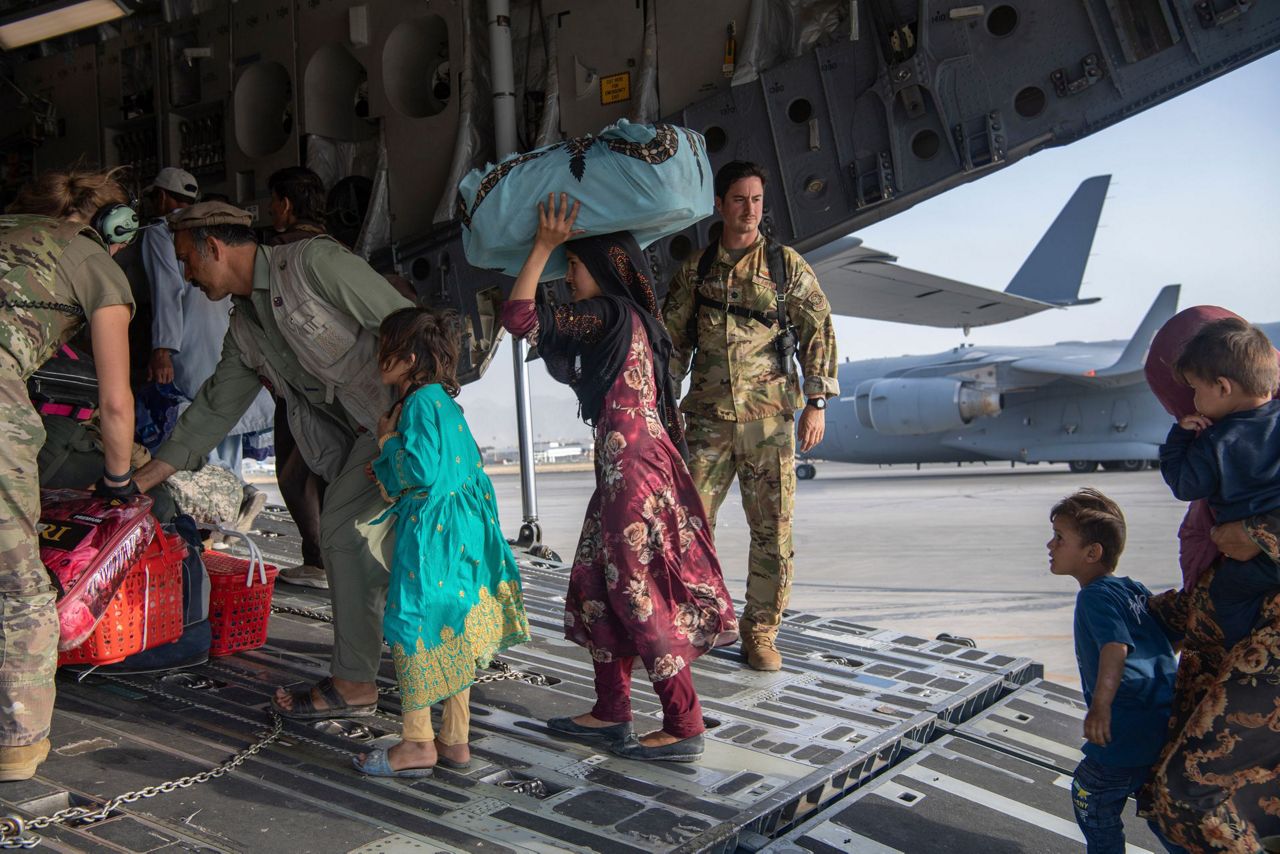 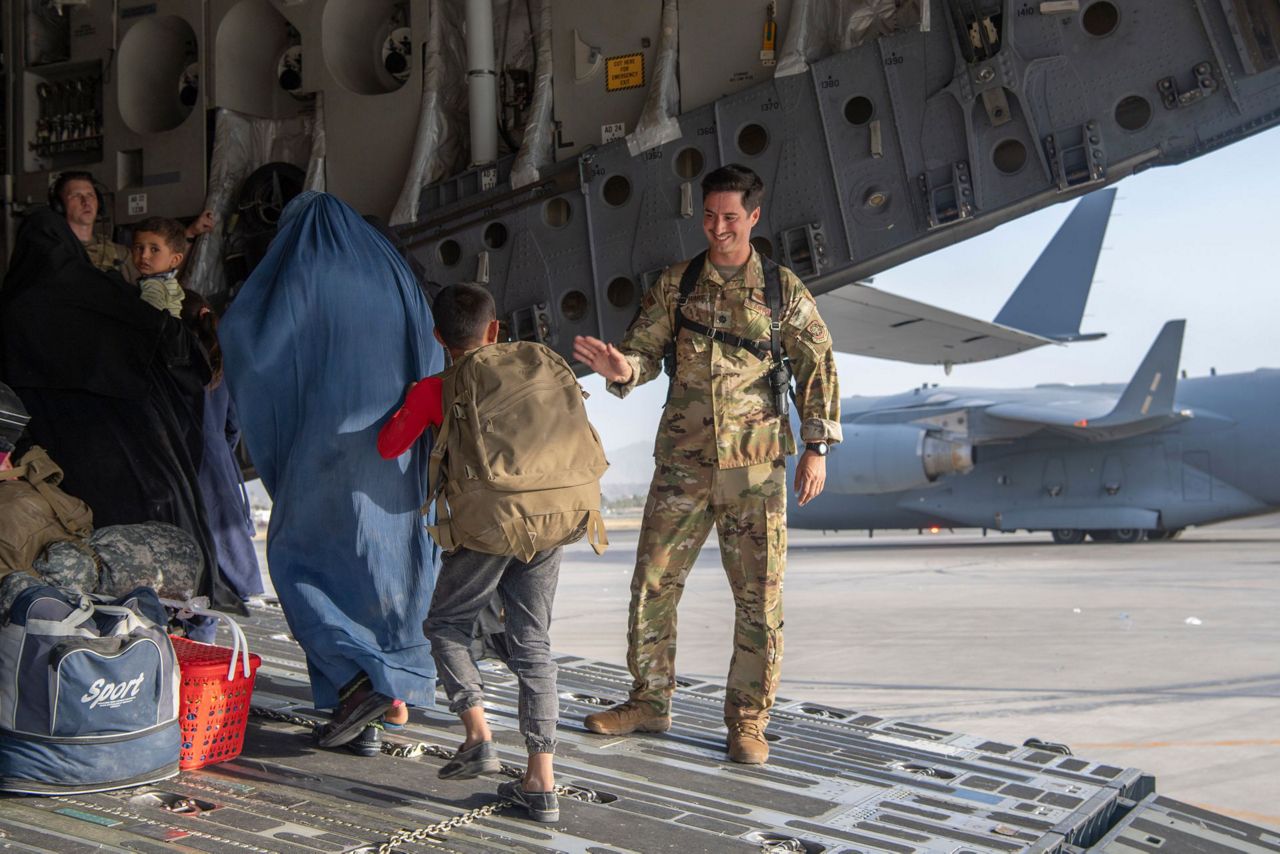 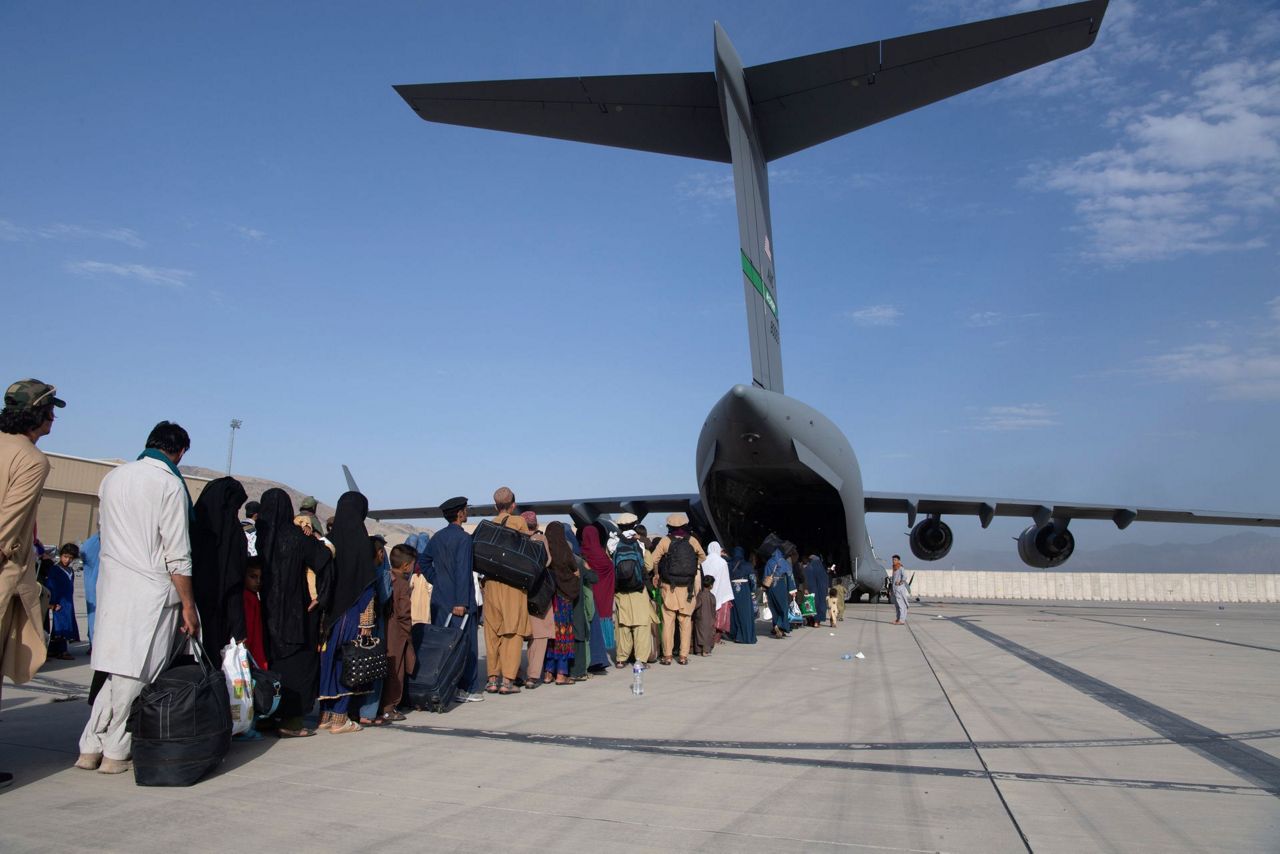 KABUL, Afghanistan (AP) — Western nations warned Thursday of a possible attack on Kabul’s airport, where thousands have flocked as they try to flee Taliban-controlled Afghanistan in the waning days of a massive airlift. Britain said an attack could come within hours.

Several countries urged people to avoid the airport, but with just days left before the evacuation effort ends and American troops withdraw, few appeared to heed the call. Over the last week, the airport has been the scene of some of the most searing images of the chaotic end of America's longest war and the Taliban's takeover, as flight after flight landed to pull out those who fear a return to the militants' brutal rule.

Already, some countries have ended their evacuations and begun to withdraw their soldiers and diplomats, likely signaling the beginning of the end of one of history's largest airlifts. The Taliban have so far honored a pledge not to attack Western forces during the evacuation, but insist the foreign troops must be out by America's self-imposed deadline of Aug. 31.

But overnight, new warnings emerged from Western capitals about a threat from Afghanistan’s Islamic State group affiliate, which likely has seen its ranks boosted by the Taliban’s freeing of prisoners during their blitz across the country.

British Armed Forces Minister James Heappey told the BBC on Thursday there was ”very, very credible reporting of an imminent attack” at the airport, possibly within “hours.”

Heappey conceded that people are desperate to leave and “there is an appetite by many in the queue to take their chances, but the reporting of this threat is very credible indeed and there is a real imminence to it.”

"There is every chance that as further reporting comes in, we may be able to change the advice again and process people anew, but there’s no guarantee of that,” he added.

Late Wednesday, the U.S. Embassy warned citizens at three airport gates to leave immediately due to an unspecified security threat. Australia, Britain and New Zealand also advised their citizens Thursday not to go to the airport, with Australia's foreign minister saying there was a “very high threat of a terrorist attack.”

Taliban spokesman Zabihullah Mujahid denied that any attack was imminent. “It’s not correct,” he wrote in a text message after being asked about the warnings. He did not elaborate.

The warnings come as many Afghan are fleeing the country in the wake of the Taliban’s takeover of Afghanistan. The hard-line Islamic group wrested back control of the country nearly 20 years after being ousted in a U.S.-led invasion following the 9/11 attacks, which al-Qaida orchestrated while being sheltered by the group.

Amid concerns about attacks, military cargo planes leaving Kabul airport already use flares to disrupt any potential missile fire. But troops also worry about the teeming crowds outside the airport.

While the Taliban and others have tried to control them, there's no formal screening process as there was under Afghanistan's former government. That raises the risk that someone could slip through and detonate explosives in the crowd.

Belgian Prime Minister Alexander De Croo said his country had been warned about just that kind of attack.

“We received information at the military level from the United States, but also from other countries, that there were indications that there was a threat of suicide attacks on the mass of people,” he said, talking about the threat around Kabul airport.

Senior U.S. officials said Wednesday's warning from the embassy was related to specific threats involving the Islamic State group and potential vehicle bombs. The officials spoke on condition of anonymity because they were not authorized to discuss ongoing military operations.

The Islamic State affiliate in Afghanistan grew out of disaffected Taliban members who hold an even-more extreme view of Islam. Naming themselves after Khorasan, a historic name for the greater region, the extremists embarked on a series of brutal attacks in Afghanistan that included a 2020 assault on a maternity hospital in Kabul that saw infants and women killed.

The Taliban have fought against Islamic State militants in Afghanistan. However, their advance across the country likely saw IS fighters freed alongside the Taliban's own. There are particular concerns that extremists may have seized heavy weapons and equipment abandoned by Afghan troops who fled the Taliban advance.

Amid the warnings and the pending American withdrawal, some European nations said they would have to end their evacuations.

French Prime Minister Jean Castex told French radio RTL on Thursday that “from tomorrow evening onwards, we are not able to evacuate people from the Kabul airport” due to the upcoming American withdrawal.

Danish defense minister Trine Bramsen bluntly warned: “It is no longer safe to fly in or out of Kabul.”

Denmark's last flight, carrying 90 people plus soldiers and diplomats, has already departed, and Poland and Belgium have also announced the end of their evacuations. The Dutch government said it had been told by the U.S. to leave Thursday.

The Taliban have said they'll allow Afghans to leave via commercial flights after the deadline next week, but it remains unclear which airlines would return to an airport controlled by the militants. Turkish presidential spokesman Ibrahim Kalin said talks were underway between his country and the Taliban about allowing Turkish civilian experts to help run the facility. But Turkish troops are starting to withdraw currently, he said.

The Taliban has promised to return Afghanistan to security and pledged they won't seek revenge on those who opposed them or roll back progress on human rights. But many Afghans are skeptical.

Fueling fears of what Taliban rule might hold, a journalist from private broadcaster Tolo News described being beaten by Taliban along with a cameraman from the channel. Ziar Yad said the fighters beat him and his colleague and confiscated their cameras, technical equipment and a mobile phone as they tried to report on poverty in Kabul.

“I still don’t know why they behaved like that and suddenly attacked me,” Yad wrote on Twitter. “The issue has been shared with Taliban leaders; however, the perpetrators have not yet been arrested, which is a serious threat to freedom of expression.”