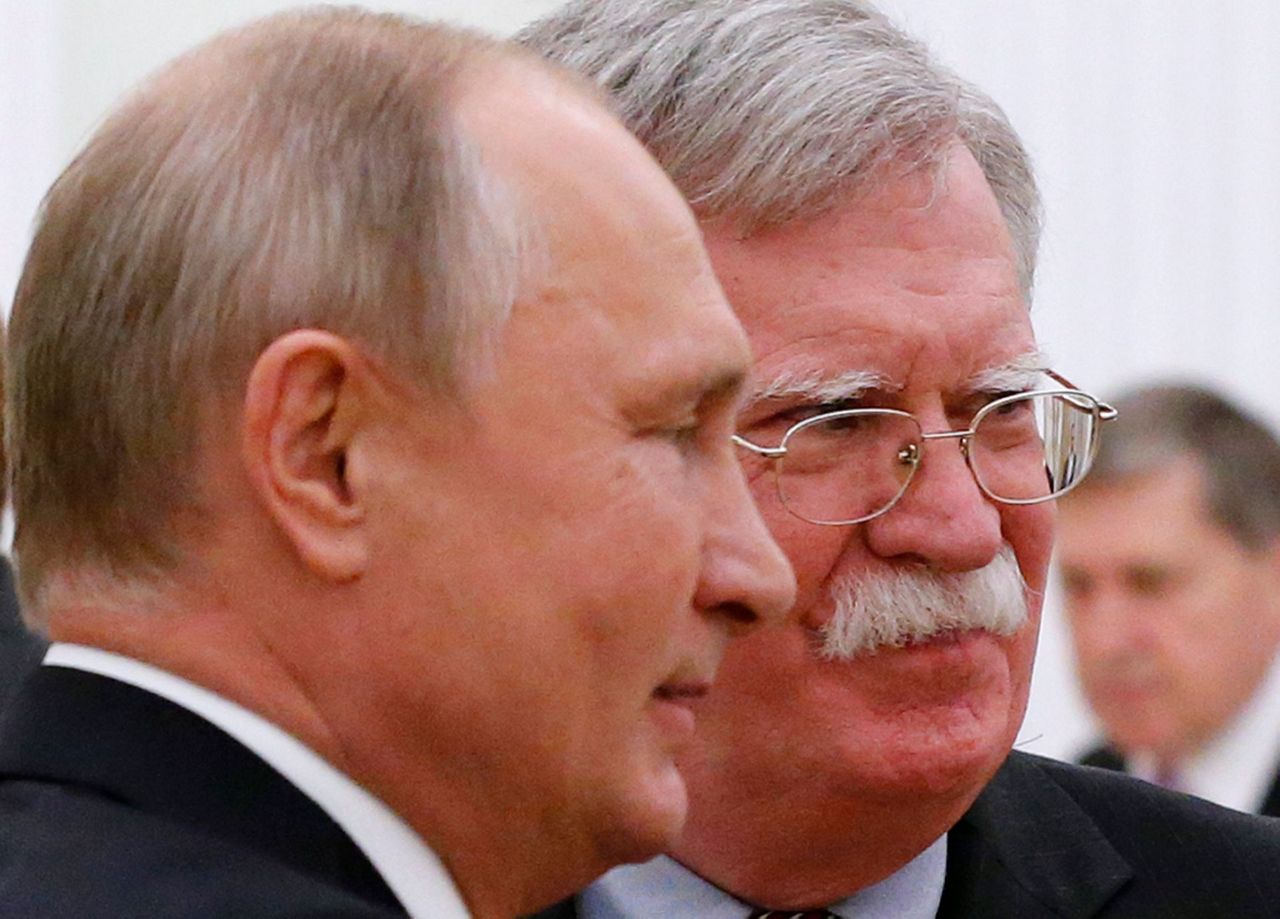 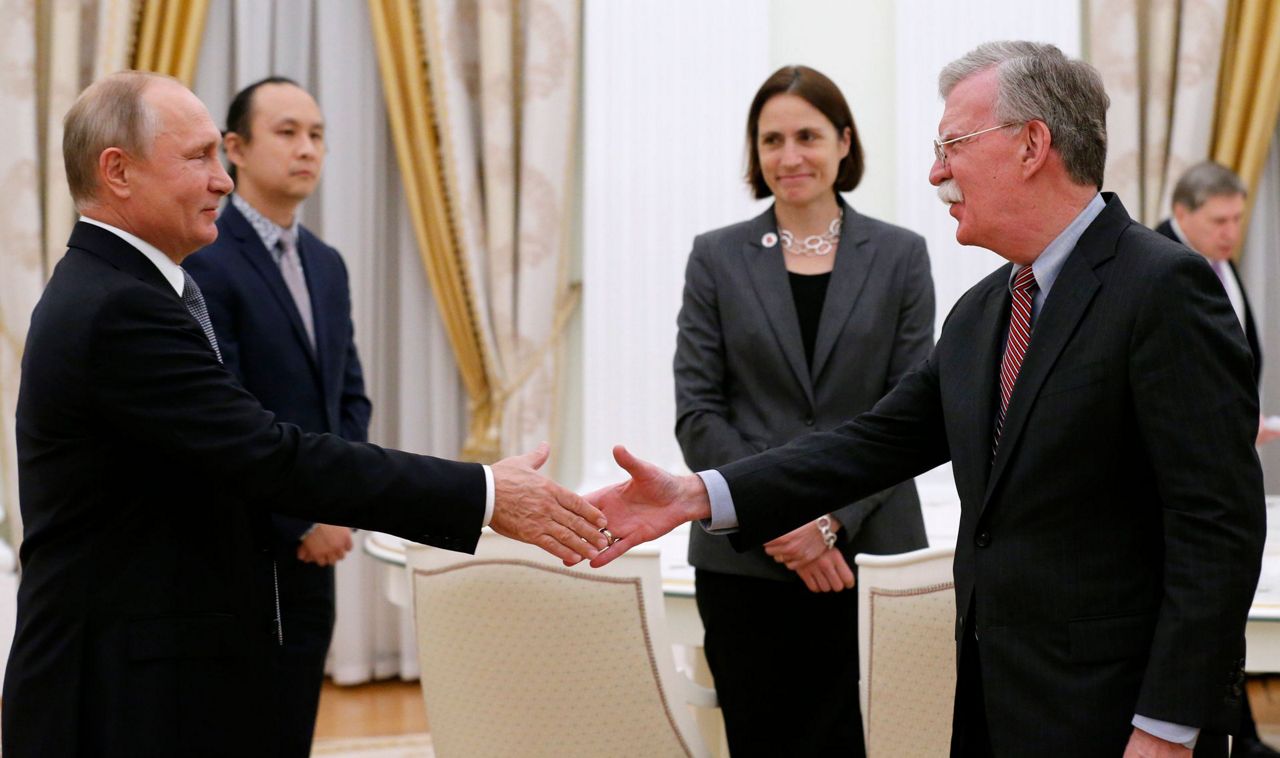 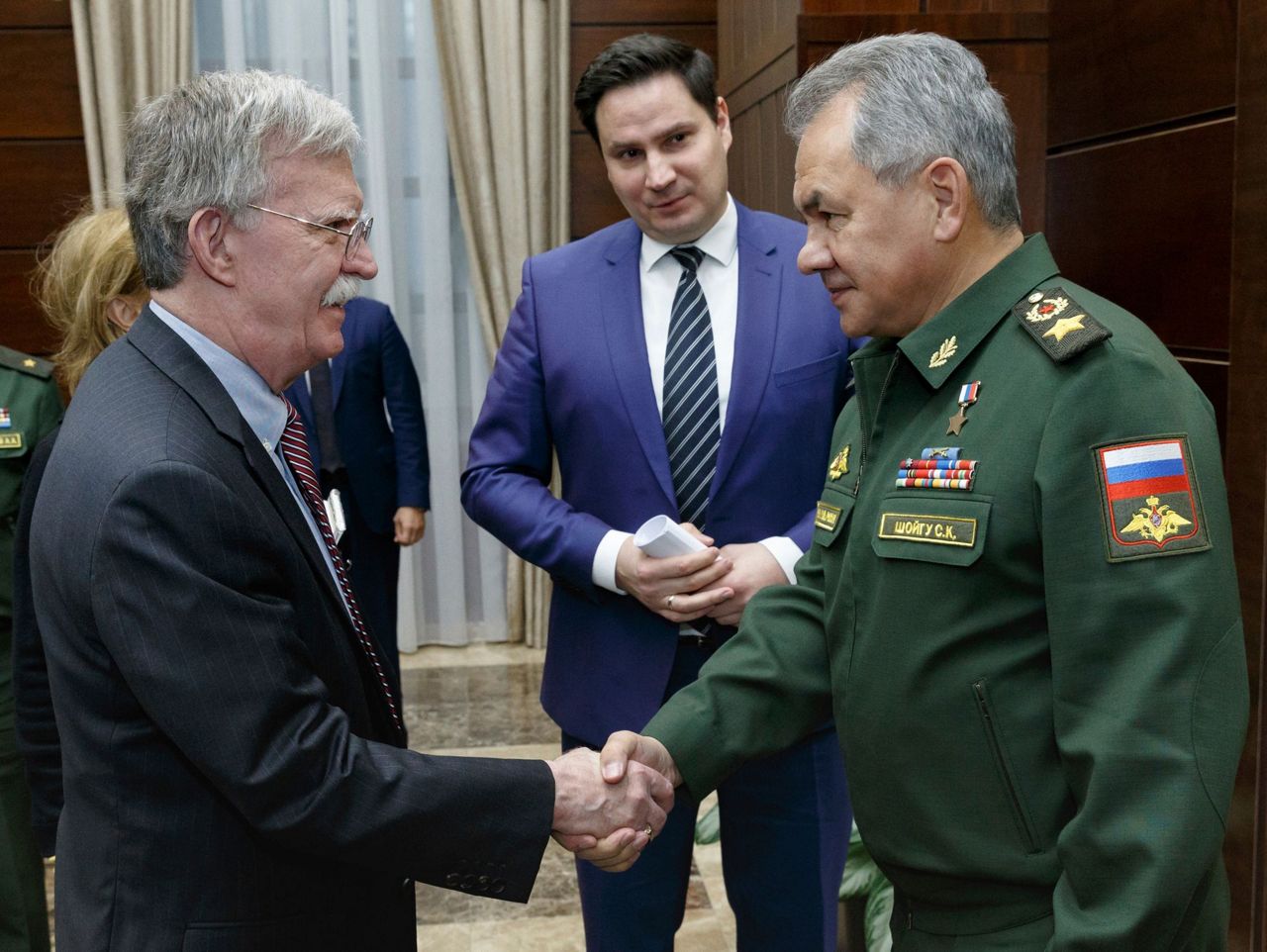 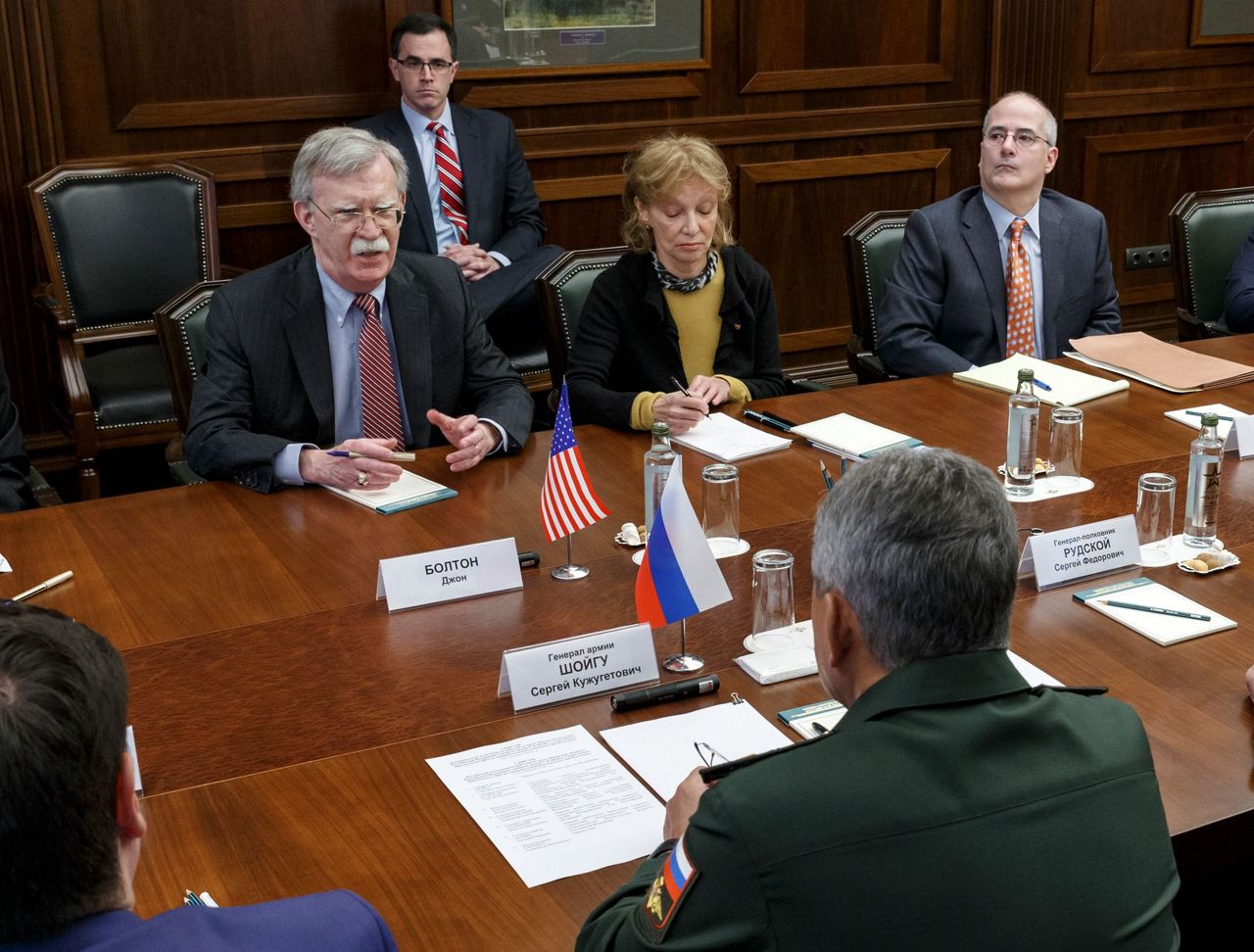 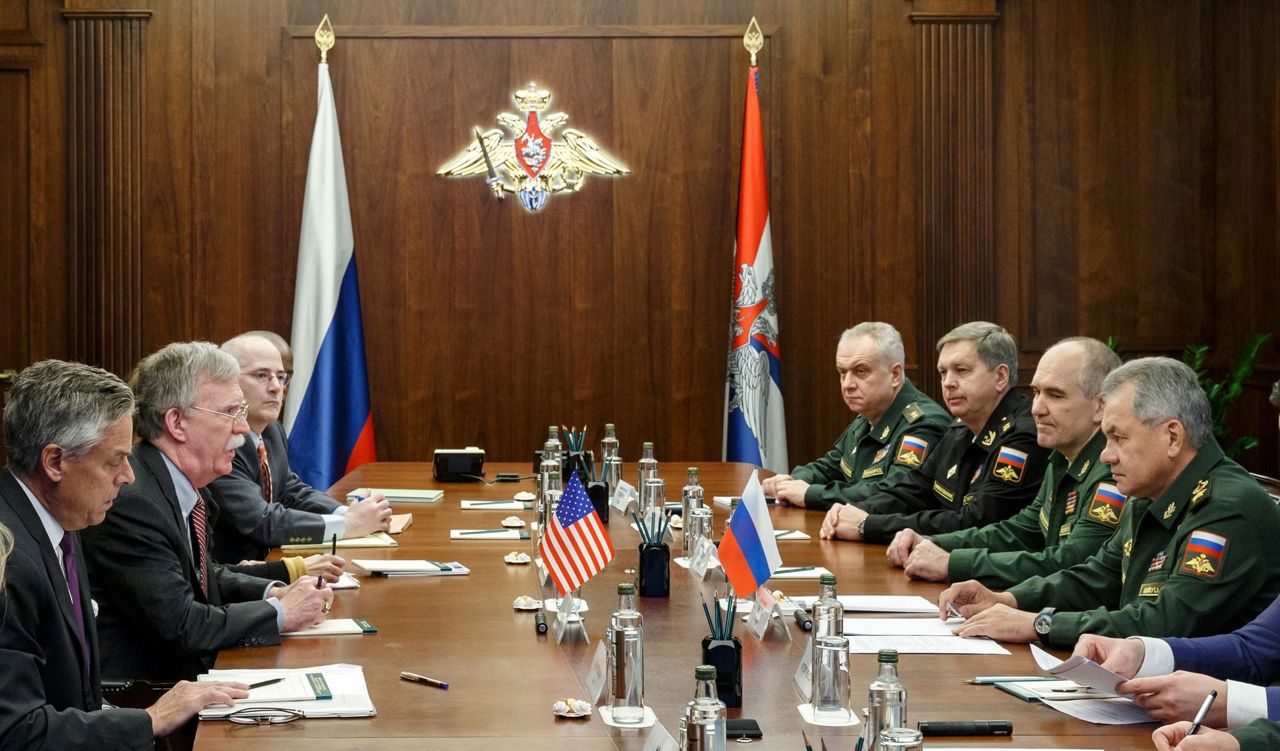 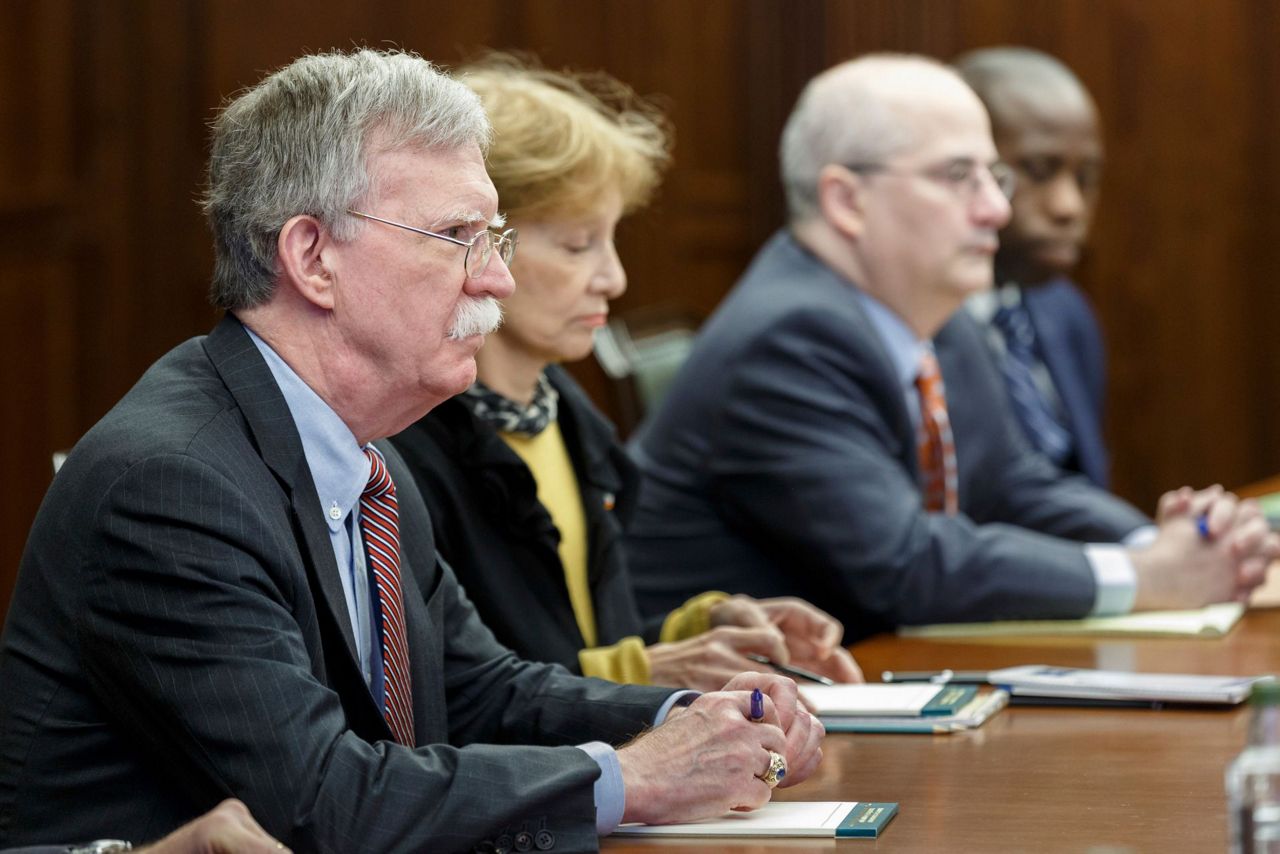 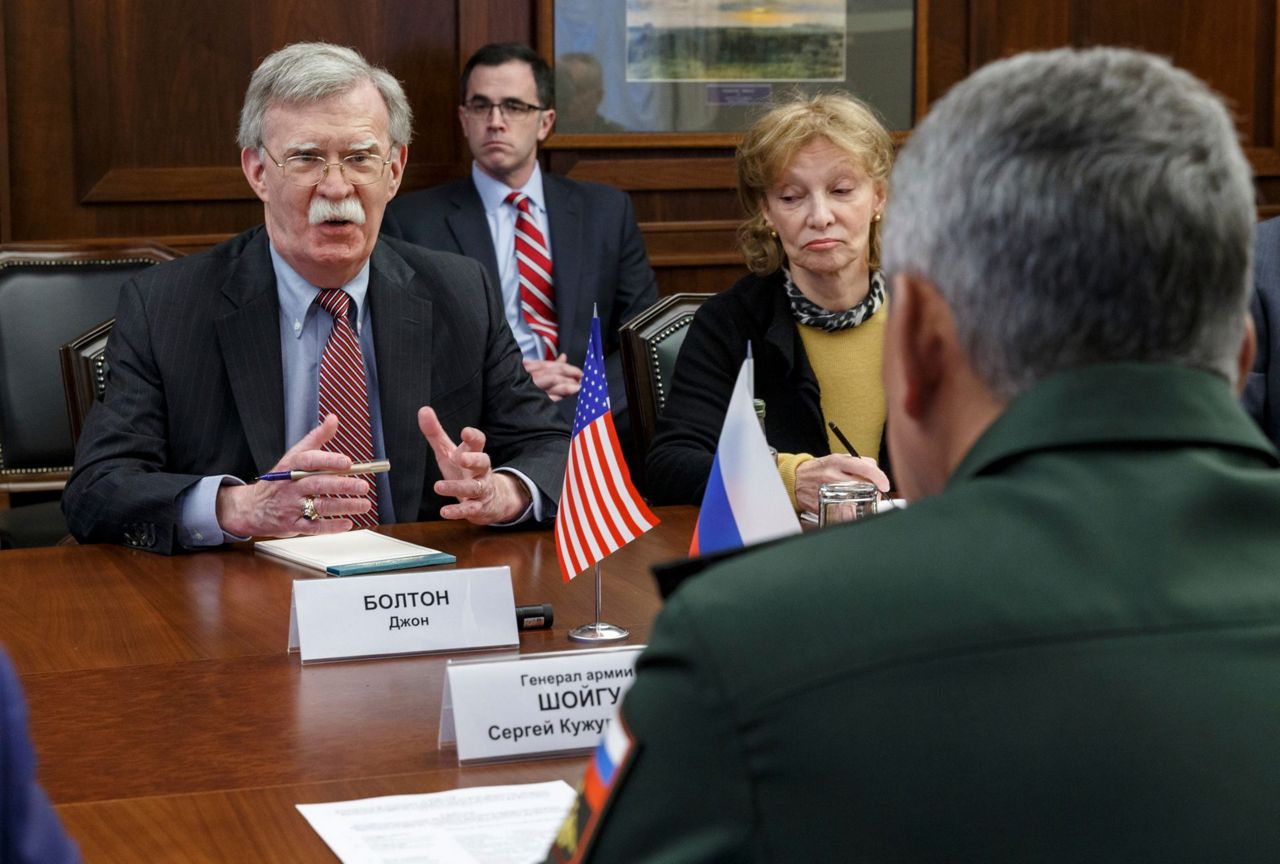 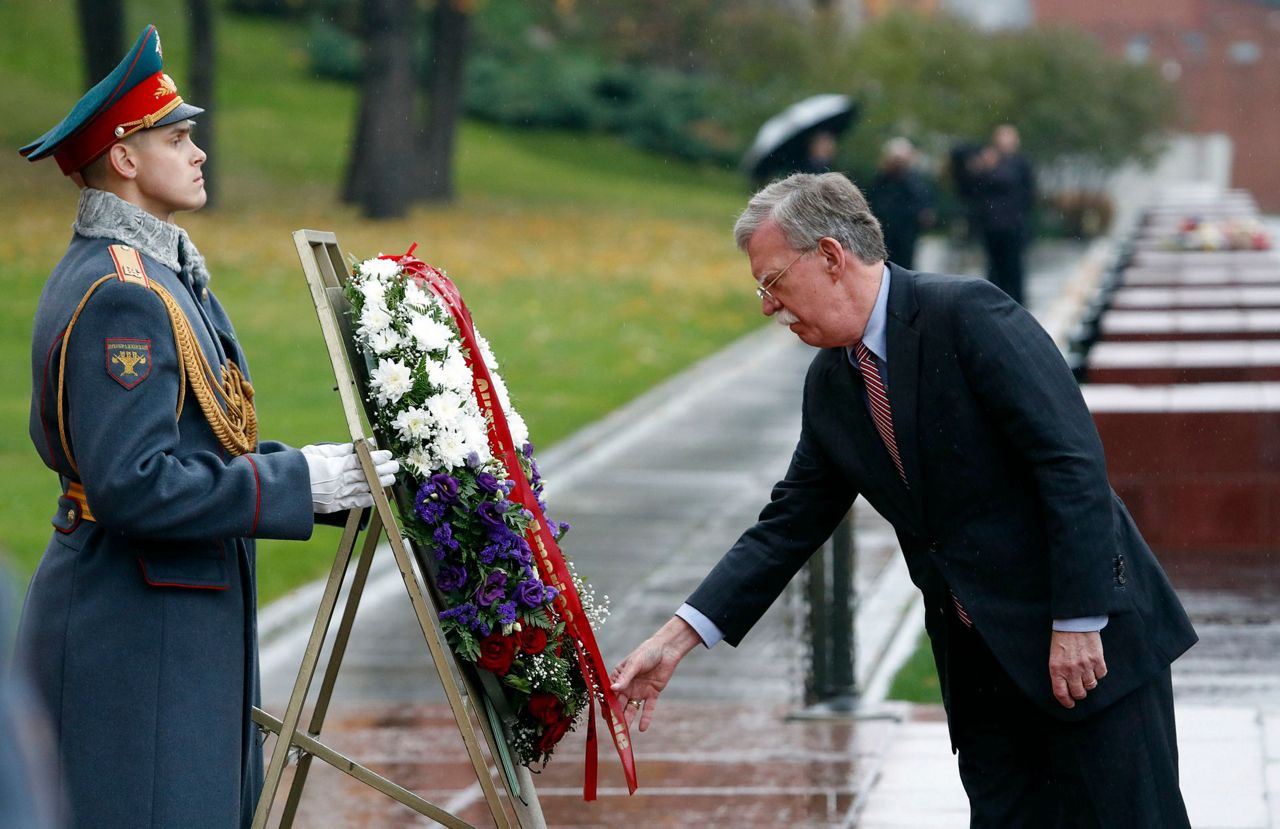 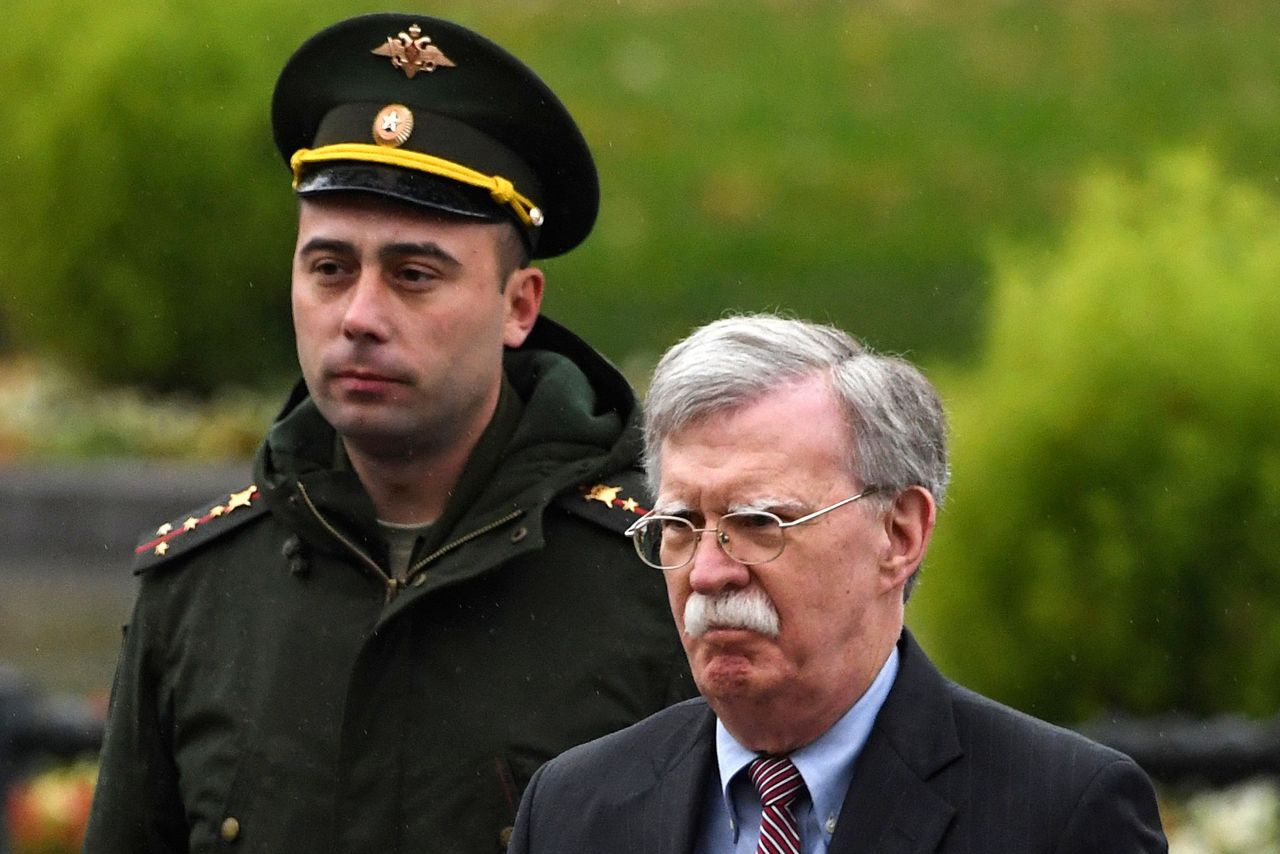 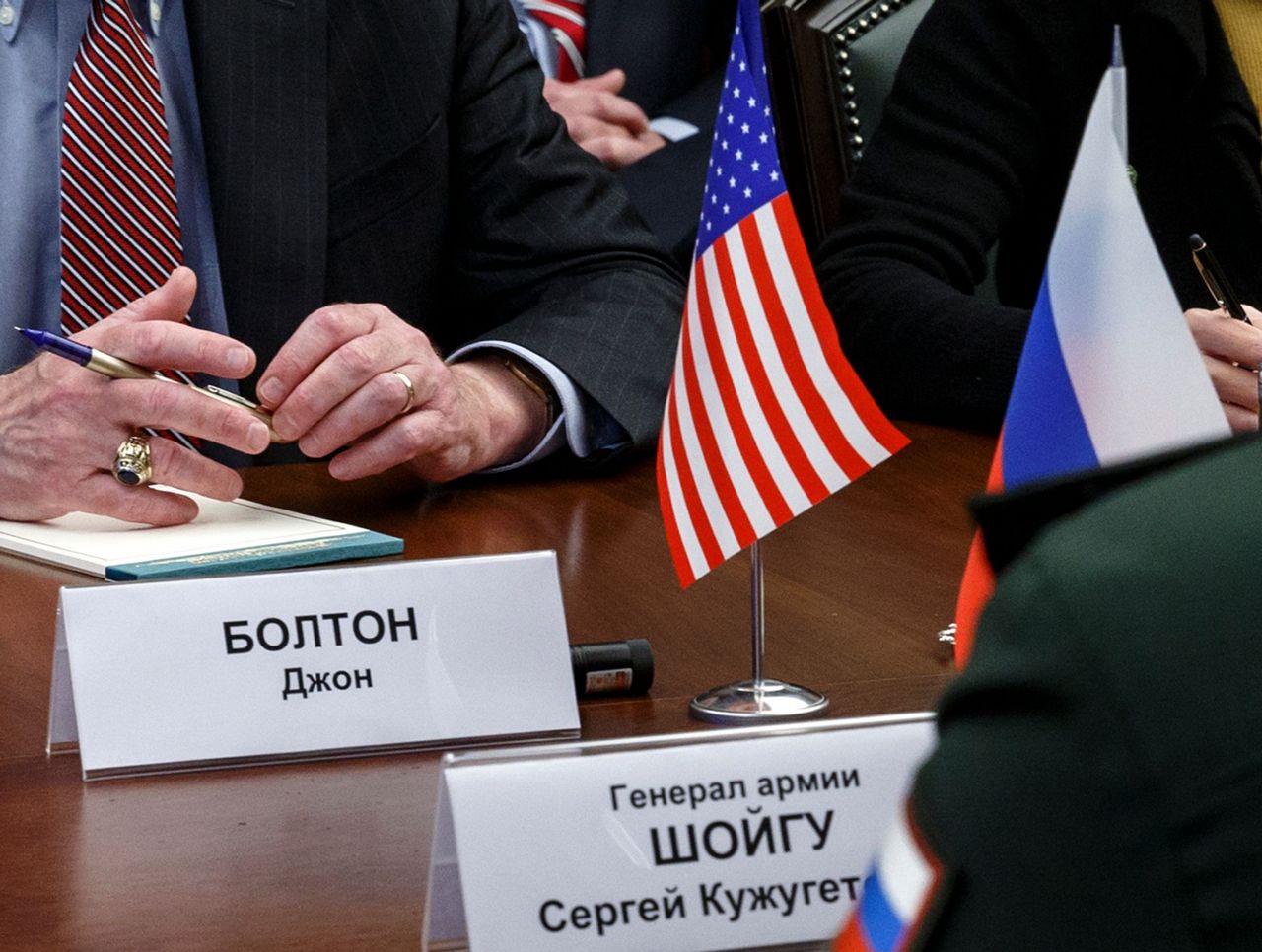 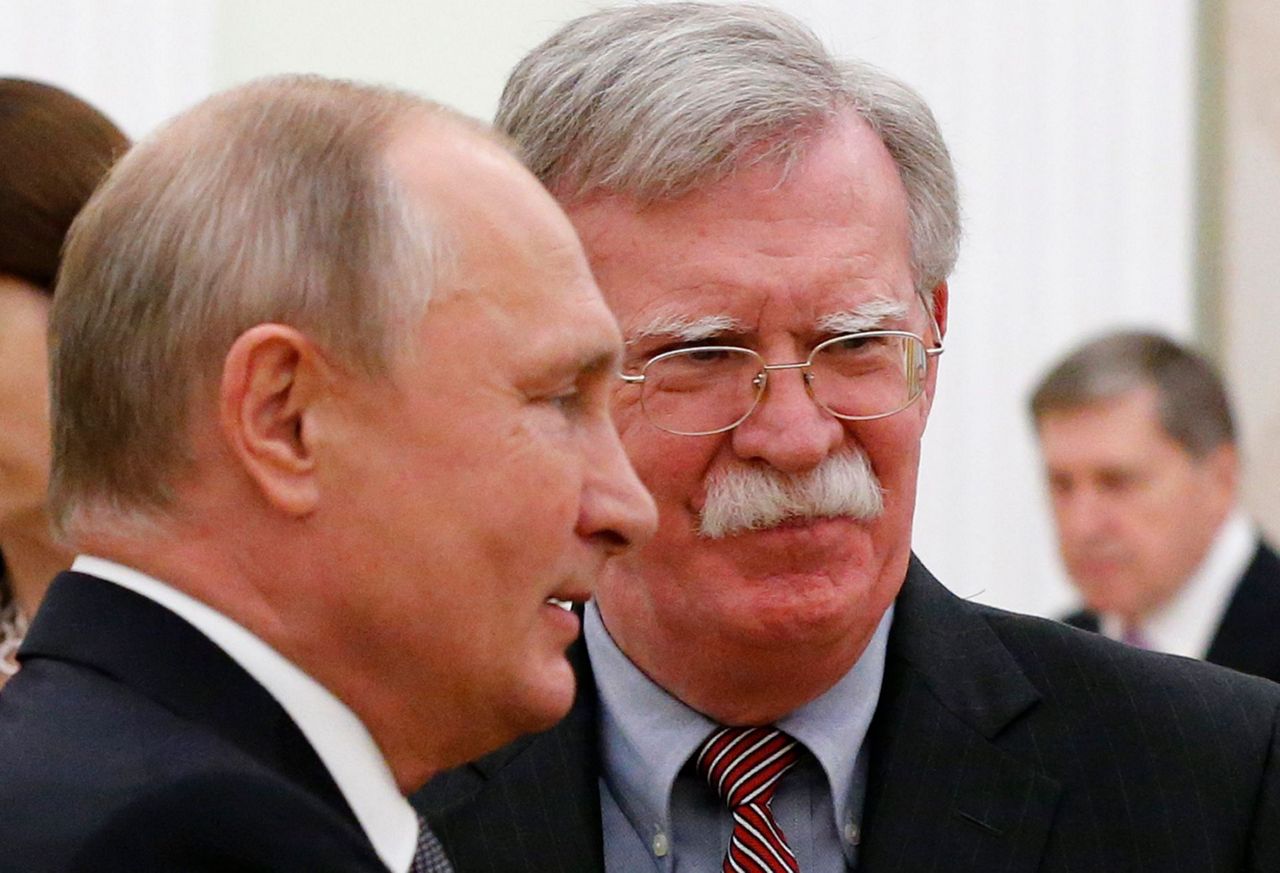 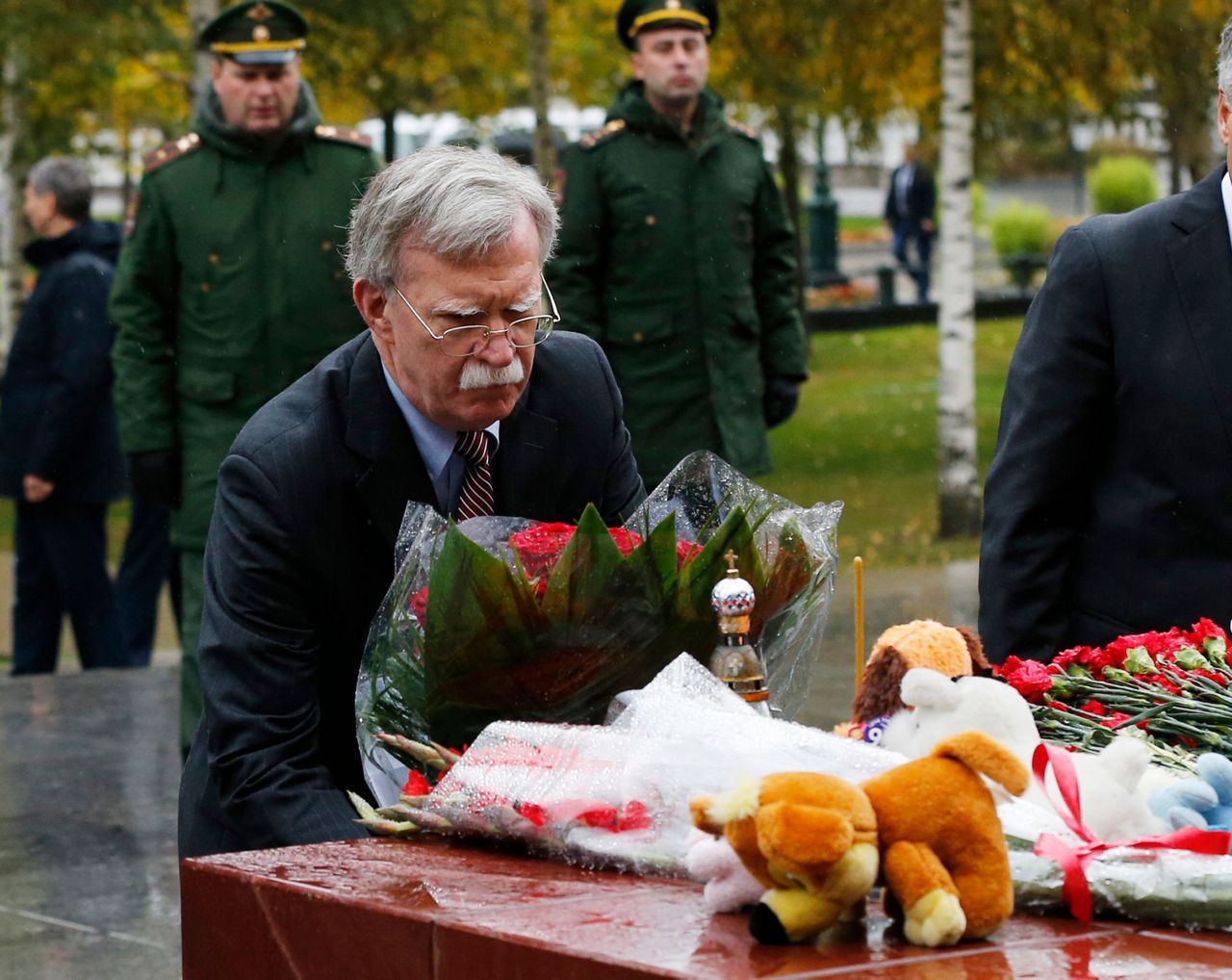 12 of 19
U.S. National Security Adviser John Bolton carries a bouquet of red roses during a flower-laying ceremony at a memorial in memory of the victims of last week's attack on a vocational college in Kerch, on the Crimean peninsula, in the Alexander Garden near the Kremlin, in Moscow, Russia, Tuesday, Oct. 23, 2018. U.S. President Donald Trump's national security adviser Bolton struck a conciliatory note Tuesday in talks in Moscow, just days after Trump vowed to pull out of a key arms control treaty with Russia. (AP Photo/Alexander Zemlianichenko, Pool) 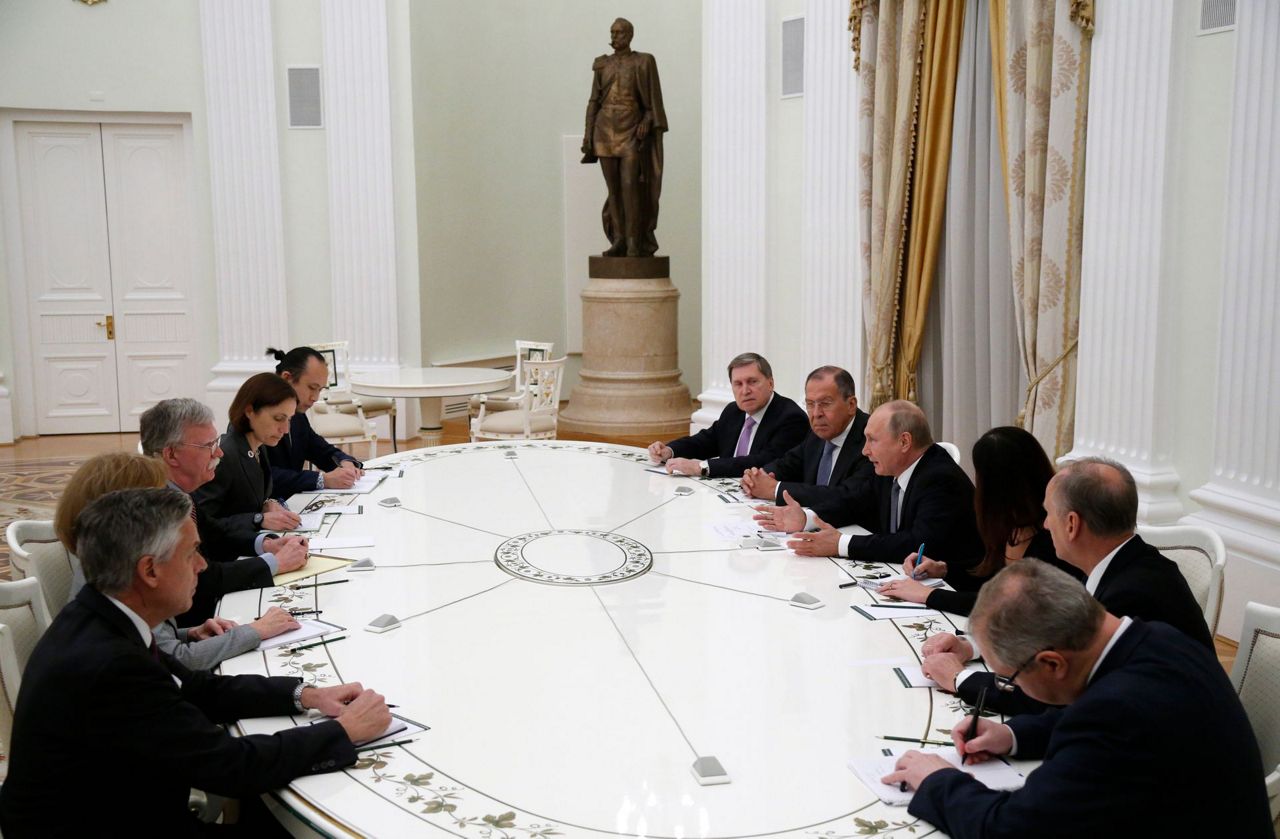 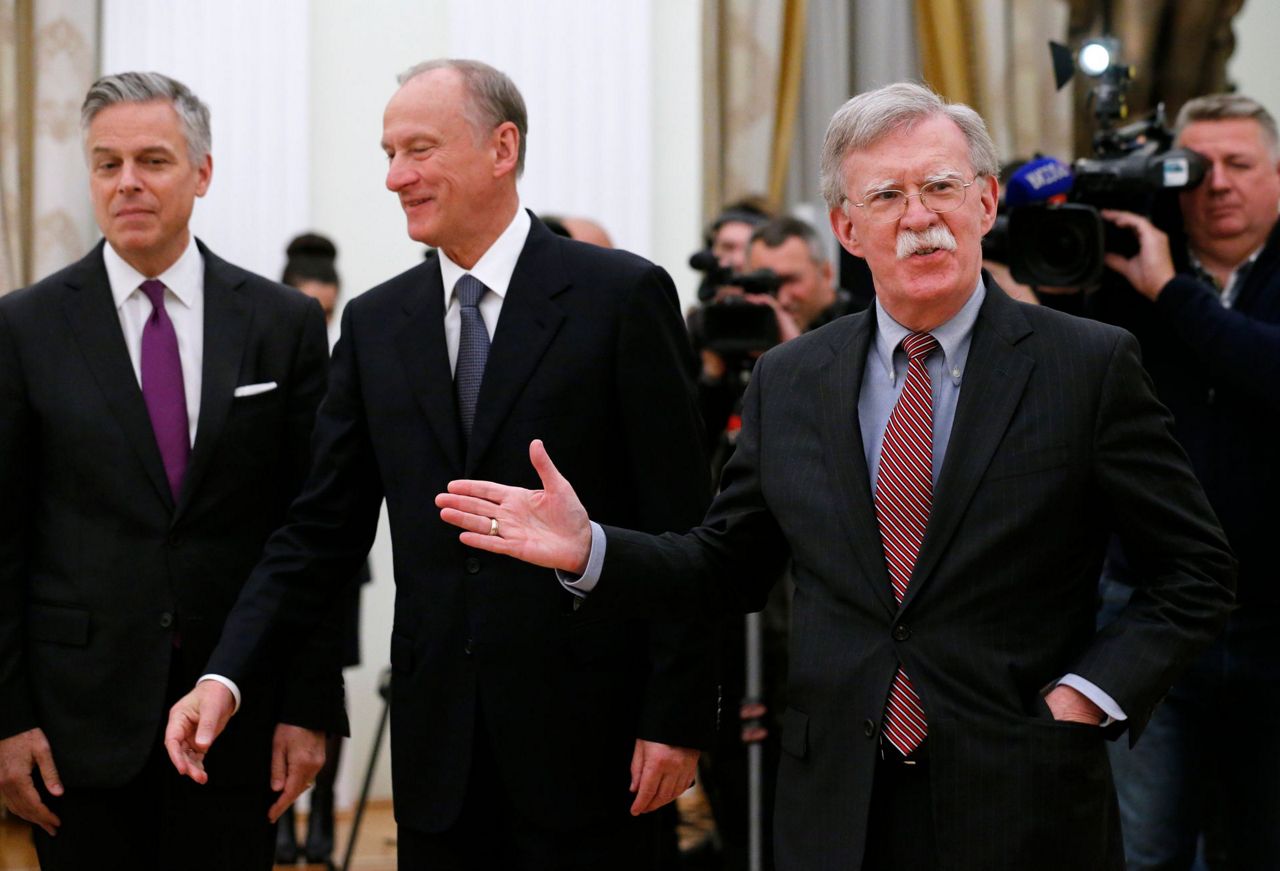 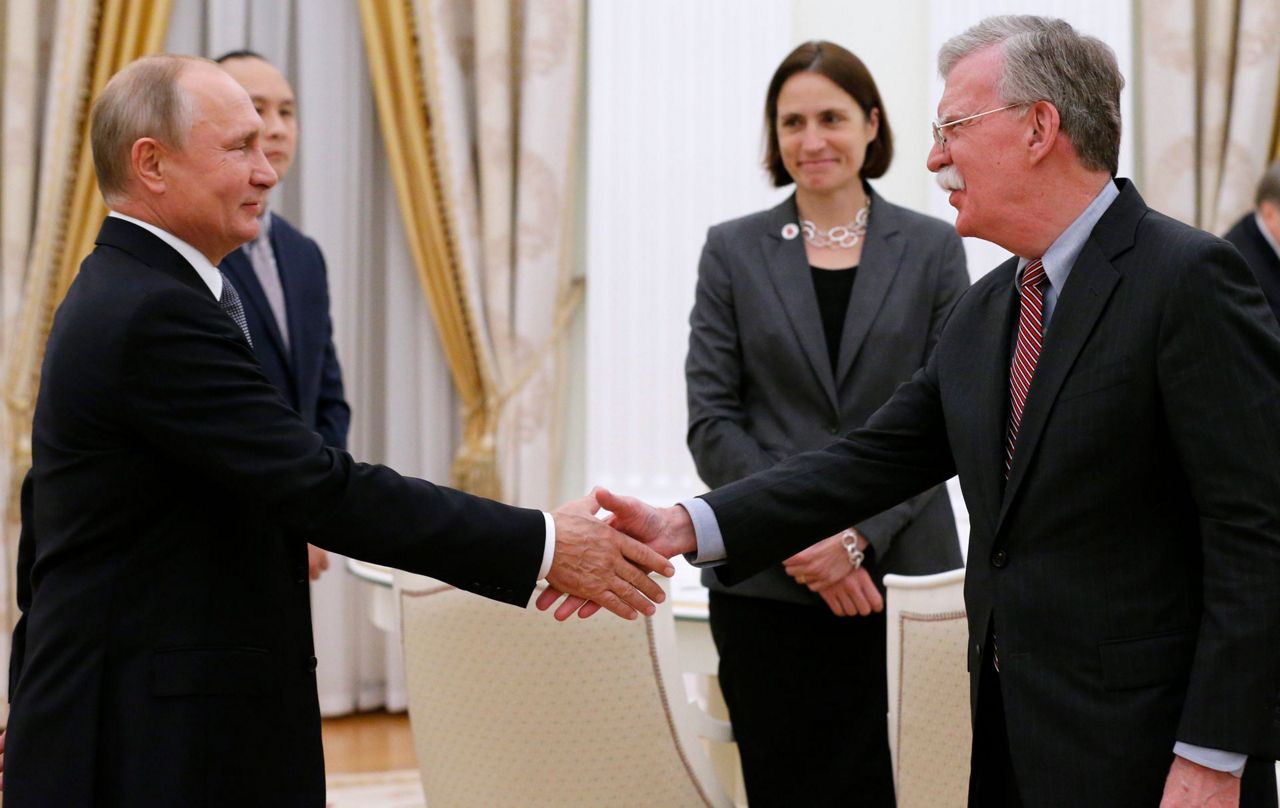 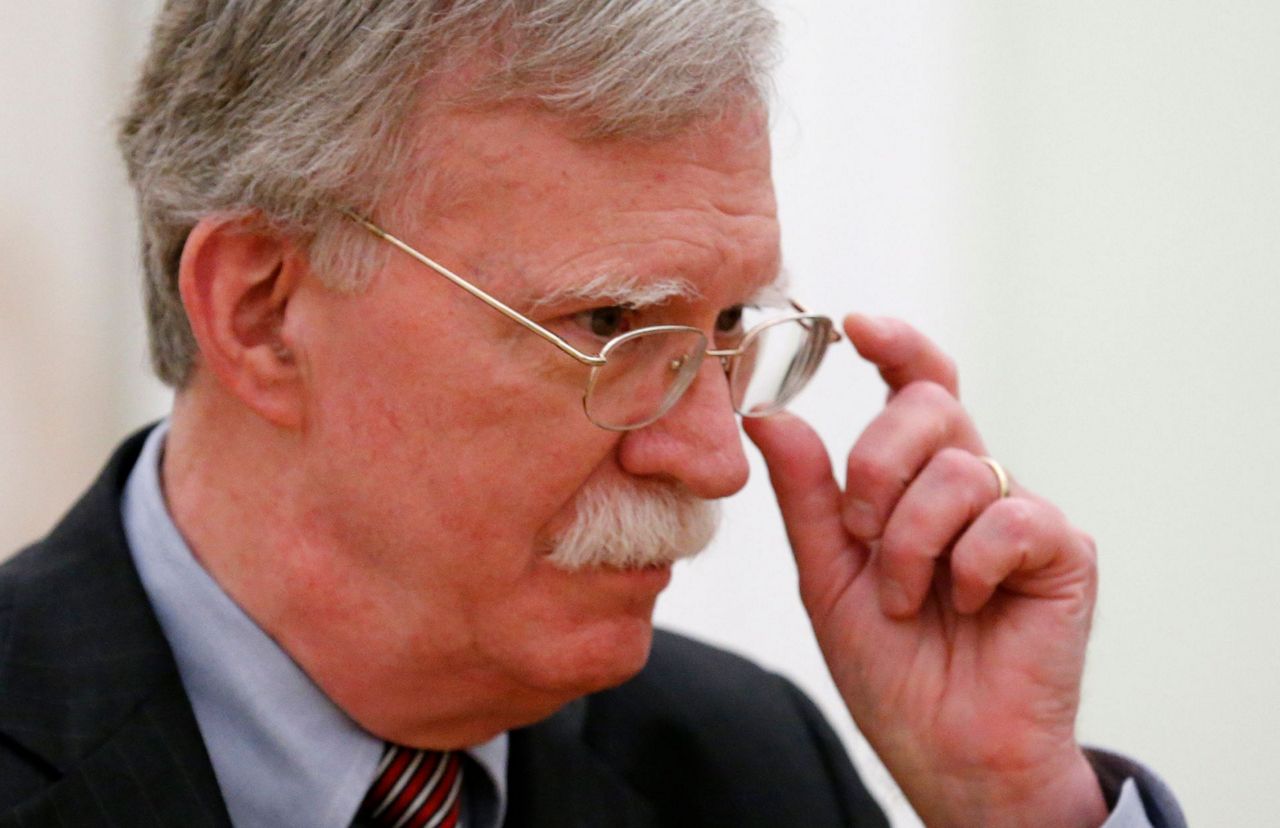 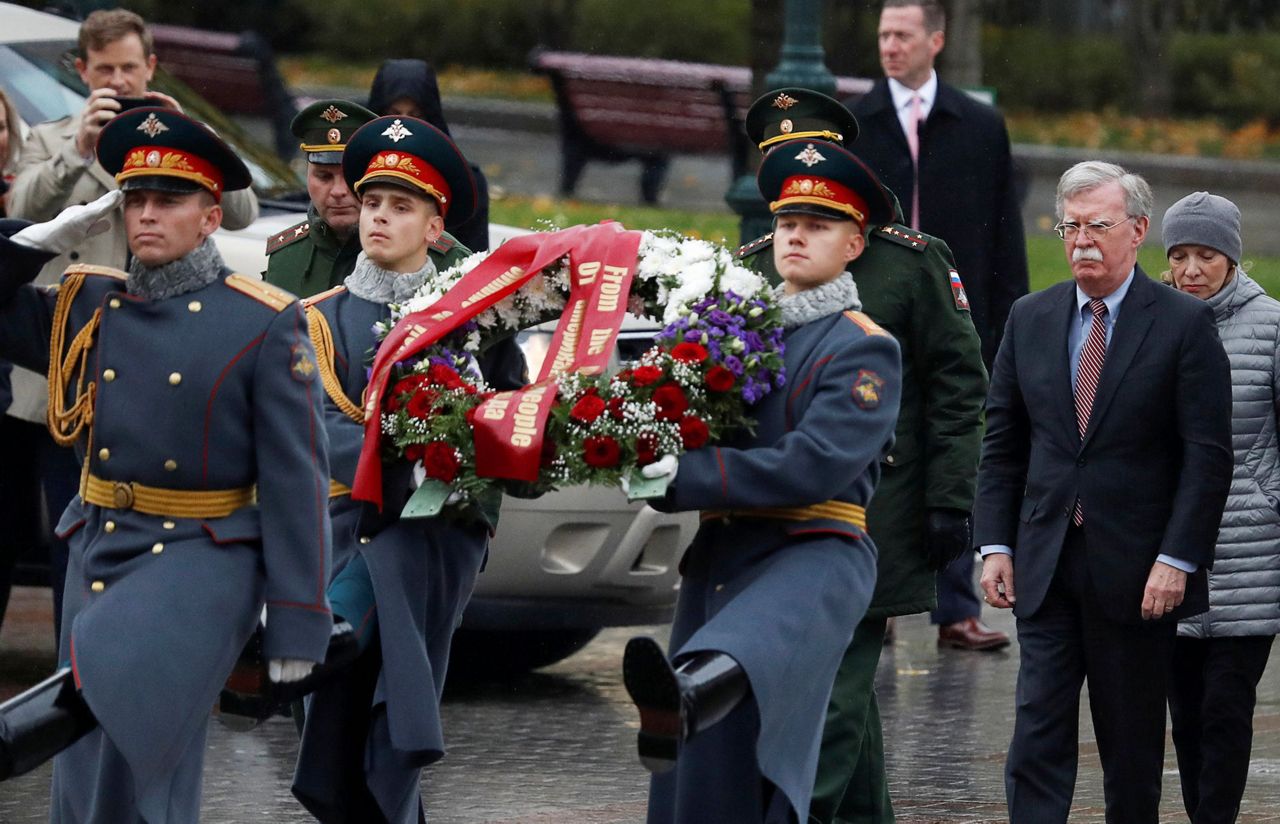 18 of 19
U.S. National Security Adviser John Bolton, second from right, arrives for a wreath laying ceremony at the Tomb of the Unknown Soldier by the Kremlin wall in Moscow, Russia, Tuesday, Oct. 23, 2018. U.S. President Donald Trump's national security adviser Bolton struck a conciliatory note Tuesday in talks in Moscow, just days after Trump vowed to pull out of a key arms control treaty with Russia. (Sergei Karpukhin/Pool Photo via AP) 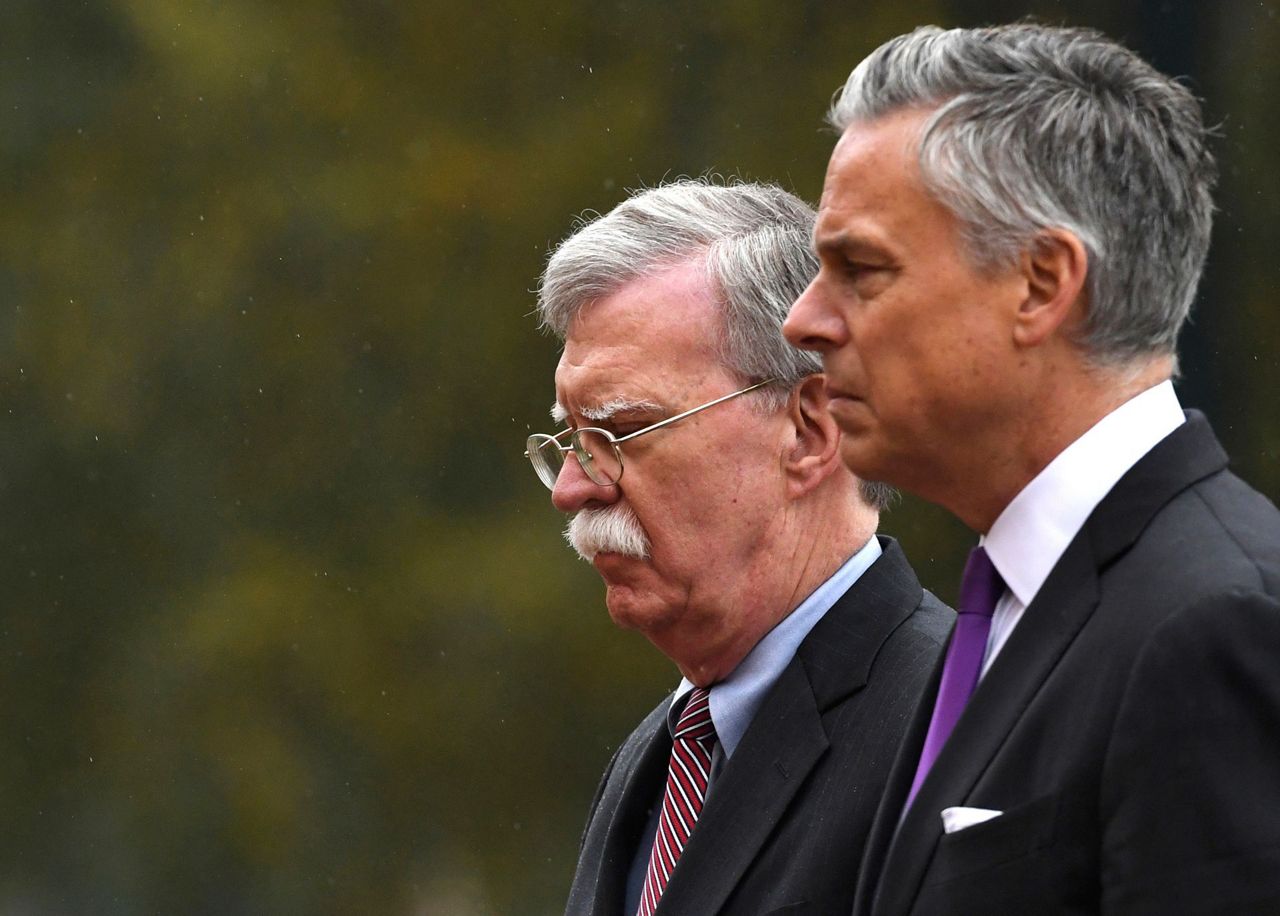 MOSCOW (AP) — Russian President Vladimir Putin poked fun at the official seal of the United States while hosting U.S. President Donald Trump's national security adviser Tuesday, saying he wondered if the American eagle had plucked all the olives from the branch in its talon.

While sitting down with John Bolton at the Kremlin, Putin mentioned Trump's stated intent to pull the U.S. out of a pivotal arms control treaty. He said Moscow also was aware of Washington's doubts about extending another landmark nuclear treaty and its plans to deploy elements of missile defense in space.

The Russian leader then referred to the Great Seal of the United States, which includes a bald eagle holding a bundle of 13 arrows in one talon and an olive branch with 13 olives in another.

"I have a question: Has your eagle picked all the olives and only has arrows left?" Putin asked with a laugh.

But while underlining the differences between Russia and the U.S., Putin also emphasized the need to maintain a dialogue, saying he would be ready to meet with Trump in Paris during centenary commemorations next month marking the end of World War I.

Putin said his last meeting with Trump in Helsinki in July was useful despite their tough discussion, adding that he would be open to meet with Trump in France "if the U.S. side is interested in such contacts."

Bolton responded that Trump would look forward to seeing Putin in Paris on the sideline of events marking 100 years since Armistice Day, which is Nov. 11.

"Despite our differences which exist because of our different national interests, it's still important to work in areas where there is a possibility of mutual cooperation," Bolton said.

"Hopefully, I will have some answers for you," he said. "But I didn't bring any more olives."

"That's what I thought," Putin quipped.

The Russian leader further demonstrated his knowledge of U.S. symbols, citing the motto written on the scroll the eagle holds in its beak — "Out of Many, One" — as reflecting the need to find common ground despite various viewpoints.

Putin and Bolton laughed as they exchanged the quips at the start of the meeting, setting an easy tone ahead of what was expected to be a tense discussion given Trump's weekend statement about abandoning the Intermediate-Range Nuclear Forces (INF) Treaty.

Speaking at a news conference after the talks with Putin, Bolton emphasized that the U.S. has been confident that Russia has violated the treaty by testing and deploying a ground-based cruise missile.

He also pointed at China's massive intermediate-range capability as another key concern.

"The treaty was outmoded, being violated and being ignored by other countries," Bolton said. "Under that view, exactly one country was constrained by the INF Treaty — the United States."

He scoffed at critics' claims that the U.S. pullout would be destabilizing, pointing at the U.S. pullback from another Cold War-era arms control pact — the 1972 Anti-Ballistic Missile Treaty that was described as a cornerstone of strategic stability.

"It wasn't true then, and it will not be true now with the withdrawal from this treaty," he said.

He voiced skepticism that the treaty could be salvaged by forcing Russia to comply, pointing at Moscow's denials.

"One has to ask how you convince the Russians to come back into compliance with obligations they don't think they are violating," he said.

Earlier Tuesday, Putin's spokesman Dmitry Peskov said Trump took "a dangerous position" by deciding to abandon an existing nuclear weapons treaty with Russia without offering anything to replace it.

"Right now, we don't have any prospects whatsoever for a new deal," Peskov said. "It's important to figure out if it's possible or not."

The treaty was signed by U.S. President Ronald Reagan and Soviet leader Mikhail Gorbachev. It prohibited the U.S. and Russia from possessing, producing or test-flying ground-launched nuclear cruise and ballistic missiles with a range of 500 to 5,500 kilometers (300 to 3,400 miles).

China was not a party to the original agreement, and Trump argued that it should be included in the treaty.

Other Russian officials also emphasized the need for dialogue in their meetings with Bolton.

Russian Defense Minister Sergei Shoigu lauded Bolton for making a two-day visit and said that "even small steps will benefit our relations and help restore trust" between the two countries.

He added that Russia and the U.S. should build up their cooperation in Syria that helped to prevent major incidents in the sky or on the ground.

Bolton told Shoigu he was in Moscow to work on Trump's commitment to improve security cooperation with Russia.

"We certainly share your view that the U.S.-Russian discussions with respect to Syria have been useful, productive and professional, and we hope we can extend those conversations through a number of other ways that you mentioned, and even more," he said.

When signed in 1987, the INF treaty was lauded as a major safeguard for global security since they eliminated shorter-range missiles that take just a few minutes to reach their targets. The removal of such destabilizing weapons would in theory allow more time for decision-making in case of a warning of a missile attack.

The European Union warned Trump of a potential impact on European security if he decided to go ahead and leave the INF treaty.

An EU statement on Monday described the pact as an essential cornerstone of Europe's security structure, adding, "the world doesn't need a new arms race that would benefit no one and on the contrary, would bring even more instability."

Nataliya Vasilyeva in Moscow contributed to this report.