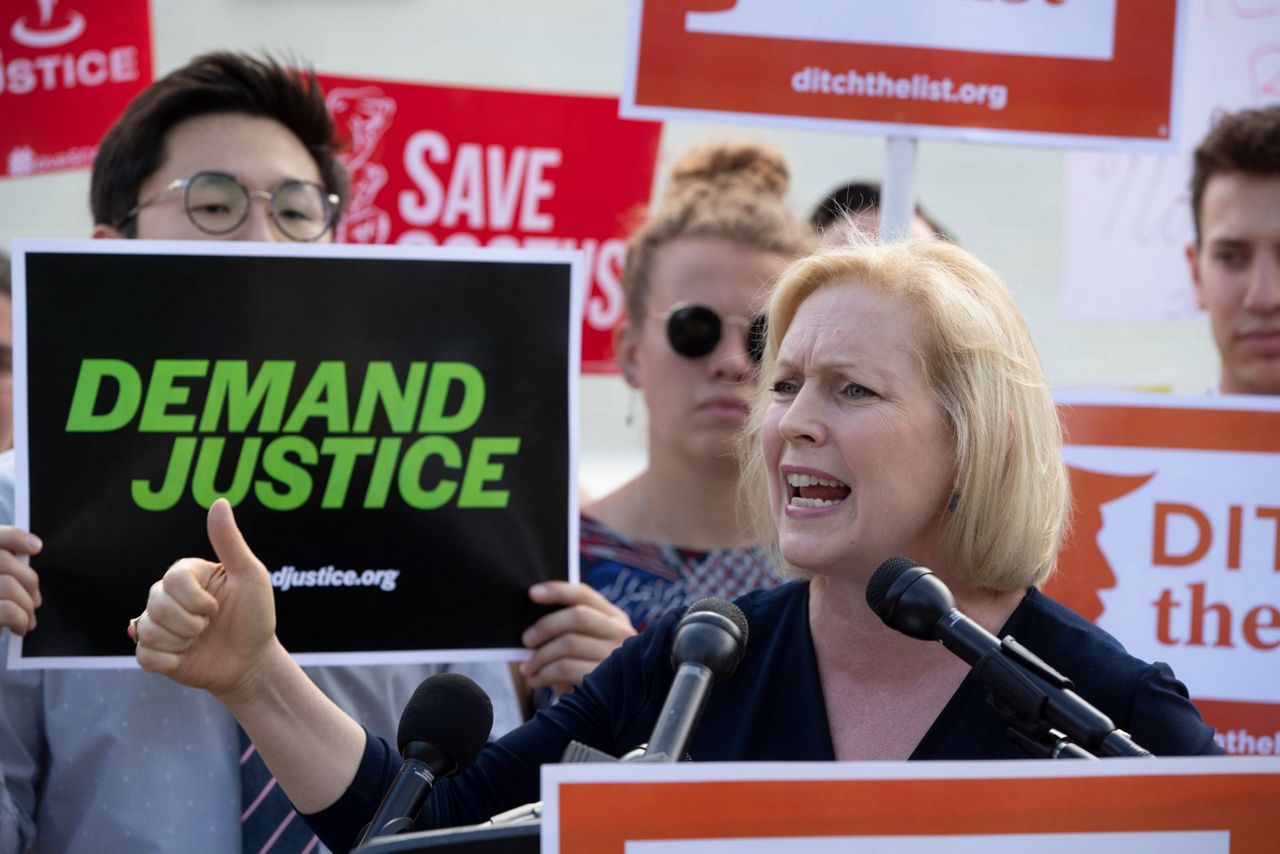 1 of 2
In this June 28, 2018 photo, Sen. Kirsten Gillibrand, D-N.Y., joins activists at the Supreme Court as President Donald Trump prepares to choose a replacement for Justice Anthony Kennedy, in Washington. Several prominent Democrats who are mulling a bid for the White House in 2020 sought to bolster their progressive credentials this week by calling for major changes to immigration enforcement, with some pressing for the outright abolition of the federal government’s chief immigration enforcement agency. Sen. Kirsten Gillibrand of New York has said Immigration and Customs Enforcement, known as ICE, has “become a deportation force.” (AP Photo/J. Scott Applewhite) 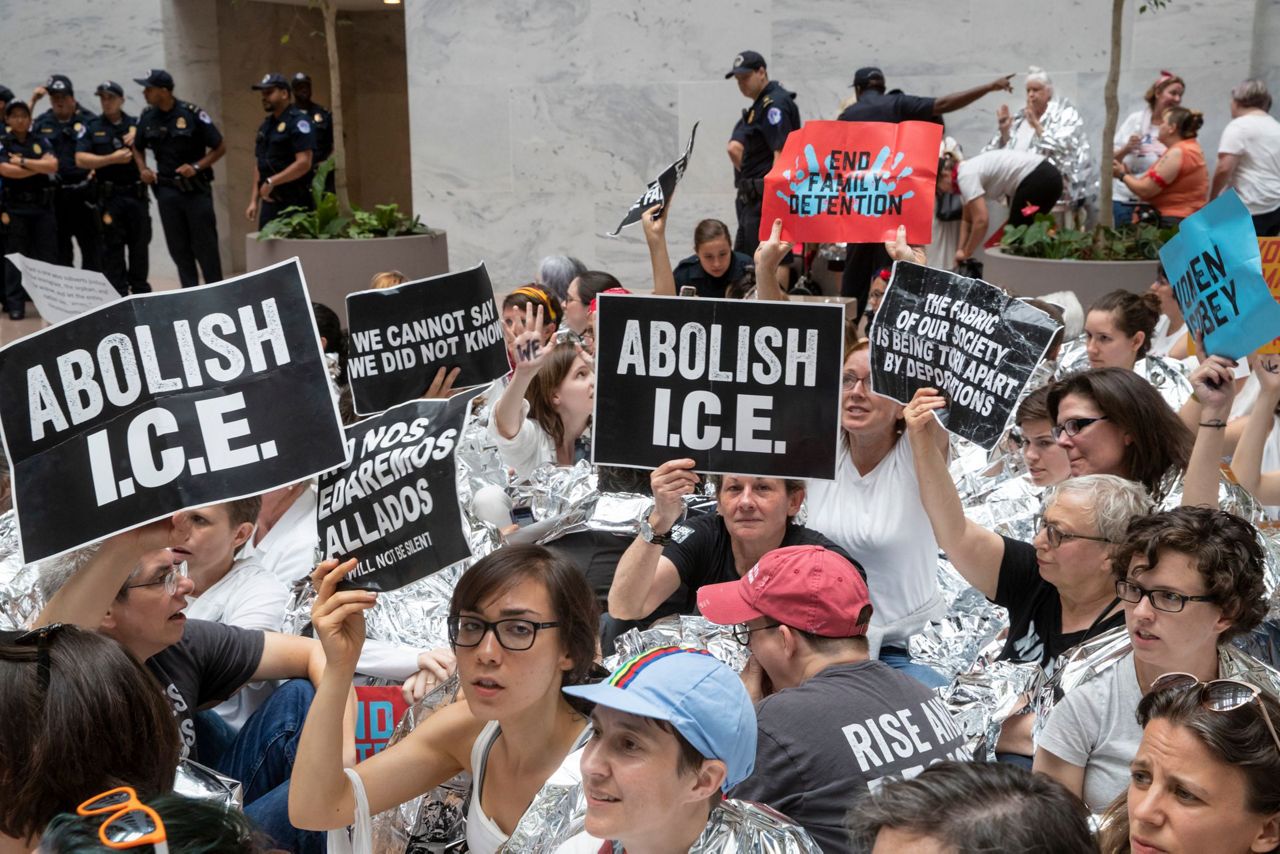 2 of 2
Hundreds of activists protest the Trump administration's approach to illegal border crossings and separation of children from immigrant parents, in the Hart Senate Office Building on Capitol Hill in Washington, Thursday, June 28, 2018. Several prominent Democrats who are mulling a bid for the White House in 2020 sought to bolster their progressive credentials this week by calling for major changes to immigration enforcement, with some pressing for the outright abolition of the federal government’s chief immigration enforcement agency. (AP Photo/J. Scott Applewhite)

Some Democrats with eye on 2020 say: 'Abolish ICE'

ATLANTA (AP) — Several prominent Democrats who are mulling a bid for the White House in 2020 have sought to bolster their progressive credentials by calling for major changes to immigration enforcement, with some pressing for the outright abolition of the federal government's chief immigration enforcement agency. President Donald Trump responded on Twitter Saturday that it will "never happen!"

Sen. Kirsten Gillibrand of New York said Immigration and Customs Enforcement, known as ICE, has "become a deportation force," telling CNN late Thursday "you should get rid of it, start over, reimagine it and build something that actually works."

Her comments follow similar sentiments expressed by Sen. Kamala Harris of California over the past week. In interviews with multiple outlets, she has said the government "maybe" or "probably" should "start from scratch" on an immigration enforcement agency.

Vermont Sen. Bernie Sanders, who sought the Democratic nomination in 2016 and is mulling another run, has stopped short of his colleagues' calls to dismantle ICE. But he has also been quick to note his vote opposing the 2002 law that paved the way for ICE to replace the old Immigration and Naturalization Service following the attacks of Sept. 11, 2001.

Trump tweeted Saturday morning from New Jersey that Democrats "are making a strong push to abolish ICE, one of the smartest, toughest and most spirited law enforcement groups of men and women that I have ever seen." He noted the agency's work to counter MS-13 gang members.

He urged ICE agents to "not worry or lose your spirit," adding: "The radical left Dems want you out. Next it will be all police. Zero chance, It will never happen!"

Housed within the Department of Homeland Security, ICE is in charge of executing hundreds of federal immigration statutes. The debate over the agency's future follows the widespread outcry in recent weeks after the Trump administration separated more than 2,000 migrant children from their parents. Marches are scheduled across the country Saturday to protest the policy, which Trump later reversed.

The Democratic calls to scrap the agency underscore the balancing act the party is facing on immigration issues. Such rhetoric could prove unhelpful to the 10 Democratic senators seeking re-election this fall in states Trump carried in 2016, where conservative views on immigration prevail. But calling for an end to ICE could be a winner for Democrats seeking to rally the party's base in the 2020 presidential primaries.

Many anti-Trump activists, who are driving the Twitter hashtag #abolishICE, have celebrated the moves by Gillibrand, Harris and others.

Nelini Stamp, the national organizing director for the Working Families Party, one of many progressive groups that ratcheted up its activity after Trump's election, called it a "critical moment" in the early maneuverings for 2020.

"Any Democrats who want to be the nominee need to stand on the right side of this," Stamp said. "Even if they don't say 'abolish ICE,' they can't not address it."

Angel Padilla, policy director at the grassroots group Indivisible, said ICE "terrorizes communities" and that Gillibrand's move "demonstrates where the progressive base is."

Still, not every immigrant advocacy group takes the same view.

Cristobal Alex, president of the Latino Victory Project, a political action group that backs pro-immigration candidates, rejected ICE as a "litmus test." But he said it's "heartening" that immigration policy in general "is at the forefront of the conversation ahead of 2020."

Their focus, Alex said, should be on "stopping the long-standing culture of corruption" in U.S. immigration policy and "the appalling practices" of the Trump administration, not on a move that by itself "amounts to rebranding."

Indeed, the would-be presidential candidates haven't yet detailed what they propose in ICE's place. Before the border separation crisis, Harris had introduced legislation that would curb the expansion of immigration detention centers. She and Gillibrand and others have at least hinted that they would want the Justice Department's prosecutorial power less involved in border security.

Whatever the details, the focus on ICE could cause problems for some potential candidates with more conservative records on immigration.

Former Vice President Joe Biden voted as a senator from Delaware for the 2002 law — the Homeland Security Act — that paved the way for ICE to replace the Immigration and Naturalization Service. He also voted in 2006 for a Bush administration-backed border security measure. Biden, however, has been critical of Trump's immigration policy as he considers a 2020 run. Earlier this year, Biden headlined a private event with the Latino Victory Project in Miami.

The activists pushing for ICE abolition, meanwhile, said they aren't worried about potential blowback or any difficulties for Democrats facing more conservative voters, including those potentially swayed by Trump's repeated charges that Democrats favor "open borders."

At the Working Families Party, Stamp said she sees the activists taking a position that "offers space" to other Democrats activists know won't agree with them. "We give them room to talk about better immigration policy," she said, comparing the circumstances to the civil rights movement, when Martin Luther King Jr., was viewed more favorably by white power brokers than more strident leaders like Malcolm X.

"Martin Luther King never said, 'Black power,'" Stamp said. "But having the left flank that did made the right folks willing to at least talk to King."