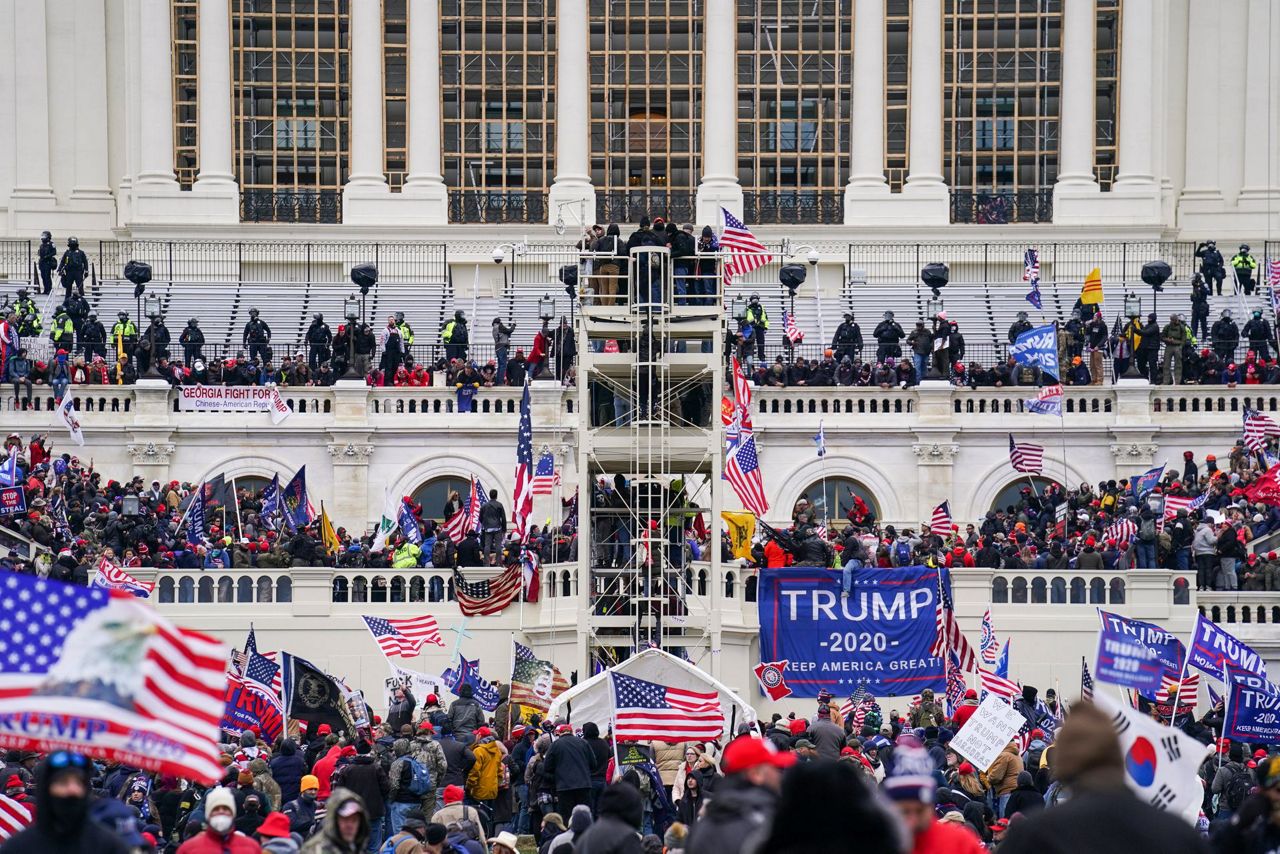 FILE - Insurrectionists loyal to President Donald Trump breach the Capitol in Washington, Jan. 6, 2021. Hatchet Speed, a U.S. Naval reservist who was assigned to an agency that operates spy satellites told an undercover FBI agent that he stormed the U.S. Capitol with members of the far-right Proud Boys extremist group, according to court records unsealed on Thursday, June 23, 2022. Speed was arrested on Wednesday in McLean, Virginia, on misdemeanor charges stemming from the Jan. 6, 2021, insurrection, including disorderly conduct in a Capitol building, court records show. (AP Photo/John Minchillo, File)

WASHINGTON (AP) — A U.S. Naval reservist who was assigned to an agency that operates spy satellites told an undercover FBI agent that he stormed the U.S. Capitol with members of the far-right Proud Boys extremist group and has espoused anti-government and antisemitic ideologies, federal authorities said in court records unsealed on Thursday.

Hatchet Speed was arrested on Wednesday in McLean, Virginia, on misdemeanor charges stemming from the Jan. 6, 2021, insurrection, including disorderly conduct in a Capitol building, court records show.

The FBI says Speed, whose birth name was Daniel Abraham Speed, is a petty officer first class in the U.S. Naval Reserves and was assigned to the Naval Warfare Space Field Activity at the National Reconnaissance Office. Authorities believe Speed is currently unemployed, a prosecutor said in a court filing. Court records don’t list a defense attorney for Speed, who is scheduled to make his initial court appearance in Washington, D.C., on Thursday.

The National Reconnaissance Office operates U.S. spy satellites used by the Pentagon and intelligence agencies. The secretive agency has an important role in the U.S. intelligence community, which relies heavily on satellite imagery to monitor global hot spots like Russia’s war in Ukraine.

The agency said Thursday that Speed's assignment at the NRO began three months ago and that he was not part of the reserve unit at the time of the riot.

“He has not had access to NRO facilities or systems at any point during his administrative assignment,” the agency's statement said.

Speed recently worked in Vienna, Virginia, as a software developer for Novetta Solutions LLC, a defense contractor that conducts advanced analytics for the Defense Department and other federal agencies, the FBI said.

In March, Speed met with with an FBI undercover employee who “presented to Speed as a like-minded individual,” an FBI agent said in a court filing. Speed told the undercover agent that going to the Capitol on Jan. 6 “was always the plan” and said he went there with friends who were Proud Boys members, the filing says.

“We would listen to Donald Trump then all of us would go to the Capitol. Now the reason we were going to the Capitol was to protest what was going on in the Capitol … what they were doing was counting the ballots,” Speed said, according to the FBI.

Speed also said a larger crowd could have compelled House Speaker Nancy Pelosi to resign “out of fear for her life," an FBI agent wrote.

“He also observed that ‘there are too many Americans that have this idea that we have to be peaceful at all costs,’” the agent added.

Video captured Speed entering the Capitol through the Senate Wing Doors and exiting the building through a window more than 40 minutes later, according to the FBI.

Prosecutors are seeking a court order requiring home detention with location monitoring for Speed after his release from custody. They say his statements and conduct show that he poses a threat of violence to the community.

After the Capitol riot, Speed bought at least 12 firearms over the span of a few months and spent more than $50,000 at firearm and firearm-part retailers, a prosecutor said in a court filing.

"This firearm-buying spree is alarming in light of statements that Speed has made in which he has espoused the use of violence to further his anti-government and anti-Semitic ideologies," Assistant U.S. Attorney Alexis Loeb wrote.

In April, Speed told an FBI undercover employee that he has contemplated using violence to further his antisemitic beliefs and discussed using violence against members of the Anti-Defamation League, a Jewish civil rights organization.

“He said that the ADL promoted the recent anti-lynching bill and that the bill was being passed because 'they know things are ... going to get bad enough, that people like us are going to band together and straight up start lynching people,'” Loeb wrote.

Federal agents said they seized eight firearms and seven silencers when they searched Speed's home, vehicles and a storage unit. They also said they found approximately 25 other firearms belonging to Speed’s housemates.

Approximately 40 Proud Boys leaders, members or associates have been charged in the deadly Jan. 6 siege. Former Proud Boys national chairman Henry “Enrique” Tarrio and four other men are charged with seditious conspiracy for what authorities say was a plot to forcibly oppose the lawful transfer of presidential power after Trump lost the 2020 election to Joe Biden.

The charge against Speed comes months after an intelligence contractor alleged he was fired for reporting the circulation of racist and misogynistic comments on classified intelligence community chatrooms. The fired contractor, Dan Gilmore, wrote in a blog post that “many employees” across the community have posted that they believed the Jan. 6 attack was “justified.”

A spokeswoman for the Office of the Director of National Intelligence declined last month to comment on Gilmore’s allegations but said that people “who engage in inappropriate conduct are subject to a variety of accountability mechanisms, including disciplinary action.”

The NRO and Novetta Solutions did not immediately respond to requests for comment on Speed’s arrest.